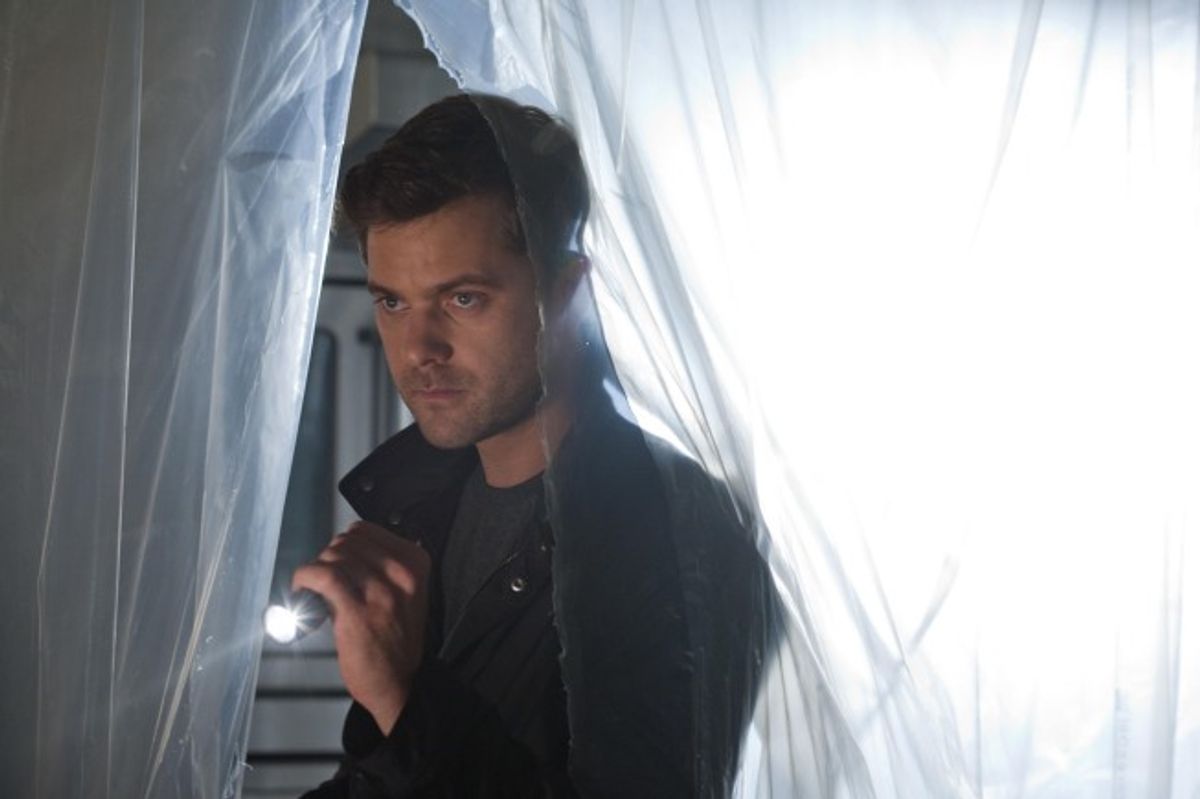 I had worked hard for nearly two years, for the sole purpose of infusing life into an inanimate body ... I had desired it with an ardour that far exceeded moderation; but now that I had finished, the beauty of the dream vanished, and breathless horror and disgust filled my heart. - Victor Frankenstein

This episode of "Fringe" was literally a monster-of-the-week episode, as it explored a topic well covered in such classic works as "Frankenstein" and "Re-Animator": a mad scientist attempting to bring a dead body back to life. However the episode also touched on a more interesting theme -- the idea that sometimes things can never be the way they used to be, no matter how much we might wish it so. This applies not only to the dead ballerina that the main villain is attempting to revive, but also to Olivia's old life, which has been irrevocably tainted by Alt-livia's actions on Earth-1. Alt-livia's violation of Olivia was pretty complete -- there's no place in Olivia's life that isn't tainted by her: Alt-livia's icky body sweat is all over her apartment, she's forever lost the chance to be a giddy new couple with Peter, and even work sucks because everyone knows her shame.

In any case, hearts are stolen, eyeballs are scooped, the dead rise and Walter makes me laugh about a dozen times -- in other words, this was a vintage Fringe episode.

The show opens as we see our first unfortunate victim departing a train. A creepy looking guy in a suit follows him, and uses the old Soviet assassin method of applying a sedative or poison by using a hidden injector in the end of an umbrella. Shortly after the victim gets home, the poison kicks in and knocks him out. The man wakes back up and discovers he's accidentally wandered onto the set of one of Dexter's kill rooms -- he's strapped to a table with plastic wrap and Creepy Guy is hovering over him with a huge needle. I'm going to warn you now: The gore factor is pretty high in this episode, and it starts right here as Creepy Guy stabs the victim in the neck (aieeee!) and then goes about cutting his heart out and leaving him alive with a rib spreader still left propping open his now empty chest cavity (double aieeee!). At least Creepy Guy is courteous enough to call 9-1-1 before he leaves, so someone can come find the poor guy.

Walter and Peter prepare to drive to the crime scene, but the elder Bishop is distracted by his new favorite topic: namely, the accidental boning of the wrong Olivia by Peter. Walter urges Peter to tell Olivia the truth about his relationship with Alt-livia. There's a touching moment where Walter sadly reminds Peter that his son knows all too well how emotionally devastating some secrets can be. Peter agrees with his father and assures him that he'll tell Olivia as soon as possible. I must say, the Bishop men have a great easy chemistry here, and it really does seem like this new situation has helped bring them closer together.

Of course, when Peter promised to tell Olivia "soon," he really meant "in three to four weeks when she comes back from leave," so clearly he's a little uncomfortable when she rolls on up with Broyles to the crime scene. Awkward! Luckily, there's organ theft afoot to investigate, so Peter is able to delay that conversation for now.

I was going to make the Tin Man joke here as they discuss the victim's empty chest cavity, but Walter beats me to it. Walter is excited when he hears the report that the victim was alive for some time even after his heart had been removed.

Because the chest is nice and open and really lets the light in, the team is easily able to note that the man had recently been a heart transplant recipient, so it's off with Peter and Olivia to see the transplant doctor. While they're waiting for the doctor to see them, Peter and Olivia have The Talk. Here's how it goes:

Peter: Yeah, so I kind of noticed that Alt-livia smiled more and was less uptight than you, but I just wrote it off as part of our new relationship. Also, she was totally more fun than you, so... yeah, didn't really want to dig too deep into those weird ticks I noticed about her.

Olivia: By applying logic and facts, I can justify how no one realized I was gone, not even you. IN NO WAY DOES THIS BOTHER ME bwahahahahaha... *sob*

I may be paraphrasing a bit, but you get the general idea. Olivia lies (badly) and tells Peter that she understands completely and it's no big deal. Peter continues his campaign of self-denial and seems to drop the issue for now.

The investigation presses on, so the rest of the awkward conversation will have to wait till the third act of the show. The team quickly realizes that several other victims have had their organs stolen in the same fashion and more importantly, all the stolen organs came from the same victim -- a 17-year old ballerina named Amanda. After talking to Amanda's mother, they learn that Amanda was clinically depressed and despite trying everything from medication to various depression group meetings, she still ended up committing suicide.

Awkward advertisement of the night: Peter stepping out to take Astrid's call. Hello product placement! Did you know that you can do video chat with your fancy Sprint phone? Because you totally can. Witness Astrid's giant head fill the screen, as an inset of Peter hides in her afro. Don't you wish you had a fancy Sprint?

Totally awesome advertisement of the night: The decision to place an advertisement for the new Natalie Portman film Black Swan in the middle of this episode. Creepy ballerinas -- they're the new black!

The team realizes that there's one more organ recipient still left out there but they get to him too late. In a scene I can never unsee (no pun intended), the guy turns and we see that his eyes were nailed open and then scooped out. Arrrgh! If there's one thing that gives me the willies, it's violence done to eyeballs.

If you thought that was unsettling, you'll love the next scene, where we see that Creepy Guy (nee Roland Barrett) has stitched Amanda's body back together and strapped her into this creepy and horrific contraption that allows him to make her limp body dance. Roland weeps as my skin crawls at the whole macabre sight.

Peter sorts through the files on the various groups Amanda attended, somewhat coldly remarking, "You'd think someone working that hard at being okay would get some pay off." Olivia looks upset at the comment, as she's spent an earlier scene weeping in her apartment as she hysterically stripped the sheets off her bed and attempted to wash Alt-livia's stank off of them, only to find Peter's clothes in her washing machine. Peter, of course, misses this reaction. Jesus, read the room, Peter!

Peter then fails to react to Olivia's passive aggressive observation that whoever is out there fighting to give Amanda back her life clearly loves her. This is really the crux of Olivia's grief here -- the realization that while she was trapped on the other side, Peter wasn't fighting for her at all, he was just giving in to the easy manipulations of her doppelganger. Compare that to Roland Barrett, who the team discovers in the roster of one of the depression groups Amanda belonged to and who fits "I love you enough to re-animate you!" profile to a tee. The team takes off to go find Roland.

Roland revives Amanda, but she's not exactly brimming with gratitude for her savior. Mostly she just drools and rolls her eyes crazily around. Roland is upset that the meat puppet formerly known as Amanda isn't what he expected her to be, but he doesn't have a lot of time to do much about it, since the Fringe team picks that moment to break into his house.

After a tussle, Olivia captures Roland, who grieves because even though all the pieces are in place, it's not Amanda, just a shell that looks like her. His statement "I looked into her eyes and I knew it wasn't her" really hits home for Olivia.

This comment sets the stage for Olivia's final confrontation with Peter as they close out the crime scene. Olivia weeps and tells Peter that while logically she knows that Alt-livia was trained to replace her, she still can't forgive him for not realizing that it wasn't her. And really -- Alt-livia was pretty much the world's worst liar, so there's so merit to Olivia's grievance here. Still, there's a world of difference between Roland realizing that a floppy, brain-damaged, franken-version of Amanda isn't the same person, and Peter's inability to realize the the sexy and fun identical twin of Olivia isn't actually her. In that sense, Olivia is being a bit unfair with the apples and oranges comparison, but it is what it is, and Olivia can't let it go. And so, before Peter and Olivia's relationship can even truly begin, it's over, because Olivia doesn't want him anymore. It's all very sad and emotional. Anna Torv just knocks this scene out of the park.

The episode ends on a high note, as we see that our favorite baldy the Observer is back. Yay! Looks like the Observers will be playing a larger part in the upcoming episodes, as he watches Walter Bishop from afar and reports on him. Unfortunately, it seems we'll have to wait to see where this new plot takes us, as there are no more new Fringe episodes until January 21st, when the juggernaut that is American Idol steals the Thursday time slot and pushes Fringe into the Friday night slot (a.k.a. "the slot that killed Firefly", a.k.a. the "oh god the show's gonna get cancelled slot!").

While I enjoyed the last eight weeks of alternate universe hijinks, this week's episode reminded me of what I had been missing from the earlier seasons. Alt-livia/Olivia were always the focal points by necessity in the first eight episodes, but that ended up drawing away attention from characters like Walter who played more of a background role than I would have liked. This week he was back in rare form and I felt like his scenes with Peter had a nice flow that was lacking up till now. It's nice to know we'll be back with our good old regular Earth-1 team for the foreseeable future. Overall, this week was really well done -- very effectively creepy, well directed and plotted with just the right about of gore to make you jump.

Summary: If you're going to steal an organ from me while I'm still conscious, just please don't let it be my eyeballs.