My folks, my illegal car and the Salvadoran police

I was driving my family to the airport when two officers asked to see registration. One problem: I didn't have it 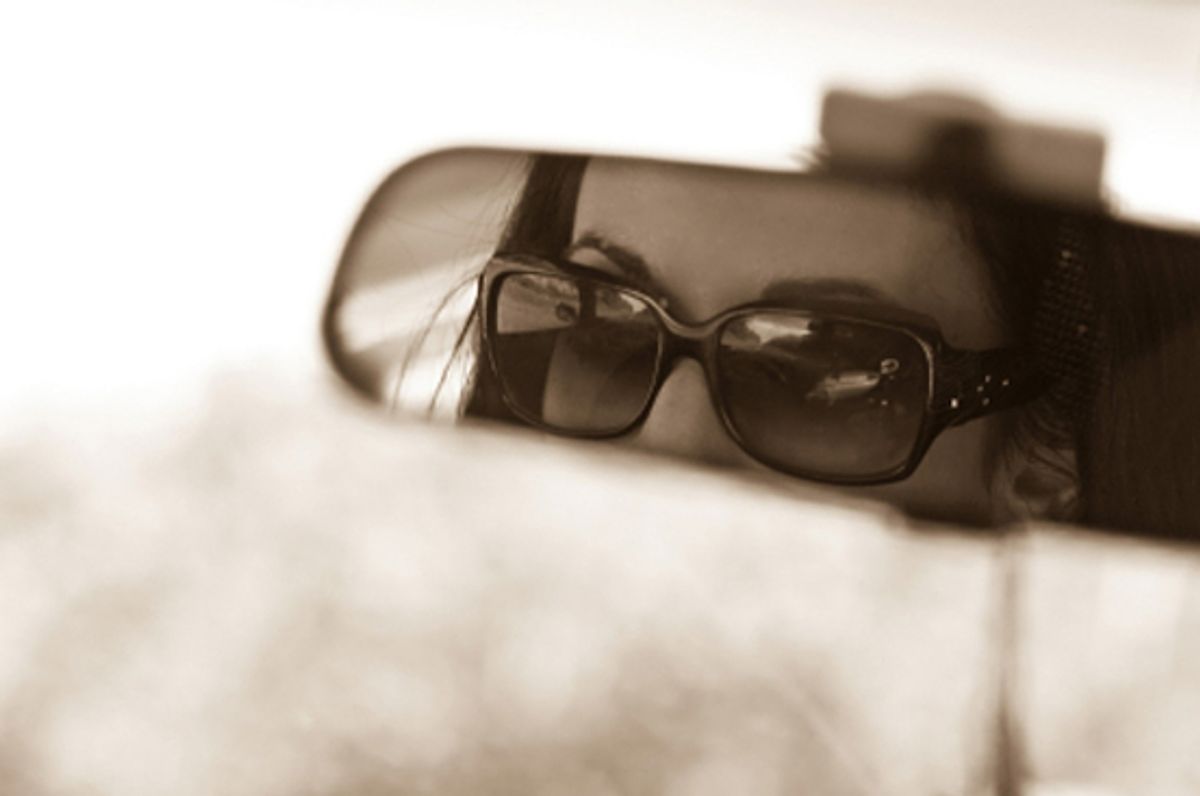 The face of a young woman driving as seen in the rear view mirror. (Unknown)
--

"You'd just better make sure you know how to say 'You are not taking my daughter's car away from her!' in Spanish," my mother quipped to my father.

In the rearview mirror I squinted at my folks and the rest of my family — my brother Clayton, my sister Stephanie, and my best friend Laura -- all packed in with their luggage. I was driving them to the beach -- in my illegal Volvo.

That Christmas, I was in my second year teaching in a private bilingual school in San Salvador. The school was an oasis -- brilliantly draped in bougainvillea and reeking of gardenias -- fenced off from the grit and guns of post-civil war Salvador with towering white walls laced with razor wire. I could have just served my family margaritas at the pool like proper oligarchs, but for their holiday visit, I was determined to give them a glimpse of the real country as I was just beginning to know it. So that week I'd taken them to the old body dump that's now a public park, and to a pupuseria perched on a seismic precipice, and north past the Santa Ana trinity of volcanoes to Guatemala and back. Now it was their last day -- all I had to do was get them to the Pacific for a dip, and then I'd ditch them at the airport. And nothing had gone irrevocably wrong. Yet.

Ordinarily, driving my illegal car was an acceptable risk. But with my family -- my mother -- on board, all that ran through my head was the image of us, six conspicuously Caucasian Americans and a pile of Land's End duffel bags, standing stranded on the yellow dust shoulder of Salvador's once infamous Airport Road, while my precious Volvo pulled away from us and disappeared behind a puff of that black school bus exhaust.

In the months since I'd purchased the car from a departing diplomat, I had fought my way through miles of tangled Third World red tape trying to get license plates, but all I had to show for it was a number that I'd marked on the inside of a Raisin Bran box and taped in my rear window and a file full of paperwork that was not in my name but I hoped had "Embajada de los Estados Unidos" stamped on it enough times to snow any Salvadoran policeman.

"That's right," I interrupted a backseat spat. "Dad and Clay are not going to out-macho some Latino guy who's holding a machine gun," I pointed out.

"Hey, what are you saying?" my brother shot back.

They all liked this. My brother and father because they had been absolved of any responsibility and my mother, best friend and sister because they liked the idea of standing up to authority as women's work.

"See? I'm not supposed to talk," my father bragged, and the chatter in the backseat continued in this new vein.

That late December day on the Airport Road was crystalline, the windy season tapering off into Salvador's summertime, so I could see the officer -- a black ripple in the heat -- from a long way off.

It was a standard checkpoint: One line of orange cones blocking the right lane and then, some 10 yards later, another line blocking the left lane. Vehicles had to maneuver between the two, giving the officers a good look at each, its occupants and its license plates -- or lack thereof.

I had passed through many such checkpoints, Raisin Bran box and all, and I'd never been flagged. I slowed down. I blinkered. But just as I had feared, the officer in the road raised his right arm and flapped his hand at me.

With a sense of doom, I pulled off the highway into the dust.

"I'll need that file out of the glove box, Laura, and my carnet, that little green book in my purse," I said hoarsely. "And my New York driver's license. It's in my wallet."

With that, the officer was at my open window, machine gun in hand.

I handed him my carnet and license.

Rather than confess that I didn't have a blue card to prove I owned the car (it would come with my placas), I passed over a photocopy of the previous owner's. Then I babbled whatever I could think of -- within and beyond my vocabulary -- about the police, the U.S. Embassy and my quest for placas. To prove my point, I handed over my file.

The officer looked at me, then at the file, then back at me. He gestured for me to open the hood in exaggerated sign language. My heart sank; he hadn't understood a word I'd said.

"¡Hola!" I heard my mother chirp at a second officer who was watching us.

The man leaned over and looked in her open window, his grip firm on the gun slung across his chest.

"Estamos aquí para visitar mi hija," my mother announced. Except the words came out like: "Me hee-haw."

The officer's face softened. He said something back to her in equally garbled English. Soon the two were chatting up an unintelligible storm.

Clayton and my father, with uncharacteristic obedience, were silently trying their best to be invisible. Laura, our even keel, sat quietly in the front seat, watching everything.

As I peeled my damp thighs from the Volvo's vinyl seat and climbed out, it occurred to me that I had never thought of my mother as disarming. In New York, she was a scrapper who aimed below the belt. But lo. Her officer had just released one hand from his gun to gesture with. So my mother had grasped, in an instant, the steps of this diplomacy dance.

In the meantime, the officer was interrogating me. Where I was from. What I was doing in Salvador. How long I had been in the country. I felt faint, but somehow I kept my answers eager and chatty. When I told him where I taught, the questioning morphed into a game of "Do You Know So-and-So?"

This wasn't necessarily good. El Salvador is a small country, but my wall and razor-wire world was exponentially smaller.

"Raúl …" I pretended to mull over the name. And then it struck me: I did know Raúl.

Raúl was a maintenance man who liked to practice the English he'd learned installing swimming pools in L.A. He had an affected back-slapping manner -- no doubt also acquired in California -- that was distinct from the dropped or darting eyes of most of the school's support staff. I liked Raúl and spoke with him often. I told this to the officer.

Gradually it didn't matter that we could not find the chassis number on the Volvo to match the papers. It didn't matter that all I had was a Raisin Bran box for a license plate and a file full of papers stamped "Embajada de los Estados Unidos." What mattered was that I knew and liked Raúl and Raúl was this man's friend.

We had been vulnerable and human -- a young woman, a mother -- and however little we could communicate, the officers understood that better than anything.

The first officer put down the hood of my car for me and walked me to the driver's side door and we shook hands, gringo-style.

"¡Que tengan un buen viaje!" he wished my family for their visit to his country.

A bit dazed, I put my car in gear and pulled back onto the highway. In my rearview mirror, my family was waving out their open windows, and on the shoulder behind us, a pair of armed men were waving back.

"You see?" I cocked an eyebrow in the mirror at my family.

"Well. I did just what I was supposed to!" my father bragged.