Get ready for the most conservative Congress ever

By my estimate, the total number of moderate Republicans in the next Congress will be ... three 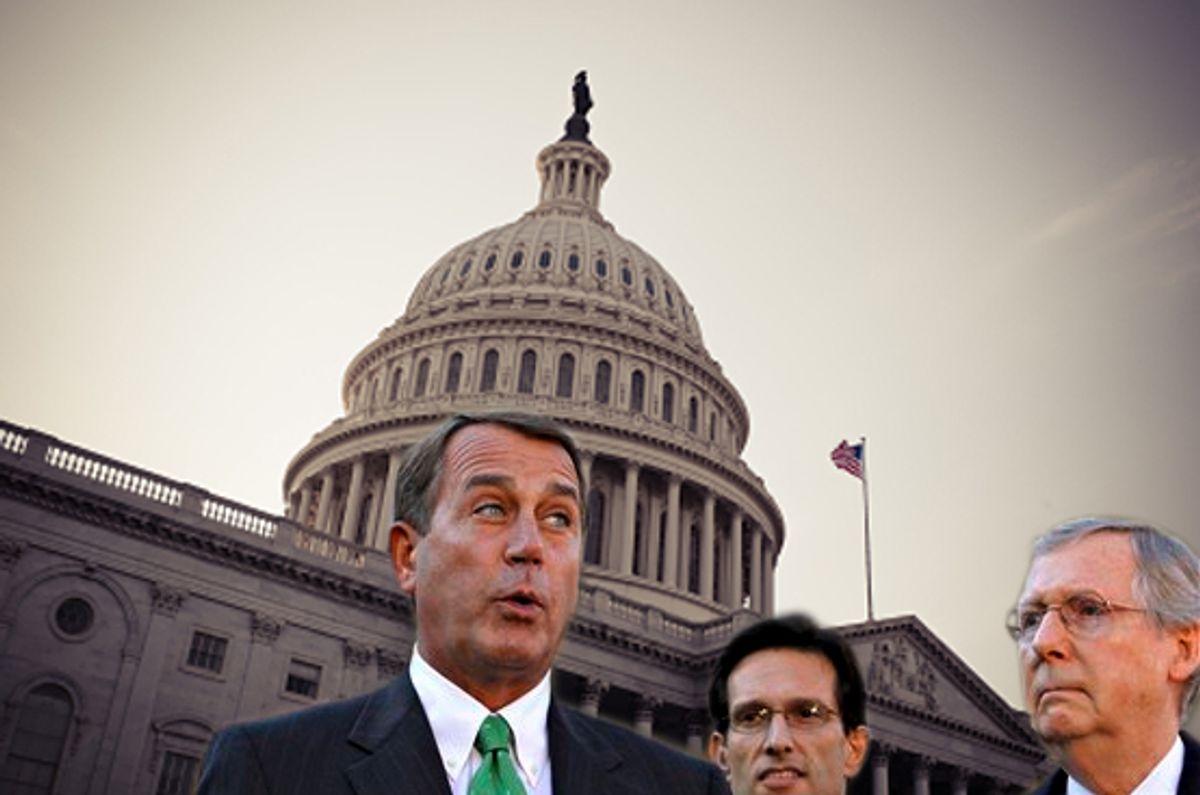 "I am hoping this won't be the last time we can do something for the country on a bipartisan basis." -- Senate Minority Leader Mitch McConnell, this past week

Although the recent agreement between President Obama and Republican congressional leaders to extend all of the Bush tax cuts for two years has been strongly criticized by many liberal Democrats, it has received considerable praise from some prominent members of the Washington commentariat, including David Broder of the Washington Post and David Brooks of the New York Times. In the aftermath of big Republican gains in last month's elections, these political observers see the tax cut agreement as a possible sign of a new willingness on the part of the president and congressional Republicans to work together in the next two years to find bipartisan solutions to the difficult problems facing the country.

But while it would be nice to believe that a new era of bipartisanship is about to break out in the nation's capital, a close examination of the results of the midterm election, and especially the composition of the new House of Representatives, suggests this is highly unlikely. What's much more likely is that the tax cut agreement will turn out to be a one-time deviation from the internecine partisan warfare that has characterized Washington in recent years. In fact, it is very likely that partisan conflict will only intensify over the next two years.

Republicans will have 242 seats in the new House. This will be the largest Republican majority in the House of Representatives since the 80th Congress (1947-49), which also had 242 Republican members.

In order to estimate the distribution of ideology in the new House of Representatives, I used liberal-conservative ratings from the 111th Congress and assigned every newly elected member a liberal-conservative rating based on the average rating of members of their party from the same state or, when that was not possible, from a neighboring state, in the 111th Congress. Ratings were based on the a widely used scale developed by political scientists Keith Poole and Nolan McCarty. This procedure may actually underestimate the conservatism of the newly elected Republicans since it assumes that they will vote similarly to Republicans elected before the Tea Party movement emerged as a major force in the GOP.

The results of this analysis indicate that the new House of Representatives will be much more conservative and much more ideologically polarized than the old House. The location of the median member will shift from slightly left of center in the 111th Congress to well to the right of center in the 112th Congress due to the replacement of a large number of moderate Democrats with conservative or very conservative Republicans. In addition, the total number of moderates in the House, almost all of whom were Democrats, will shrink from 75 in the old House to 28 in the new House. As a result, the ideological distance between the median Democratic representative and the median Republican representative will increase dramatically.

Moderate Republicans have been disappearing for some time and are now a truly endangered species. According to my estimate, there will be only three in the new House. Meanwhile, moderate Democrats, who held the balance of power in the old House, will see their numbers drastically reduced in the new House. The most likely result will be two years of continuous confrontations in almost every major policy area between President Obama and a Senate in which the balance of power is still held by moderate Democrats as well as a House dominated by conservative Republicans to a greater extent than at any time in the past 60 years.

Alan I. Abramowitz is the Alben W. Barkley Professor of Political Science at Emory University in Atlanta, Georgia. His newest book, "The Disappearing Center: Engaged Citizens, Polarization and American Democracy," was published in 2010 by Yale University Press.