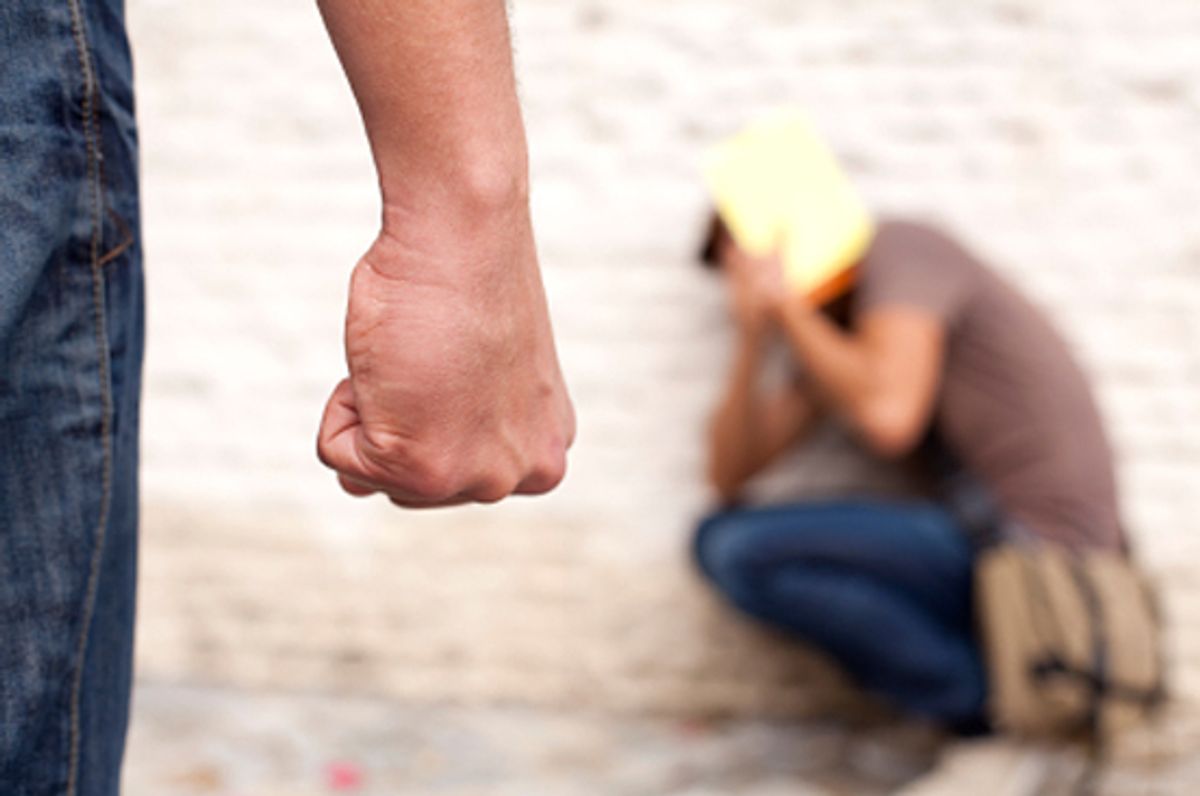 When 18-year-old Rutgers student Tyler Clementi jumped off the George Washington Bridge on Sept. 22, he meant to kill himself -- he probably didn't mean to spark a national uproar. But Clementi's death, along with a series of ensuing gay teen suicides, has prompted an intense conversation over the problem of anti-gay bullying. Dan Savage's "It Gets Better Project," a video project aimed at gay teens, has solicited heartbreaking  contributions from everyone from President Obama to Tim Gunn (who admitted his own early suicide attempt) to the employees of Google.

But gay suicide is hardly a new problem -- and, by most accounts, homophobia is on the decline in American culture. So why are we suddenly so concerned? As Stuart Biegel, a professor at the UCLA School of Law, explains in his new book, "The Right to be Out," anti-gay prejudice remains a pervasive problem in American schools. Despite tremendous legal strides  over the past two decades, gay students are still punished more severely than their straight counterparts, their pleas for help are often ignored, and, most surprisingly, many LGBT teachers still feel enormous pressure to remain in the closet for fear of reprisal from parents.

Salon spoke to Biegel over the phone about the current state of gay bullying laws, what parents can do if their kids are attacked and the flaws of the "It Gets Better" campaign.

In the last few months there's been a tremendous amount of media attention paid to gay bullying. How important do you think it's been?

I think it's very significant. For a long time, these issues haven't been discussed openly. When people would mention words like gay and lesbian in airports and restaurants they would lower their voices. We're only recently seen what may be a turning of the tide. Now there's less lowering of voices and more comfort in addressing these issues openly in schools and at the dinner table.

But gay suicide isn't anything new --- so why have these recent deaths attracted so much more attention than the ones that have come before?

Suicide has been an issue in LGBT communities for a long time, and LGBT youth have been found to have a suicide rate three to four times higher than their straight counterparts. But I think what's happening now, with this particular rash of suicides is that you have families who have been open about what happened. This goes back a few years, to the mother of Carl Walker-Hoover. There used to be so much shame associated with these suicides. Now my sense is the families are more comfortable opening up about them and the media is more comfortable reporting about them in great detail.

But surely, the culture as a whole has also become far less homophobic than before.

It is on the wane, and you see a lot of data supporting that. But there has been something of a backlash in some places, in light of the sea change in legal recognition of same-sex relationships over the past decade. When Howard Dean signed the first civil union legislation in Vermont in 2000, people couldn't believe it. Ten years later we have civil unions in eight or nine states and legal marriage in nine or 10 countries and five states, including Canada, D.C., Mexico City. This amount of change is unsettling for a lot of people, and the schools are a place where a lot of these values issues are heavily contested. In a number of schools, at this point, we see a situation that might actually be worse than 10 years ago.

How widespread is anti-gay bullying in schools at this point?

It can vary tremendously, not only from district to district, but from school to school with any district. I was the federal court monitor for the San Francisco schools for almost a decade -- from 1997 to 2005 -- and we found in San Francisco, a city that's very gay-friendly, schools that had some really difficult situations with regards to homophobia and peer mistreatment.

What determines whether a school is gay friendly or non-gay friendly?

A lot of it has to do with the school culture as it's evolved over time and a lot of it has to do with whether a school is known to be a sports school. While sports can be incredibly beneficial, in many cases school athletic departments have the largest percentage of homophobia of any department in the school, if you can characterize it that. The leadership of the school as a whole can play a key role: whether the school focuses at all on school climate, on issues of respect and not tolerating the word gay as a pejorative term. But it's not static, and there's a tremendous amount that individual educators can do here.

I’m 26, and my coming out narrative wasn't terribly traumatic -- I don't think I've ever really felt bullied for being gay. I think that's the case for a growing number of young gay people -- and I think it can be fairly easy for us to forget that not everybody had it so easy.

From time to time, I get frustrated reading articles in places like the New York Times that seem to suggest it's over, that kids are doing fine now. You don’t see that after this recent spate of suicides, but for several years before that you had some of the most noteworthy commentators in the country concluding that gay is no big thing anymore, we need to move on. I look at my law students, and my law school is a very gay-friendly place, and it has the Williams Institute, which is the national think tank on sexual orientation and gender identity issues, and you have a lot of openly gay and lesbian students who had coming out experiences such as the one you described for yourself.

But there are others who aren’t even out to their parents, and they’re in their mid-twenties -- they’re openly gay or lesbian on campus and yet for many reasons they’re not out to their family. And this is 2010. There’s tremendous variation from place to place, from community to community, from ethnicity to ethnicity. It’s a stereotype to say it's tougher on the rural communities and in the South and parts of the Midwest — but it is often tougher in these parts than it is on either coast or in urban areas.

Why are school environments so loaded with significance for LGBT kids?

You have to go to school every day and you're often surrounded by people you may not choose to be around. We are an increasingly pluralistic society, especially in the major urban areas of the country, so that diversity is reflected on many levels and in different sets of values that students bring to the table.

How much legal recourse do parents actually have if their kids are bullied in school, and teachers won't do anything about it?

More legal recourse than ever. Basic negligence laws regarding threats and harassment exist everywhere. The Nabozny case in Wisconsin was the first time that an LGBT student won a case against the school district for discrimination. The mistreatment was horrific -- and once that breakthrough happened and the federal courts recognized that the equal protection clause of the 14th Amendment does apply to the mistreatment of gays and lesbians, LGBT kids started winning these cases all the time, in all parts of the country. Some states have prohibited discrimination on the basis of sexual orientation, and a growing number have also started to prohibit discrimination explicitly on the basis of gender identity and, finally, states such as California have explicit education code provisions addressing the areas of LGBT safety. The law is on the side of the mistreated youth everywhere in the country.

But, as you point out in the book, gay, lesbian and transgendered teachers are actually more legally vulnerable than the students.

There's been so much focus on LGBT youth and rightly so, but not as much focus on educators. In many parts of the country, sizable numbers of parents and particularly size able numbers of folks in conservative religious communities are not comfortable with the idea of a gay or lesbian or transgendered person teaching their kids. Even though in the public sector educators do have the right to be out, there is great pressure on them to remain closeted and keep their identities to themselves. Instead of seeing LGBT educators as a valuable resource who can help LGBT youth, too many school districts are trying to keep them under wraps, so to speak.

No question. As an openly gay man myself who was a public school teacher, and very closeted at the time, I know those pressures. And I agree that they're increasingly anachronistic, but it's a tricky transition period we're in right now.

In recent months, there's been a lot of coverage of Dan Savage's "It Gets Better" campaign. Talking to friends, I think it's fair to say there's a lot of disagreement about whether or not it's the right message to kids. It's obviously good to know that when you're grown up you won't be faced with the same amount of prejudice you are now, but it also seems to suggest that you should just passively wait for things to improve, and a lot of the videos just seem self-congratulatory.

I was just meeting with one of the co-chairs of our law school's LGBT student association the other day, and he mentioned exactly the same thing. I understand the debate. I think it's good that people are taking seriously the notion that we need to do more in this area, but I also think it's important o recognize that if we're passive and let time pass by, things don't necessarily always get better.

At the very least, I think "It Gets Better" has caused a conversation that I don’t think would have occurred otherwise -- and that's good.

I agree. And the Prop. 8 trial and the high profile nature of that campaign and its aftermath also has had a very positive impact. So many conversations are happening at the proverbial dinner table that were not happening before Prop. 8 -- young people talking with the older members of their family about these issues for the first time, and straight young people as well. I’m convinced, and it’s a key part of my book, that increasing openness is only going to help make things better.

Obama recorded his own "It Gets Better" video -- but his record so far on LGBT issues hasn't been what a lot of people have hoped it would be. What are your feelings on that?

Obama is in a very difficult situation. I don't have any intimate or expert knowledge on Obama's presidency, but it does seem to me that if you look at the history of the United States, Obama is the most gay friendly president we've ever had. Having said that, there's no question that he's been able to fulfill only a small number of the promises he made to LGBT people during his campaign. But there is the potential for a lot more to be accomplished, especially if he gets another term, and Sotomayor and Kagan are going to be very supportive of LGBT related cases that have come up on the Supreme Court. I guess I'm the perennial optimist.