A judge rules part of the Affordable Care Act is unconstitutional. Republicans should be careful what they wish for 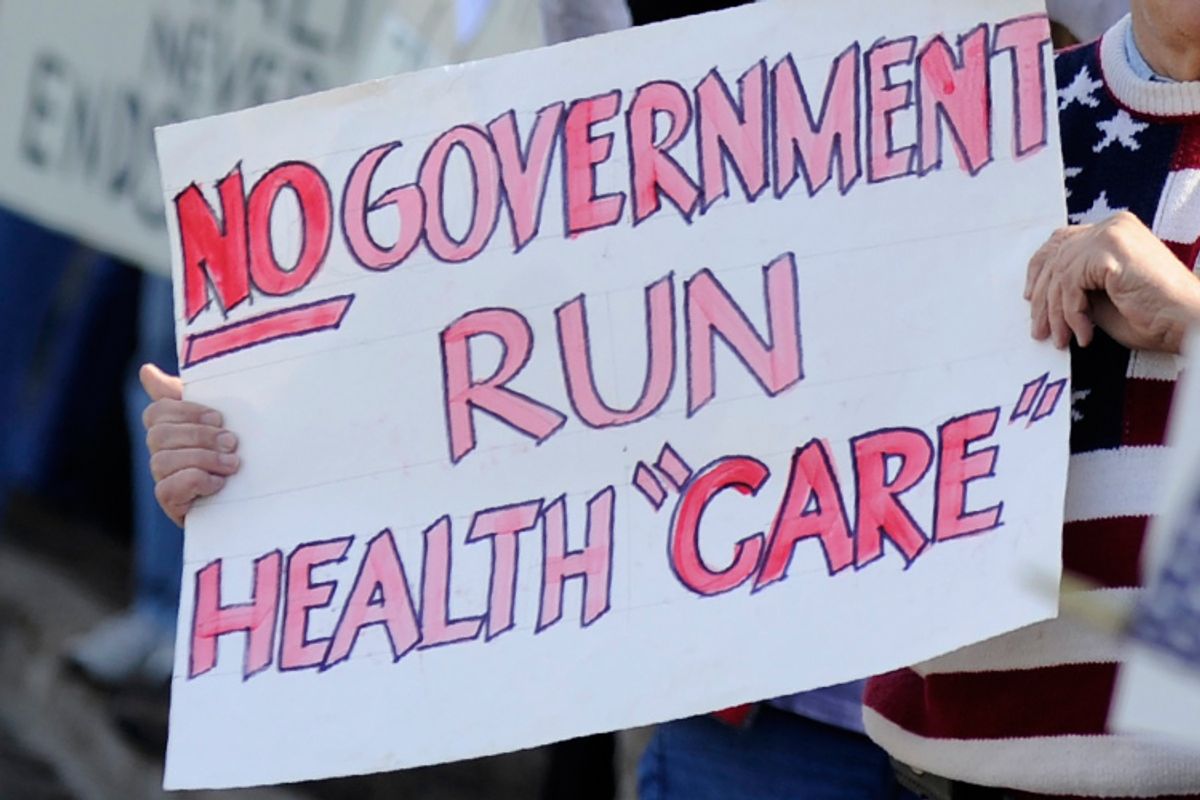 So a Virginia District Court judge appointed by George W. Bush and part-owner of a Republican consulting company that worked to oppose health care reform has ruled that a key section of the Affordable Care Act is unconstitutional. This is neither a surprise to anyone who has been following the GOP's legal assault against reform nor is it anything close to a deathblow.

Judge Henry Hudson specifically ruled that the "individual mandate" requiring Americans to buy insurance or pay a fine "exceeds the constitutional boundaries of congressional power." But he did not grant a stay halting implementation of the law, and he did not, as some crusaders against reform had hoped, throw out the entire law altogether. There is no questioning that the "individual mandate" is a critical piece of the package -- without it, it would be much more difficult to keep costs down overall. You need as many healthy Americans as possible buying insurance in order to make the economics work for significantly expanded coverage. But two other district court judges (both Clinton appointees) have already upheld the law against similar challenges, and the end game, as everyone has known from the beginning, will be the Supreme Court.

That finale is still possibly years away and in the meantime, the infrastructure construction of health care reform will continue. But the partisan tinge to the decisions so far, combined with the conservative tilt of the Supreme Court, do raise an obvious question. Is a rejection by the Supremes already a fait accompli? Maybe, but the fact that only one part of the law has been ruled unconstitutional so far actually lowers the probability that the ACA will be junked entirely. Ezra Klein, who already has three posts today analyzing the news from multiple angles, believes that Hudson's refusal to go all in should be encouraging news to health reformers.

The real danger to health-care reform is not that the individual mandate will be struck down by the courts. That'd be a problem, but there are a variety of ways to restructure the individual mandate such that it doesn't penalize anyone for deciding not to do something (which is the core of the conservative's legal argument against the provision).... The danger is that, in striking down the individual mandate, the court would also strike down the rest of the bill. In fact, that's exactly what the plaintiff has asked Hudson to do... Hudson pointedly refused.

The tragic irony built into Republicans cheering the kind of judicial activism that they usually deplore, while waging war against the mandate -- a scheme dreamed up by Republicans in the first place as a stratagem for protecting the private health insurance sector against an expanding public government role in health care provision -- became tiresome and hardly worth calling attention to long ago. But Klein sees a silver lining. If Republicans manage to knock out the part of the Affordable Care Act that actually makes the numbers add up, what solution will they find to the long run problem of ever-rising health care costs?

But if Republicans get it ruled unconstitutional in America, they'd be wise to ask themselves what other options they have: After all, the constitutionality of Medicare is not in question, and that's really the other model we could eventually trend toward.

Conservatives, either from confusion, or for the sheer fun of taking a political bite out of Democrats, are fighting the one measure that's essential if private insurance is to retain its central role in American health care ... [But] be careful what you wish for. By fighting the mandate needed to make private insurance solutions work, and doing nothing to ease the health cost burden on everyday Americans, you'll hasten the day when the public throws up its hands and says, "Just give us single-payer and price controls." Don't think the anti-government wave this fall won't reverse itself on health care if the most private sector-oriented health care system on earth keeps delivering the world's costliest, most inefficient care.