"The Master Switch": Is the Internet due for a takeover? 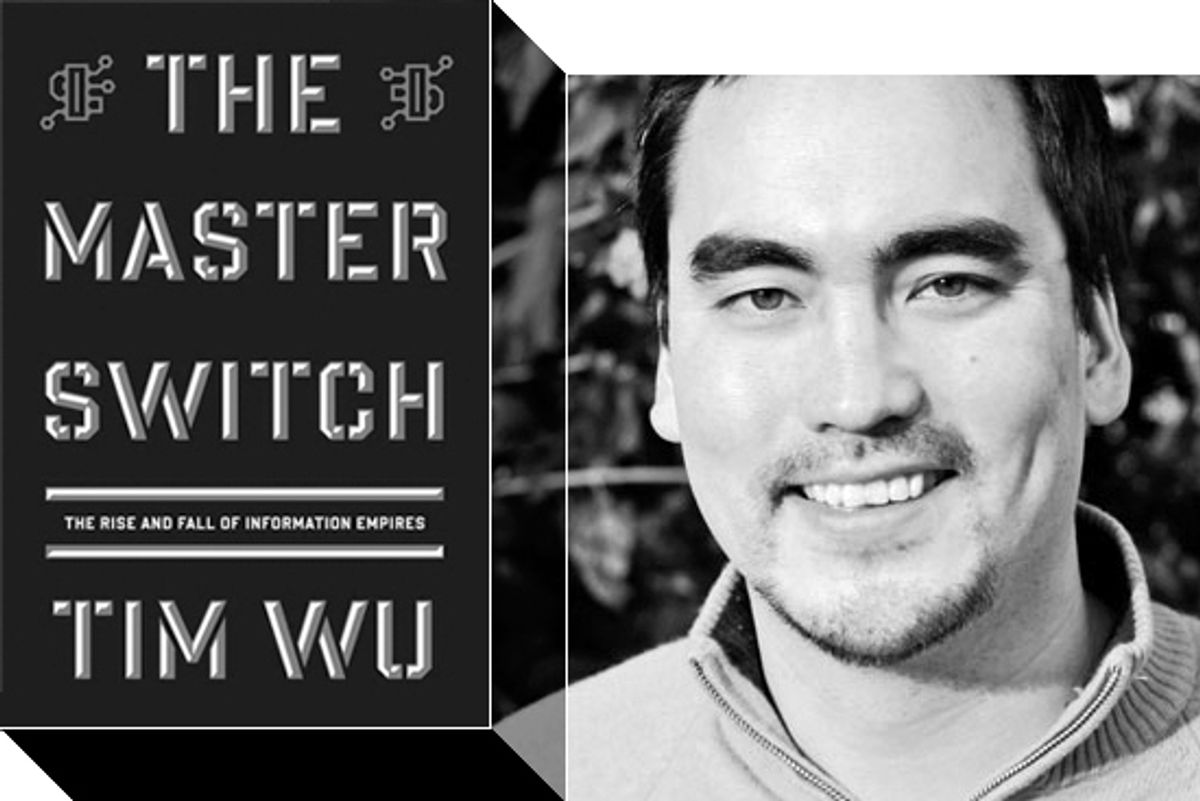 Tim Wu's "The Master Switch: The Rise and Fall of Information Empires" has been out for a few weeks now and has already become one of those books that prognosticators and opinionators feel obliged to respond to. It's also a substantial and well-written account of the five major communications industries that have shaped the world as we know it: telephony, radio, movies, television and the Internet. Wu believes that all of these industries have moved through cycles of diversity and consolidation, and that if we think the Internet is immune to a takeover by some massive monopoly promising a more perfect (and more profitable) experience for users (and itself), then we should look to history, and think again.

For Internet pundits (whether amateur or professional), Wu's book is required reading, but the average citizen may find it even more revelatory and rewarding. Maybe you know a little bit about the rise and fall of the studio system in Hollywood, or you get misty-eyed over the crazy but creative early years of radio, before major broadcasting networks took over. Anyone past the age of 30 probably has at least a hazy memory of Ma Bell being smashed into Baby Bells by the Department of Justice in 1984, and may even be aware that some people still regard this as a crying shame. And, of course, you all know that the Internet is radically, uncontrollably decentralized by virtue of its very structure: It was designed to survive a nuclear war, right?

In "The Master Switch," Wu assembles all of these stories and reframes them as battles in a shifting landscape of high-stakes industrial warfare, from Ma Bell's dastardly campaigns against small independent phone companies to the conquest of every aspect of the movie industry -- from talent and production to distribution and theaters -- by the ruthless moguls of the studios' heyday. He scrutinizes the postwar years when AT&T was treated like a shadow agency of the federal government, and recounts how the Machiavellian head of RCA, David Sarnoff, double-crossed an idealistic old friend to suppress the introduction of FM radio (a technology whose capabilities have yet to be fully explored) for decades.

These industries -- "the defining business ventures of our time," according to Wu -- "have from their inception been subject to the same cycle of rise and fall, imperial consolidation and dispersion." Furthermore, "the time has come when we must pay attention" because we are now, with the Internet, "on the high end of a pendulum arc that, so far, has always begun to swing in the opposite direction -- toward greater control and centralization." And while Wu strives for balance, acknowledging that monopolies can provide seamless service, efficiency, high-quality content and sometimes even lower prices, his heart is clearly with the wild and woolly (if also sometimes scruffy) nature of the wide-open model that currently abides online.

The histories Wu relates are unexpectedly fascinating, partly because fierce conflicts make for good stories and partly because they invite us to imagine such scenarios as what the world might have looked like if Bell hadn't postponed the introduction of innovations like voice mail, fax machines and modems for so long. Mammoth communications monopolies might be stable, Wu points out, and they do encourage the development of new ideas that stand a chance of enhancing their current business, as in corporate-sponsored hotbeds like Bell Labs. But they also reflexively shut down anything that threatens to usher in the "creative destruction" of true innovation. A form of irrational "paranoia" (Wu's term) caused Bell to stifle the invention of magnetic recording tape by one of its engineers in the 1930s -- somehow they thought it would "lead the public to abandon the telephone."

The Internet is, of course, supposed to be different, with its ability to transmit all kinds of data without routing it through a central switchboard (the "Master Switch" of Wu's title). But Wu sees potential peril coming from a few quarters. Google -- which has become, effectively, the master switch through which many people negotiate with the Internet -- could defy its famous motto and go evil should it ever decide its survival requires "integration and the elimination of whatever competition it has." Apple, with the iPhone and iPad, devices that can run only Apple-approved apps, could use the seductive ease and aesthetics of such gadgets to maneuver itself into the role of content czar. And, above all, whoever owns the physical infrastructure through which we all connect to the Internet -- in most cases, the cable companies -- could decide to parlay that into control over what we see once we're connected.

Wu, a prominent champion of net neutrality, proposes what he calls "a Separation Principle for the information economy." He wants to see "those who develop information, those who own the network infrastructure on which it travels, and those who control the tools or venues of access ... kept apart from one another." He also wants the government to "keep its distance and not intervene in the market to favor any technology, network monopoly, or integration of the major functions of an information industry." This portion of the book, because it's theoretical and hypothetical, is considerably drier than the historical chapters, but since Wu sees the public and its notions of "information morality" as a key enforcer for his Separation Principle, most readers will be prepared to listen up.

Wu's proposal is eminently reasonable -- relying neither on the unfettered free market nor state management to fend off monopolistic schemes, but a flexible situation in which public authorities step in when needed to maintain the genuine competition that fosters innovation. Naturally, fundamentalists on either side will find much to criticize, and the book does contain a few errors. (He thinks Slate was "the first online magazine" -- tsk tsk.) By necessity, Wu can't provide in-depth histories of the ups and downs and ins and outs of all five of these complex communications industries. It's precisely the economy and common sense of "The Master Switch" that makes it valuable to the non-wonk wondering how we got where we are today, and where we might be headed next.