When Sarah takes the fellow reality TV mom and her brood on a camping trip, things go awry 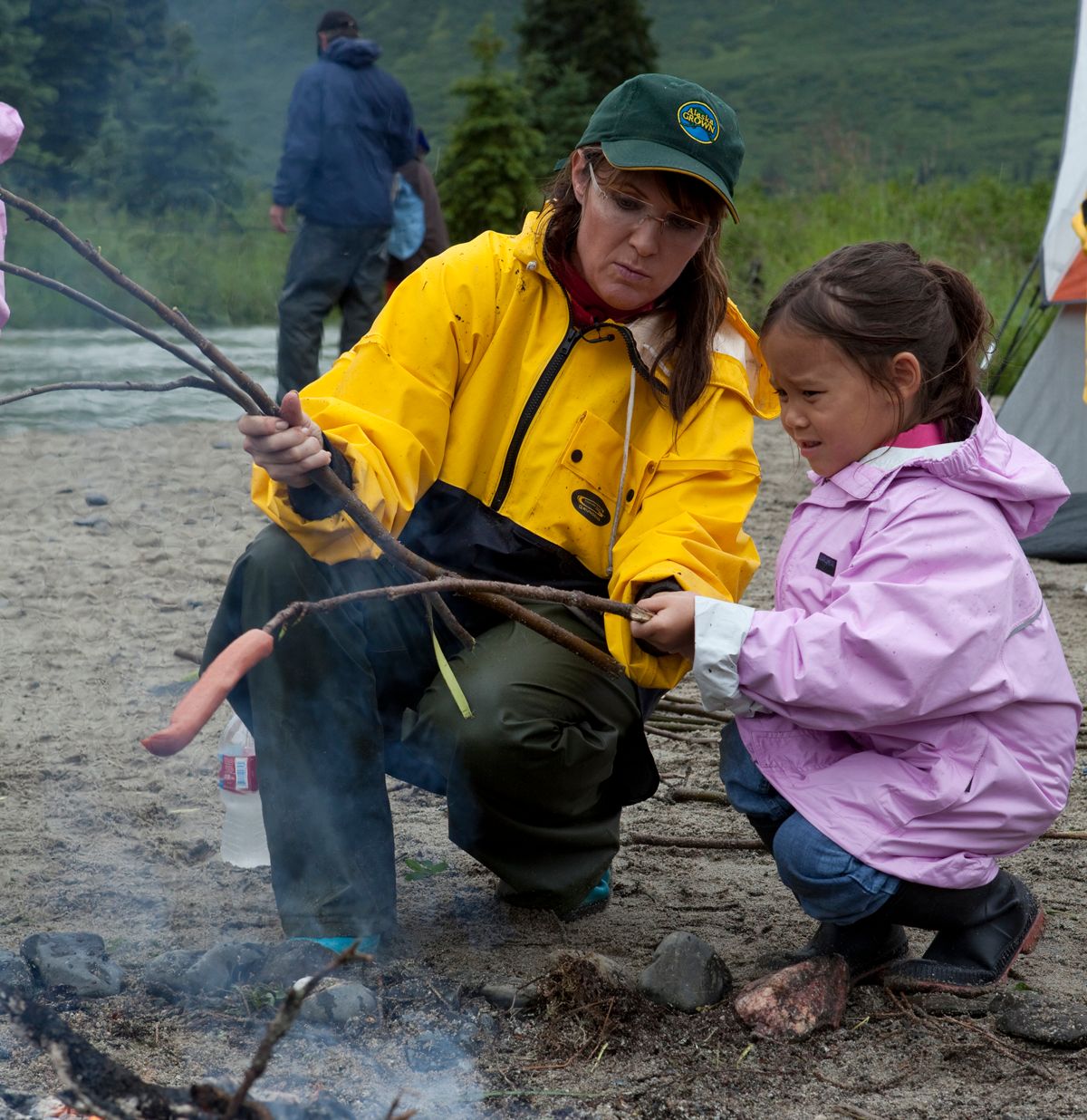 COFFEE CREEK, ALASKA, JUY 25 2010: Under a steady, pouring rain, Sarah Palin helps Gosselin kids make a smore at the remote camping spot where the Gosselins were supposed to camp with the Palins, but cancelled and left for a lodge because of the rain (photo Gilles Mingasson/Getty Images) (Gilles Mingasson/getty Images)
--

Sarah Palin succeeded in doing the impossible this week -- engendering sympathy and perhaps even a little bit of admiration when she faced her biggest wildlife challenge to date -- Kate Gosselin. For those unfamiliar with this pestilence, Kate Gosselin is the mother of eight young children, a former "Dancing with the Stars" contestant and the star of her own very popular TLC reality show. And she's insufferable.

At first, things seemed to go well between the two women. "Kate and I have a lot in common -- like we put our children first," says Sarah -- right before they attend a course on how to survive a bear mauling. It seems that putting children first entails taking them all camping in a part of Alaska that has a higher than average occurrence of brown bear attacks. We've been dancing around the issue since the show began, but this week's episode was a full-on middle finger flip to gun control advocates everywhere. Our first stop was the gun store, because every Palin adventure must begin with the purchase of a new firearm.

"Out in this territory anything can happen, but it's nothing a shotgun can't handle," Sarah says, clearly giddy at the thought that she might have an opportunity to drop one of those attacking bears so that media outlets can replay the clip over and over again come Republican primary time.

We learn in bear survival class, taught by a guy who could accurately be described as a cross between a coked up Mr. Rogers and Ted Kaczynski, that there are three options when encountering a bear in the wild: Say "no, bear" gently before falling to the ground and placing your hands over the back of your neck (while the naughty beast attempts to eat you), scare it with a warning shot or, if that doesn't work, blow its brains out. But Sarah has a fourth option: "You need a partner who's slower than you to survive a bear attack," she tells Kate.

From there they travel to the firing range where cardboard bears have been set up to charge at our outback heroine as we watch scene after scene of her putting endless holes into its "kill zone." Meanwhile, Kate stands off to the side wearing one of two expressions -- the look one gets when one smells dog crap or the discomfort brought on by gas -- which she exhibits for the entire episode.

The next day, Sarah and her family travel ahead to prepare the campsite -- which is once again in a part of Alaska that can only be accessed by float planes (apparently the Alaskans who spend the spring hunting for food to survive the long winter receive some kind of government subsidy to charter private planes). Before the trip has even begun, Kate complains about the light drizzle that's falling as her dour-looking brood wander behind her, perhaps knowing their mother well enough to know what's coming next. When she arrives at the campsite, she walks immediately to a covered area where she remains for the entire trip -- speaking to the TLC cameras or anybody who has the misfortune of walking nearby. Here are a few of the quotes, delivered as she becomes more and more agitated by her surroundings:

"I can honestly say I have never camped for real."

"Are you kidding me? Doesn't a lodge sound more exciting to you?"

"We never did spray the kids with bug spray, which is a very big problem."

"[People] did this before there were houses, why would [they] do it now?"

"I've been bitten about 200 times already. I know the kids are having fun, and that's the only reason I'm tolerating it."

"This is cruel and unusual punishment."

"It just kills me that people do this. It is just so shocking to me."

And my personal favorite:

"I'm sorry I'm miserable, but somebody has to be."

Meanwhile, her kids and the Palins gather firewood, cook hamburgers and hot dogs, fish by the river, collect rocks and keepsakes, make s'mores, laugh, find cool fish bones and generally have a ball.

"We are not camping people, I'll scream it from mountaintops," she says as her discomfort reaches the breaking point. "This is just ridiculous. There are no paper towels. How do you make sandwiches for eight kids on your ARM?! I don't see a TABLE; I don't see UTENSILS; I don't see HAND CLEANSING material. These are not ideal conditions. I am freezing to the bone. I have 19 layers on. I have held it together as best I could and I am DONE now. I'M HUNGRY!" she yells finally, slamming her fist on the table and dropping, defeated, into a chair as her voice breaks.

Meanwhile, Sarah is becoming perkier the more Kate comes unglued. It has grown increasingly apparent as the show has progressed that her appreciation for Alaska is based partly on how miserable it makes non-Alaskans. And this non-Alaskan has had enough.

"Are you ready to go, or do you want to stay," Kate asks each of her kids, to which each of them reply that they'd rather stay.

"OK, goodbye. You're now a Palin; you're not a Gosselin," she says. When the kids don't register any protest to this, she forces them to leave anyway.

"Well, I thought we were going to go camping with the Gosselins," Sarah says as they disappear down the path, "We didn't.  We had lunch with them on a sandbar."

She should consider herself fortunate it ended so soon.