What's Michele Bachmann up to? 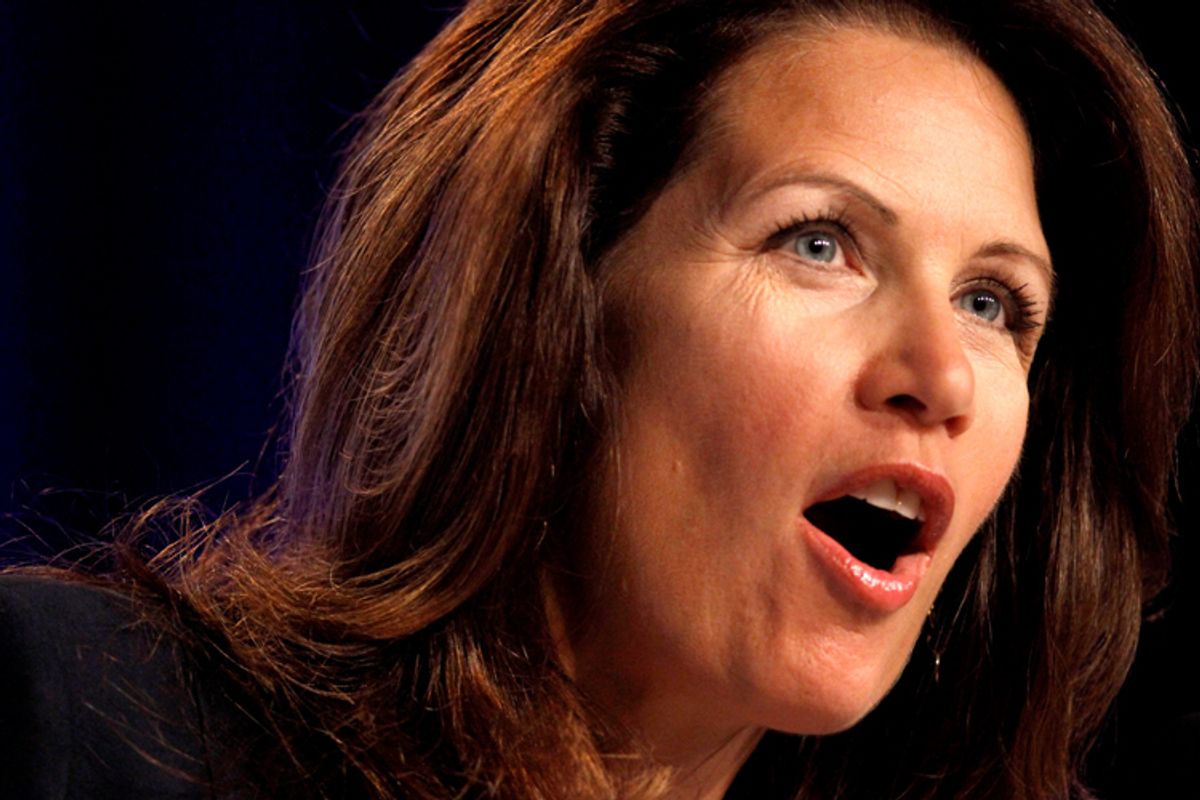 The only people Bachmann could think of to teach these lessons were the conservative members of the Supreme Court and her favorite completely insane evangelical crank pseudohistorian. And Antonin Scalia actually said yes, according to this stilted, fake-seeming YouTube clip of Bachmann chatting with giant yellow right-wing populist and failed space-entrepreneur Lou Dobbs, courtesy of RightWingWatch:

Bachmann: We're going to do what the NFL does and what the baseball teams do: we're going to practice every week, if you will, our craft, which is studying and learning the Declaration, the Constitution, and the Bill of Rights.

Right. Yes. So ... Bachmann will have lawmakers "practice," like football players. And I guess she thinks football players spend practice memorizing the rule book? Shouldn't Bachmann have her "players" spend that time drafting bills and whipping votes? (Or maybe Bachmann truly doesn't understand that Congress members are supposed to do all that boring junk. She herself is so busy loving the Constitution that she can't make time to actually participate in the legislative process.)

Anyway, yes, the first "teacher" is Justice Scalia, from the Supreme Court, because sometimes NFL teams have their practices run by professional basketball players, for fun.

In other "Michele Bachmann as human embodiment of all that you have to fear from a Republican House majority" news, Bachmann and the House leadership are taking a close look at Nancy Pelosi's "Green the Capitol" initiative, which replaced all the light bulbs and so on, for the polar bears.

The Republicans, according to the Washington Post, were all set to end this "Green the Capitol" thing, because caring about the environment -- like "nutrition" -- has become a deeply divisive partisan issue, but then they all sort of noticed that ending it would be a decidedly non-symbolic waste of money and time, and also greening the Capitol was kind of worth it. Pelosi's hippie nonsense "reduced energy consumption in House office buildings by more than 20 percent, reduced water use by more than 30 percent and saved or recycled more than 2,000 tons of paper," according to a recent House report.

Republican aides and lawmakers said they planned to weigh each element of the initiative.

"Some of the measures may have saved some money," said Rep. Michele Bachmann (R-Minn.), the leader of the conservative Tea Party Caucus. "We have to look at it on a cost-effectiveness basis."

In other words, Republicans realized that even if global warming is a secular Kenyan myth, making the Capitol more energy efficient was more or less worth the initial expense. So while they will all laugh at hippie Nancy Pelosi, they will probably not note that her San Francisco values saved taxpayers a bit of money. Besides not making another purchase of carbon offsets -- which really isn't so awful, because carbon offsets are basically a scam -- just about the only element of the Capitol-Greening plan that the GOP will definitely kill is the biodegradable cutlery.

Until, of course, Bachmann discovers that the Constitution doesn't even mention compact-fluorescent lights, at which point she will have them all removed and replaced with copper lanterns and elaborate candelabras.