All I want for Christmas is nothing

As my mom faces final-stage lung cancer, the only gift I want is to hold on to what I already have 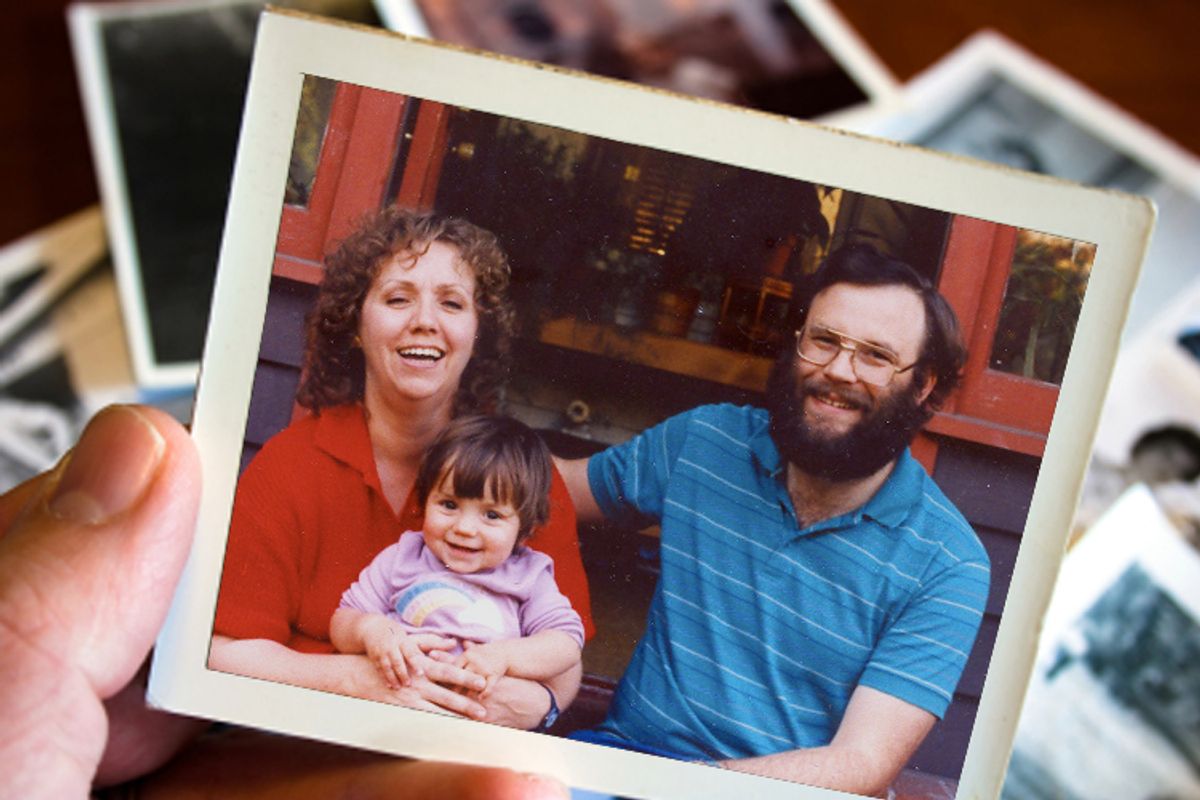 The author as a child, with her family
--

The other day, my dad -- a jolly 61-year-old with a white-flecked beard -- tried to explain why he hates Christmas. "It's everything that comes with it," he scoffed. "I'm supposed to believe that love is a car in the driveway with a big bow on top?" He's always been disgusted by holiday ads that equate diamonds and other luxury goods with love -- but these commercials are especially insulting this year, because his wife, my mom, has final-stage lung cancer.

When your partner is dying, the idea of a shiny new Lexus as a symbol of commitment -- to anything other than monthly payments -- becomes particularly odious; "diamonds are forever" takes on depressing new meaning (because life isn't forever). No, love isn't "a car in the driveway with a big bow on top." It's pushing a wheelchair. It's cutting off all of your lover's hair as it begins to fall out in large clumps during chemo, and massaging that patchy head to give her one of the few physical pleasures left to her. It's laughing while browsing a wig shop where the only other customer is a transvestite prostitute. It's relearning how to cook after three decades of marriage. It's giving shots through a layer of belly fat. It's sitting side-by-side in a hospital bed watching TV.

Of course, it isn't any revelation that advertisers seize on and exploit our deepest desires. It's just that cancer has a way of magnifying the absurdity of selling love. Much as my world is profoundly distorted by anticipatory grief right now, I don't actually believe those above images of love enduring through illness would make for successful advertising; I realize most people prefer to fantasize about having a diamond slipped on their finger rather than having a hand to hold during chemo. But -- reporting live from this place of personal crisis -- I truly cannot imagine anything more beautiful or romantic than the love that passes between them these days.

Last weekend, my mom, still flabbergasted, whispered to me that my dad had offered to put up the Christmas decorations. The most enthusiasm he's ever displayed for the holidays is when he's blown up the tree the day after Christmas. (He's a mad scientist by profession and likes making things go "boom.") That is to say: The only enthusiasm he's shown over Christmas is for destroying all signs of it. But this year my mom is too delicate to put up decorations -- the cancer has spread from her lungs and begun to eat away at her bones. She can't hike up and down the basement steps lugging boxes full of miniature Dickensian cottages, cobbled streets and fake snow.

So, he's volunteered to decorate. It is absurd, the idea of him trying to set up the detailed village -- with all its ice skaters, carolers and horse-drawn carriages; the image of him hanging ornaments from the tree is one of equally entertaining dissonance. This is what strong families do in crisis: They adapt and roles change. Just as my my father has suddenly, and enthusiastically, retired his Grinchly ways, I have found myself returning but a vanishing fraction of my mom's many years of caretaking. I've gotten a great deal of satisfaction from calmly talking her through a morphine-induced hallucination, helping her to the bathroom and reminding her while she apologizes for throwing up in front of me that I've thrown up on her (to which she replied, "But not in a very long time, honey"). I suppose that's one definition of love: You do something for someone else and it ends up feeling like a gift to yourself.

My mom gets serious personal satisfaction from gift giving and, as an only child, I've reaped most of the benefits. My adult wardrobe largely consists of clothing she's bought me over the years. It is obscenely lucky -- but it's nothing compared to the experience of watching her grace and strength in the wake of her diagnosis. That's the funny thing about Christmas: You spend your childhood wanting things, wanting more stuff. Now, of course, I'd trade it all just to keep what I already had.

I recently caught myself wondering darkly, "What kind of Christmas present do you get for someone who's dying?" Gifts are so obviously irrelevant this year -- but, really, they're irrelevant every year. My mom -- the one who is dying, the one whose mutated cells are waging war on her own body -- never got a diamond ring or a luxury car in her 32-year marriage, and yet these days she cries and says things like, "I just feel so lucky to have had my two loves."