Is this Lieberman's plan to win back Democrats?

Joe Lieberman is pushing hard for repeal of "don't ask, don't tell." Guess who's up for reelection in 2012 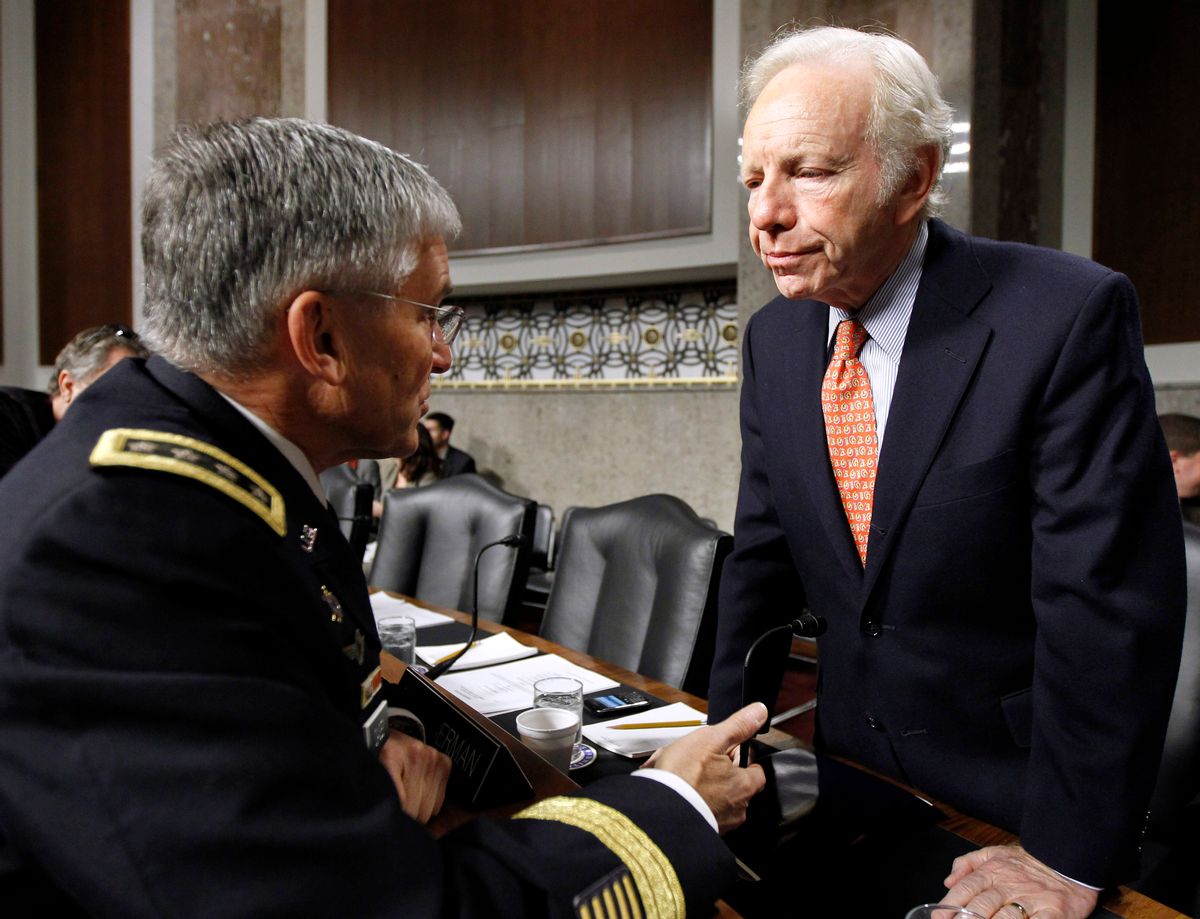 When last we checked in on him, Joe Lieberman was facing an essentially hopeless predicament as his 2012 reelection year approached: Winning the Democratic nomination would be out of the question (too many burned bridges), running as a Republican would be a dead end (unlike in 2006, the party will field a real candidate in '12), and another independent bid would be futile (Lieberman is broadly unpopular with Connecticut voters). The most logical scenario had him eventually realizing all of this and, at 70 years old, opting to hang it up in '12.

With this in mind, it's worth asking: Are his fierce efforts to win repeal of "don't ask, don't tell" designed to alter this bleak reality?

If DADT repeal does end up clearing Congress in the lame duck session -- something that all of a sudden is possible again -- the biggest single reason why may be Lieberman's advocacy. After all, when the GOP's filibuster of the Defense appropriations bill that contained repeal language was upheld last Thursday, Lieberman immediately stepped forward to announce that he and Susan Collins, the only Republican to vote to end the filibuster, would immediately file a stand-alone repeal bill -- one they said could still be passed before the end of the lame duck session. That prompted the House, where repeal advocates will enjoy a strong majority until new members are sworn in in January, to move toward passing an identical stand-alone bill of its own. If the House now passes that bill, DADT will be one Senate vote away from repeal.

It's true that Lieberman has long advocated doing away with DADT, but it's notable how persistent and forceful he has been since the November election -- so much so that Jon Stewart, who has been deriding him for years, actually broke into applause recently after playing a clip of Lieberman speaking out against DADT. Moreover, Lieberman's closest friend in the Senate, John McCain, has established himself as the leading voice against repeal, making it more remarkable that Lieberman has chosen this issue to wage such a vigorous fight. Since returning to the Senate as an "independent Democrat" after the 2006 elections, he's delighted in torturing Democrats on major issues, even when he's voted with them in the end. (Remember healthcare?) But on DADT, Lieberman has unapologetically and uncompromisingly aligned himself with many of the same liberal voices who worked against him in 2006.

Again, it's possible he really is acting purely out of principle. But it's hard to ignore the possibility that a political calculation is at work here: using a high-profile issue that matters deeply to the Democratic Party base to reestablish some goodwill with 2012 primary voters. And it's especially hard to ignore this possibility in light of a new report from Politico that Senate Majority Leader Harry Reid is "quietly urging" Lieberman to run as a Democrat in 2012.

Of course, if this is the game that Lieberman is playing, it's hard to believe that his DADT push -- even if it does result in repeal this month (and vociferous praise from liberals who have been bashing him for years) -- will do much to improve Lieberman's chances of snagging the Democratic nod in '12. In many ways, the Connecticut Democratic Party has already moved on without him. There are other ambitious, credible Democrats (Rep. Chris Murphy comes to mind) who are eyeing the race, and memories of Lieberman's apostasies will live on with primary voters. Nor would Reid's blessing necessarily help -- just ask Arlen Specter.

Another possible interpretation of Lieberman's DADT posture is that he's looking beyond the Democratic primary electorate, aware that repeal polls well across the board -- especially in a culturally liberal state like Connecticut. He may see taking the lead on this issue and delivering results as one of the top selling points of an independent reelection campaign.

The smart money still says that Lieberman has no realistic path to victory in 2012. Resistance within the Democratic Party will be too strong, and there are real signs that general election voters are just tired of him. If nothing else, though, his DADT aggression suggests he's aware of this -- and that he's trying hard to change it.