What's to prevent the interstate highway system from turning into dirt tomorrow? 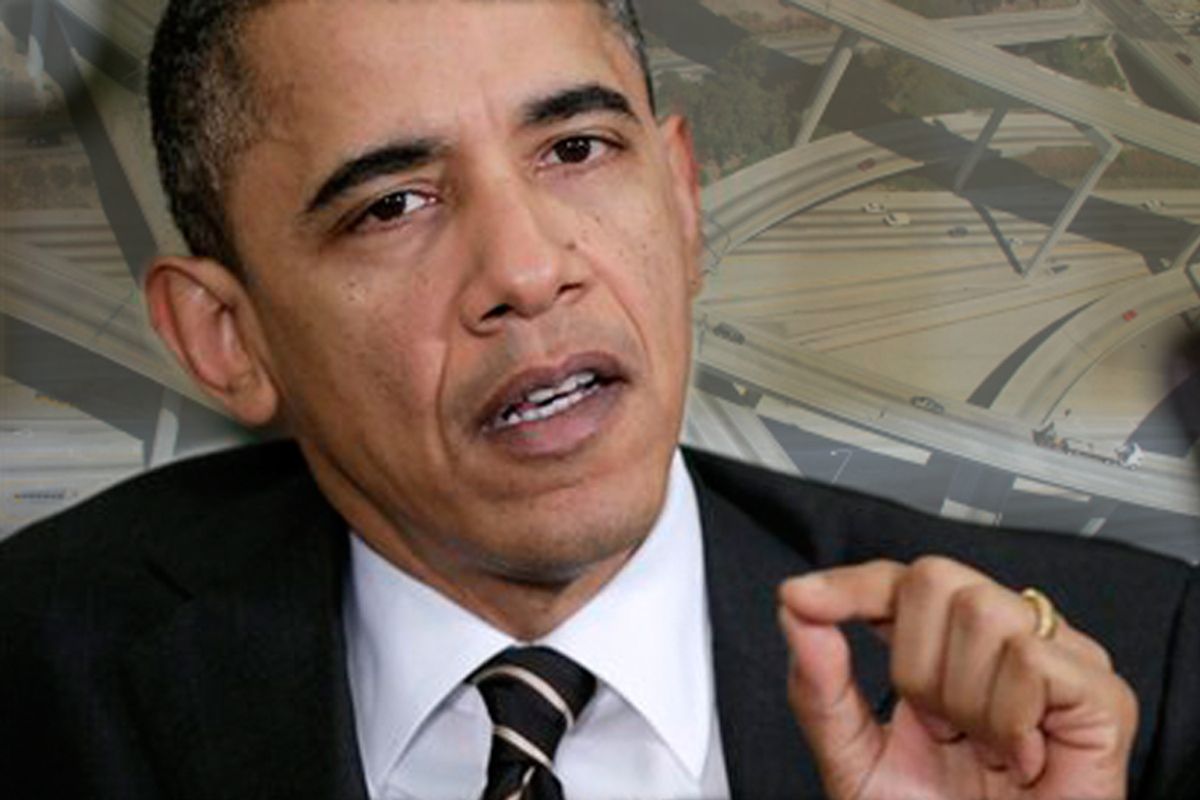 One of the little-noticed elements of the deal on taxes agreed upon by the Obama administration and the Republican congressional leadership is the decision of the White House and the GOP not to renew an obscure program known as Build America Bonds. This decision threatens to hurt American economic growth for decades to come, by eliminating one of the most successful methods of modernizing the vital infrastructure on which American businesses and workers depend.

Build America Bonds (BABs), a variety of municipal bonds that receive favorable tax treatment, were created in the American Recovery and Reinvestment Act of 2009. Unlike traditional tax-exempt municipal bonds, BABs are taxable and attractive to investors like pension funds that do not benefit from tax-exempt bonds. States, counties and cities issue the bonds for infrastructure projects, and the federal government pays 35 percent of the interest. The federal subsidy greatly reduces the borrowing costs for state and local governments.

Even before the recession, the American Society of Civil Engineers calculated that the U.S. needed to spend $2.2 trillion over five years not only for new freight and passenger infrastructure but also for maintenance and repair of crumbling bridges, highways, railroads, inland waterways and ports. Infrastructure spending, which would be necessary in any event, is all the more urgent during a near-depression like the Great Recession. Unlike short-term tax cuts intended to boost consumer spending, infrastructure investment can create permanent public assets and lower the costs of transportation and communications for American businesses, while mobilizing capital and labor that otherwise would remain idle.

One would think there would be a bipartisan consensus on the need to help American business by investing in infrastructure, even among conservatives and liberals who disagree on other elements of American public policy like Social Security and Medicare. A modern, efficient infrastructure is the "seed corn" of a modern, efficient economy. Because future prosperity depends on it, infrastructure investment should be the last to be sacrificed. And the Build America Bonds program is the most successful infrastructure program in years, mobilizing $170 billion in new investment since the program's inception.

And yet, according to Reuters, the Republican Party is determined to kill an infrastructure investment program that in the past enjoyed bipartisan support:

Congressional Republicans will block any inclusion of Build America Bonds, a taxable bond program popular with states, cities and other muni issuers, in the tax deal they clinched with President Barack Obama, a Republican aide said on Tuesday.

"We have a very firm line on BABs -- we are not going to allow them to be included," a congressional Republican aide said.

What is going on? The answer is that the Great Recession has triggered a dormant virus of atavistic Jacksonian populism that has long infected the American body politic. In the 1830s, President Andrew Jackson, a rich slave-owner posing as a populist, destroyed the Second Bank of the United States, creating financial chaos in the U.S. that lasted until the Civil War. He also vetoed critical federal road subsidies, in the name of the states' rights ideology that he and other Southern slave-owners wielded to protect their "peculiar institution” against federal interference. Slavery and segregation are long gone, but the states' rights theories of the Southern slaveocracy live on to warp federal-state relations in areas like infrastructure modernization.

From Jackson's time to ours, parochial lawmakers have been willing to sacrifice federal support for national infrastructure investment because they fear other jurisdictions might get more than their own. This parochialism inspires opposition to the proposed national infrastructure bank, which might reduce the ability of members of Congress to assign highway money to their districts instead of where it is most needed. And parochialism explains part of the opposition to BABs and other federal infrastructure programs on the part of Iowa Sen. Charles Grassley, according to the New York Times:

Although more populous states that account for a greater share of the U.S. economy naturally receive more infrastructure funding, it is not the case that BABs are some kind of blue-state or blue-city boondoggle. As the Center on Law and Public Finance points out, conservative Republican Utah accounts for the greatest amount of BABs as a percentage of GDP of any state.

In rural areas of states including Ohio, South Dakota and Michigan, state or county governments have been so strapped for cash that they are converting asphalt roads to gravel or allowing them to crumble. That's right: While our Asian and European economic rivals are building new, smart infrastructure, the United States of America is allowing its existing roads to crumble into gravel and dirt as the Roman roads did during the Dark Ages.

This is perfectly acceptable to some Jacksonian populists, according to the Wall Street Journal:

"I’d rather my kids drive on a gravel road than stick them with a big tax bill," said Bob Baumann, as he sipped a bottle of Coors Light at the Sportsman's Bar Café and Gas in Spiritwood [Ohio].

I’d rather my kids drive on a gravel road than stick them with a big tax bill. That statement illustrates the Jacksonian mentality in its purest form.

If state and county roads go to gravel today, what is to prevent the interstate highway system from turning into dirt roads tomorrow? American businesses should be fighting to preserve a high-tech, continental infrastructure. But many multinational corporations that outsource production can tolerate the crumbling of American infrastructure, as long as their factories and suppliers in Asia are connected to seaports and airports by state-of-the art freight rail and roads, and as long as a minimum number of adequate rail and highway links can bring imports from American ports to exurban box stores. The management and financial functions that remain in a deindustrialized America can be located in Latin American-style gated communities or high-rise downtowns, separated from the poverty and chaos of the crumbling landscape between the plutocratic enclaves.

I’d rather my kids drive on a gravel road than stick them with a big tax bill. The gentleman in the Sportsman's Bar Café in Spiritwood, Ohio, unwittingly may have composed the epitaph for the American economy.