The law requires Ben Bernanke to pursue policies that maximize employment. Republicans aim to stop him 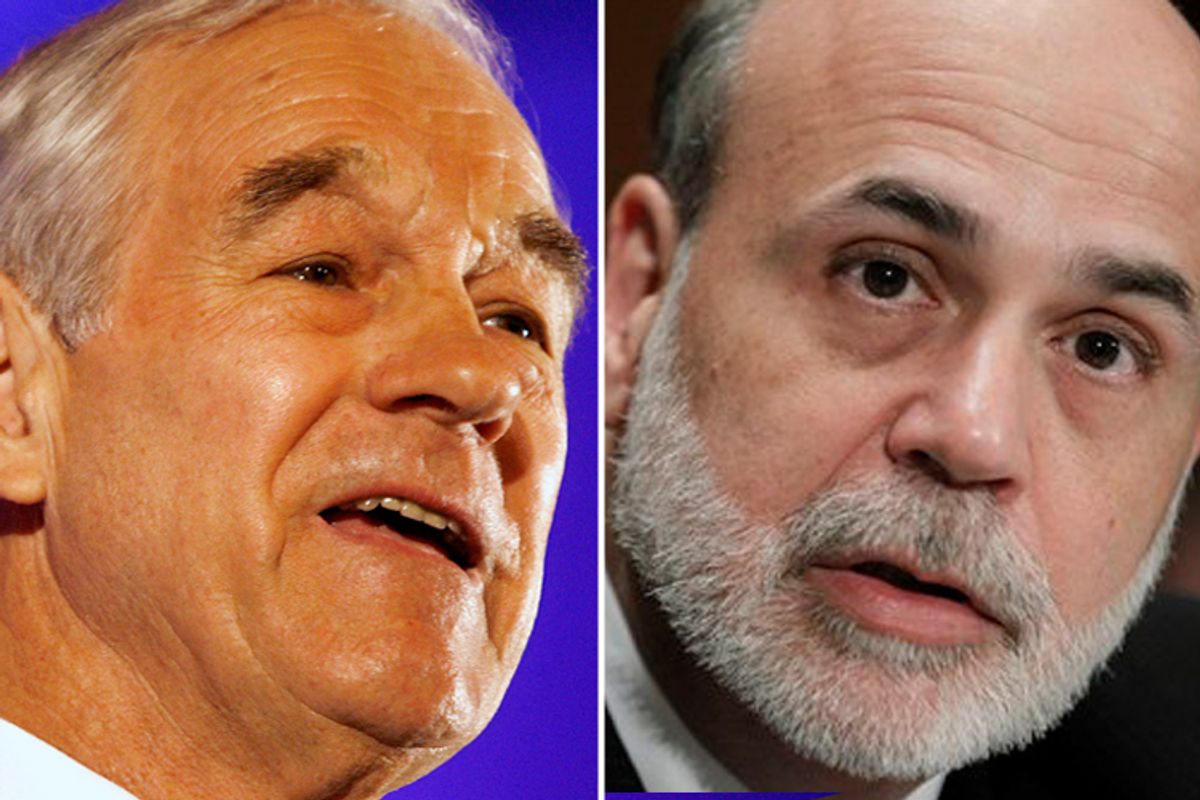 Once upon a time, liberals savaged Federal Reserve Chairman Ben Bernanke for not doing enough to combat unemployment. The Fed operates under a "dual mandate" to seek maximum employment and price stability (i.e., low inflation). But progressives have generally been suspicious of Bernanke's commitment to spur job creation.

How ancient those concerns seem now! Today, the primary assault aimed at the Fed is coming from Republicans, who believe that Bernanke is doing too much to combat unemployment. Some would like to simplify the Fed's responsibilities by putting an end to the dual mandate. Bloomberg:

Republican lawmakers have proposed stripping the Fed of its mandate to achieve maximum employment, so it would focus only on inflation ... [Ron] Paul expressed concern last week that the central bank won't be able to avert an acceleration of inflation. He also said he plans to "push for debating" whether the Fed should focus solely on policies that promote price stability.

Paul, in line to chair the House subcommittee on monetary policy, actually wants to go much further -- he'd like to abolish the Federal Reserve altogether. That's not going to happen, but it is nonetheless worth emphasizing how dedicated Republicans are to making sure government doesn't lend a hand to working men and women. Everyone knows the GOP wants to stop extending unemployment benefits. But the push to prevent the central bank from pursuing any stimulative policies takes that campaign to the next level.

Conservative Washington Post columnist George Will, as one might expect, set out the new agenda just before Thanksgiving. Congress only forced the dual mandate on the Fed in 1977, writes Will, and it's time to roll back that decision.

But in a letter written to the Post in response by Ken MacLean, the director of the Senate Banking Committee staff from 1975 to 1980, the roots of the Fed's responsibility to worry about unemployment are traced much further back.

Actually, the so-called dual mandate was not first enacted in 1977. Its origins can be found in the Full Employment Act of 1946, which committed the federal government to pursue the goals of "maximum employment, production and purchasing power." The Federal Reserve is clearly part of the federal government, and various Fed chairmen have acknowledged over the years that the goals of the 1946 act are applicable to the Federal Reserve.

Life will be simpler for liberals after the new Congress begins -- at least insofar as the House of Representatives is concerned. No longer will we be debating whether Democrats are pursuing a reform agenda that actually addresses the major problems the country is facing. Instead, we'll just gape as Republicans do their utmost to cripple government from doing anything worthwhile at all.