What does No Labels really want? 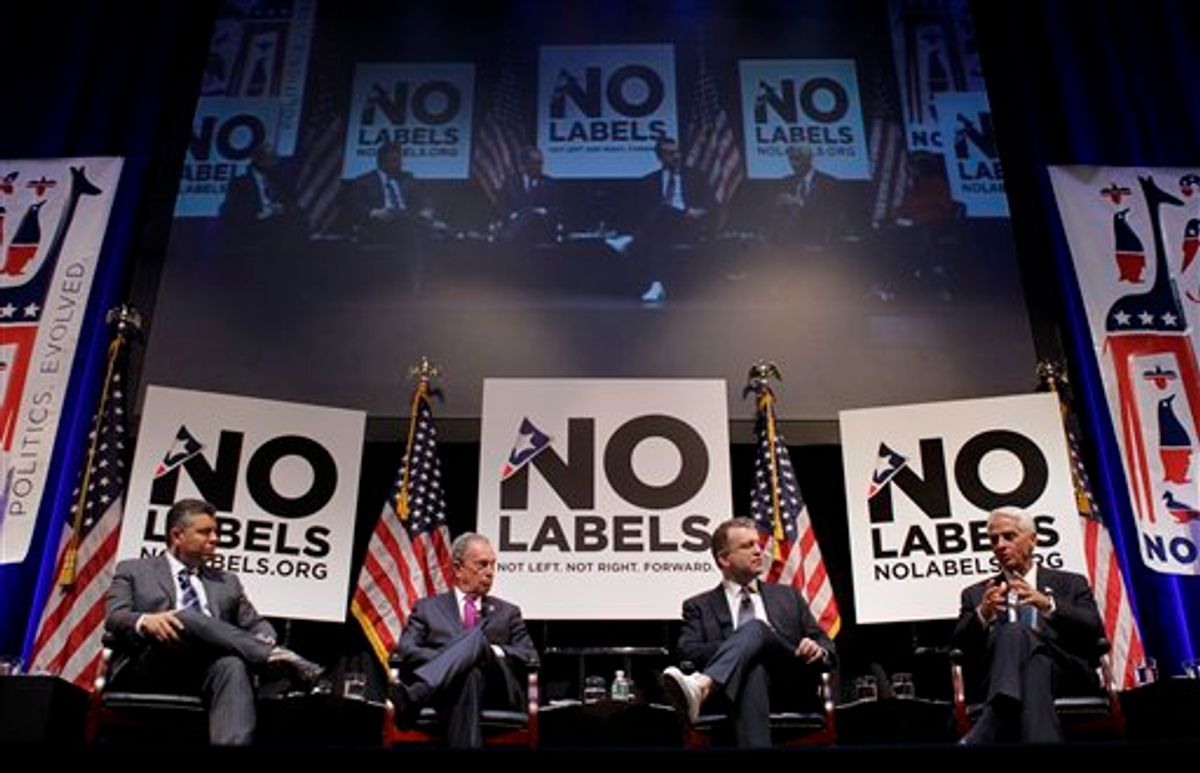 The new centrist, anti-partisan group No Labels launched on Monday with a high-profile New York event featuring Michael Bloomberg, MSNBC's Joe Scarborough, former Florida Gov. Charlie Crist and several other prominent members of the political class. The group has drawn immediate scorn across the ideological spectrum (including from Salon), primarily for what a National Review writer summarized as "no specifics, no coherence, no point."

But we thought it only fair to give No Labels -- which has some real money behind it -- a chance to explain what it's about and to answer criticisms of its vague-sounding mission to "strengthen the mainstream." On Tuesday afternoon, Salon spoke with No Labels co-founder John Avlon, a former speechwriter to Rudy Giuliani and author of "Wingnuts: How the Lunatic Fringe Is Hijacking America." (You may also remember a bit of unrelated history between Salon and Avlon.)

The below Q&A has been edited for length and clarity.

What is planned in terms of concrete actions that No Labels is going to take?

The agenda is evolving, but we will be doing town halls once a month across the country, primarily on college campuses.

We're going to be forming citizen-led groups in each state, focusing also on congressional districts, particularly those that are swaying or those where independents outnumber Democrats or Republicans. As we said yesterday, we're also going to be coming up with a No Labels metric as a way of gauging which congressional figures and senators are working to reach across the aisle in a principled way, in a substantive way -- and which are just playing the hyper-partisan game.

So at this point there's no position on any particular issue that No Labels is going to be advocating?

If you go onto our website, you can see commentaries that have been posted in support of the tax cut compromise, by [No Labels co-founders] Kiki McLean and Mark McKinnon. I have written in support of the deficit commission -- trying to get folks to recognize that the way to deal with the deficit is through a degree of bipartisan compromise, that we're going to need revenue increases, spending cuts and entitlement reform.

During [former Bush official and No Labels co-founder] David Walker's speech Monday, he said he was opposed to the tax compromise and asked, "What planet are these people on?" That's an entirely different position than the one that McKinnon and McLean wrote about -- so how do you square that? Those are two totally opposed positions on a basic issue.

Again, we don't have talking points. We don't have prescribed policy positions. And we want to encourage vigorous debate. We believe we can disagree agreeably, we believe that there are good people and good ideas in both parties, and that neither party has a monopoly on virtue or vice. If David Walker is taking the long view about deficit reduction and that's in contrast to what Kiki and Mark were articulating about the short-term progress of forging some degree of compromise out of this Congress, I don't think that's ideologically inconsistent. It's not a break from any party line because we don't have a party line. We're not trying to impose talking points on people.

Is the idea that at some point in the future No Labels will have a set of policy positions that you're advocating, or is it going to be more a process-oriented group that encourages civil debate?

I think it's entirely possible that we will evolve in the direction of supporting specific policies and specific pieces of legislation, but we're going to deal with those as they come up.

It's important to appreciate that we are not trying to form the Kumbaya Caucus here. We understand that there's a need to provide muscle. And that's the reason we're trying to aggregate these folks. For all the efforts that have been made in the past, if this was easy, it would have been done before. But social media, we think, creates a real opportunity to aggregate folks who are inherently not joiners -- people who are patriots but who are not necessarily partisans.

Your website says that No Labels is going to be "a voice for people who want a less partisan, less ideological, more common sense approach to the nation’s problems and crises." How does No Labels go about determining which approach is a "common-sense approach"?

It's a great question. There's a great Fiorello LaGuardia quote, "There is no Democratic or Republican way of cleaning the streets." That's always a good touchstone for me. The point is, we approach our political debates too often with positional bargaining or with abstract ideological imprints that have very little to do with actual facts on the ground. Eighty percent of mayors in this country are elected in nonpartisan elections, and a lot of them showed up yesterday -- [Newark Mayor] Cory Booker being the best example, in addition to [Los Angeles Mayor] Antonio Villaraigosa. When you talk to mayors, they look at the way our political debates are conducted on television and frequently in Congress where people scream talking points past each other -- and they think it's absurd and irrelevant because it has nothing to do with the actual job of solving problems.

We've somehow missed the Founding Fathers' warning about inflaming factions. We want a good, vigorous debate, but a functioning democracy depends on checks and balances. It depends on restraining factions and focusing on the common ground that exists to avoid tyranny of the minority or tyranny of the majority.

Pivoting off the LaGuardia quote, let me ask you about another issue that came up at the launch event Monday. Joe Scarborough said that most Americans want to see an end to the war in Afghanistan and that that's where he is on the issue. It's fair to say that others, like [No Labels co-founder and former Bush speechwriter] David Frum, would be horrified by that idea. Isn't that a case of just fundamentally different goals -- on the one hand bringing the troops home, on the other hand stay in Afghanistan for longer and send more troops. What's the No Labels perspective on an issue like that?

I don't know that the No Labels community is going to end up weighing in on foreign policy. We believe part of the problem is this ideological litmus test. We want to have a vigorous, thoughtful debate. We can disagree without demonizing people who disagree with us. Part of the problem in our politics is that we're starting to consider political opponents personal enemies.

I appreciate that Scarborough's position on Afghanistan would be very different than David Frum's. And yet, I think if David and Joe sat down and talked, they'd probably agree on 70 or 80 percent of issues that face the nation. And I think that's the point. It's not the focus on the issues that divide us.

Another definitional question: The website talks about the goal of strengthening the "mainstream." How does one go about defining the mainstream?

Take a look at any political position out there, even the most supposedly polarized like the culture war issues. You'll find that the activists on the far left and the far right are deeply, sincerely divided on issues like abortion and gay rights. Now, No Labels hasn't gotten into social issues. But what I do know is that consistently, over 60-70 percent of Americans broadly believe the same things. "Safe, legal and rare" on abortion, for example. You look at the "don't ask, don't tell" debate and you see similar numbers.

It's a larger issue that frequently we're presented with a harsh and I believe largely artificial view of a country that is deeply divided, when I think the truth is that Americans are largely narrowly divided. When the screamers and the activists dominate the debate, they offer these harshly diametrically opposed, unbridgeable chasm policy choices that don't reflect the full spectrum of choices that exist or the actual way that Americans think.