MTV's Amber Portwood has become a favorite tabloid target, thanks to assault charges and a rumored second pregnancy 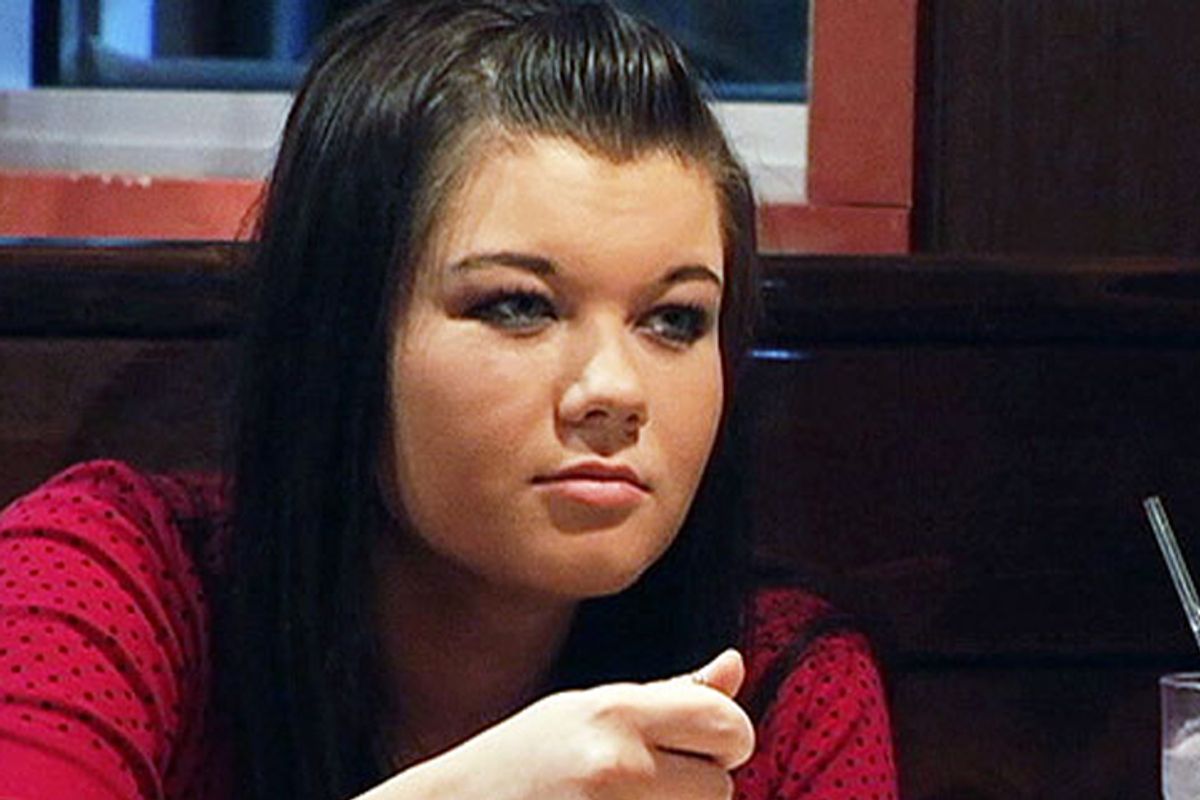 Britney Spears has been dethroned, ya'll. It seems the tabloids have handed the "bad mom" crown over to Amber Portwood of MTV's "Teen Mom." There's the 20-year-old on the cover of this week's In Touch alongside the all-caps headline, "She's pregnant!" Yes, she is rumored to be carrying her second child, just weeks after her first child was made a ward of the state. Also, she allegedly has no clue who the dad is. The cover teases that she's "unfazed about losing daughter Leah," has "slept with 8 guys in 2 months" and admits to being a "sex addict."

Amber isn't a stranger to negative press: She was castigated for yelling at her daughter and roughly yanking her up by the arms on the show. Then followed the felony domestic violence charges for punching, slapping, kicking and choking the father of her daughter, and the Child Protective Services investigation. Now, British tabloids are scrutinizing the single mom's sad dating life (at the same time that they're providing tips on getting her "look"). Even Perez Hilton has joined the handwringing: "While all this [is] going on, WHO IS WATCHING YOUR BABY???" The National Enquirer recently claimed that she's also nursing a drug addiction. Radar has devotedly followed the Amber beat in recent months, publishing photos of her partying and reporting that her daughter "is so confused about who her parents are she refers to her grandmother as 'mom.'"

It's all reminiscent of tabloids' mommy-shaming of Britney: Remember, she was shunned for driving with her baby on her lap and smoking in front of her sons. Then came the custody battle and first-hand accounts of her bad mothering. Now, of course it's inadvisable to drive with your kid in your lap and subject them to second-hand smoke, and Amber's yelling and violence would certainly disturb any child psychologist -- but, speaking of psychology, you have to wonder why we get satisfaction from aiming at such easy freaking targets. Amber comes from a poor background, claims to have been physically abused and says she basically had to raise herself. Now she's a high-school dropout struggling with depression, a serious anger problem and trying to raise a baby (and now a second, if the reports are true).

There is nothing even remotely unusual about her story -- just check the stats on teen pregnancy -- and yet she's making international news. This week she ranks on USA Today's Celebrity Heat Index, along with Kate Middleton, Angelina Jolie and -- oh, looky here -- Britney Spears, who is getting ink because her boyfriend allegedly assaulted her. From the lower-class comedic relief in Shakespeare to late-90s daytime talk shows, we sure do love having some white trash mixed in with our more noble sagas. Well, ain't we classy.