Who can deny the adorableness of a pie you hold in your hand? It turns out I can't 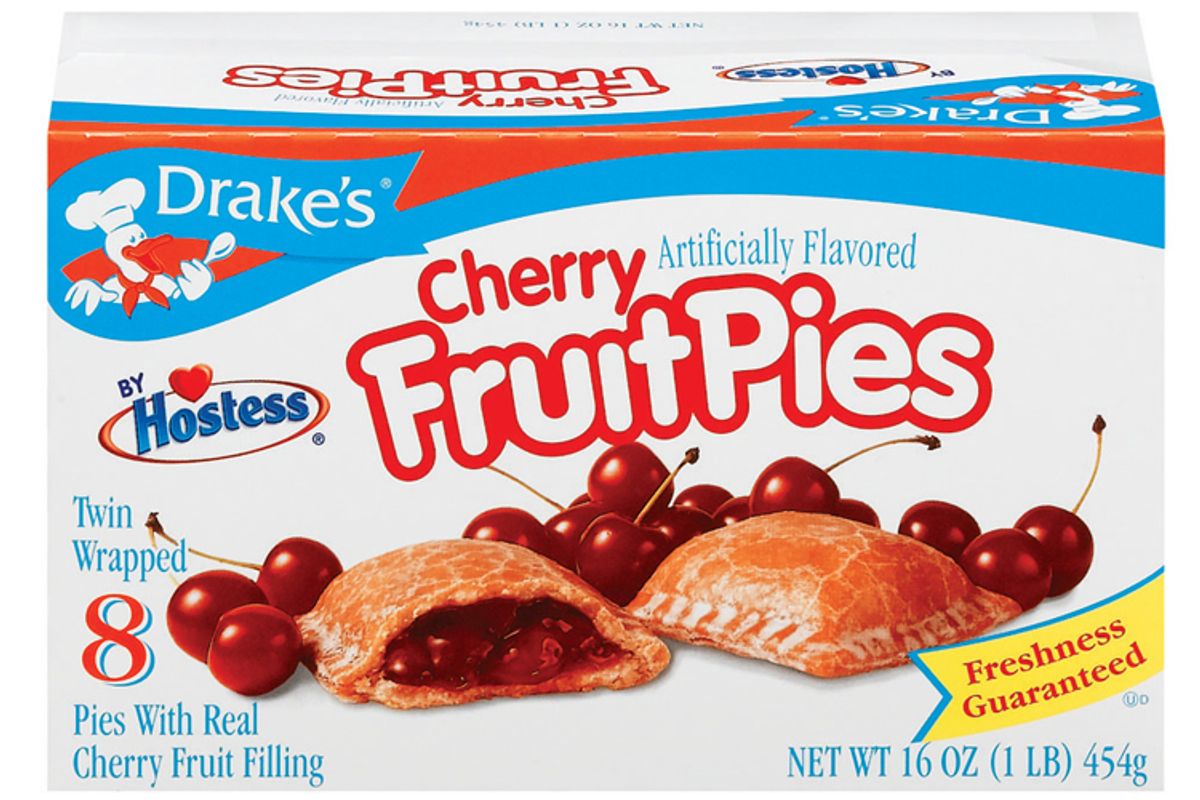 This great land is filled with great lovers of pie, but among these there is a smaller, even more passionate flock: the devotees of handpies. For us, there is no love like the love we have for fruit encased in glazed pastry, for the adorableness of pie you can hold in your hand. My girlfriend, in fact, even once took "Handpie" as a nickname, at least until the vaguely porny undertones became finally too much to ignore.

But after decades of enjoying empanadas, turnovers and even the magical and beloved Hubig's pies of New Orleans, I was reminded today that my touchstone handpie will always be Drake's. Creators of Ring Dings and Devil Dogs, their art of mass-produced pastry knows no equal ... OK, that's kind of a lie. I'm not really a fan of their other products. But their cherry pies! Their cherry pies are like the bricks in heaven's castle.

I confess, though, that I did not come to today's cherry handpie honestly. It belonged to a friend, a great lover of food, and he got it for his birthday. We were happy for him, celebrating with beers and burgers, when I moved to open the Drake's. To the shock of the assembled, he refused to share it, hoarding it, safe in its crinkly waxed-paper envelope. Of course, I then wanted it like I have wanted nothing in my life. I pleaded with him. It's been years since I've had one. It's something I should write about, so that my dear readers might seek to find its pleasures. No. "No," he said, pulling it close to his breast. Then the bastard got drunk and forgot it on the table on the way out of the bar. I put it in my bag, then bid him goodnight. Hey, happy birthday, buddy.

I suppose I should have moral qualms about this, but frankly, whatever traces I had dissolved when I opened the package to find the pies' familiar, unusual shape and the aroma of state fairs. Instead of the bloated Pop Tart most handpies resemble, out came two modest squares, looking like enthusiastic toasted raviolis. By making them small, Drake's achieves a higher pastry-to-filling ratio than the standard models, and this is a good thing, because the crust is tender, giving way strangely to the glaze. You chew, and the slick white sugar crumbles ever-so-slightly between the teeth. It's like you can hear it think about crunching.

And the filling has some brawn: The cherries are almost chewy, the clown-red goop more liquid than gum, just a little tart to balance the rocket-tail sweetness. It tastes like Cherry™, the taste of cherry candy, the taste of cherry cough drops before their medicinal flavors would kick in. Then again, did cherry cough drops ever even have medicinal flavors? I seem to recall, as a child, just eating them like candy anyway. So maybe that's the secret of the filling: It tastes like cherry cough drop candy, the truest flavor of childhood.

I ate and took a sip of coffee, which, as we all know, is one of the great tests of a pie -- does it make your coffee taste better? My coffee tasted like a chocolate bar.

I thought back to my first-ever Drake's handpie, which I can actually remember, because I discovered them relatively late in life -- relatively late for a supermarket checkout snack food, anyway. I was in high school, just past my pudgy years, and an obsessive counter of fat grams. (It was the '90s.) I recall being horrified at the numbers on the packaging. Twenty-six grams of fat. Three-quarters of a day's worth of saturated fat. How many stomach crunches does that equal? How many push-ups? How many hours of roller-blading? I was disgusted. And since the line from disgust to depraved indulgence is far thinner than we ever think, I tore open the package and was changed forever.