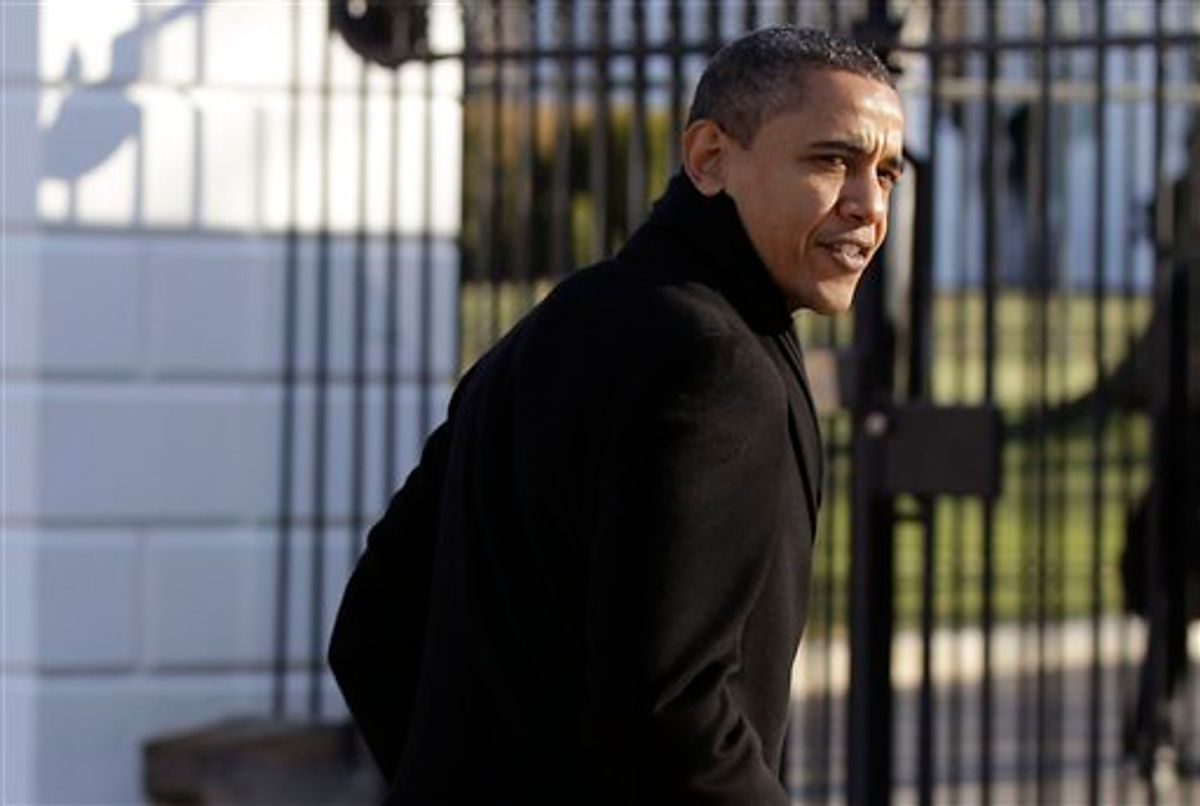 President Barack Obama walks across Pennsylvania Ave., and back to the White House following his working meeting with business leaders at the Blair House in Washington, Wednesday, Dec., 15, 2010.(AP Photo) (AP)
--

The White House today released a summary of the results of its Afghan war review (the full version is classified), attempting to put a positive spin on a war that is claiming more American lives and dollars than ever before.

The review summary offers no specifics or evidence to back up its conclusions, but here is the key paragraph:

Specific components of our strategy for Afghanistan and Pakistan are working well and there are notable operational gains. Most important, al-Qa’ida’s senior leadership in Pakistan is weaker and under more sustained pressure than at any other point since it fled Afghanistan in 2001. In Pakistan, we are laying the foundation for a strategic partnership based on mutual respect and trust, through increased dialogue, improved cooperation, and enhanced exchange and assistance programs. And in Afghanistan, the momentum achieved by the Taliban in recent years has been arrested in much of the country and reversed in some key areas, although these gains remain fragile and reversible.

The review also falls back on the "beginning of withdrawal" date that President Obama first set out in his speech at West Point a year ago. "[O]ur strategy in Afghanistan is setting the conditions to begin the responsible reduction of U.S. forces in July 2011," the review says.

As most people know by now, that date is virtually meaningless, as it has never been paired with specifics about how many of the 100,000 U.S. troops in the country will be sent home. And the administration has also been talking about keeping troops in Afghanistan until at least 2014.

As we predicted yesterday in our piece offering context about the state of the war, Obama's review does not discuss metrics that reflect a grim state of affairs in Afghanistan: that Afghans are increasingly pessimistic, that far more U.S. troops are dying than ever before, that the air war has been stepped up vastly, and that we are now spending $120 billion annually in Afghanistan.

Meanwhile, another Afghanistan report just came out that will not be getting as much press attention: the Red Cross has concluded that the problems of civilian casualties, internal displacement, and lack of access to medical care have all gotten worse.