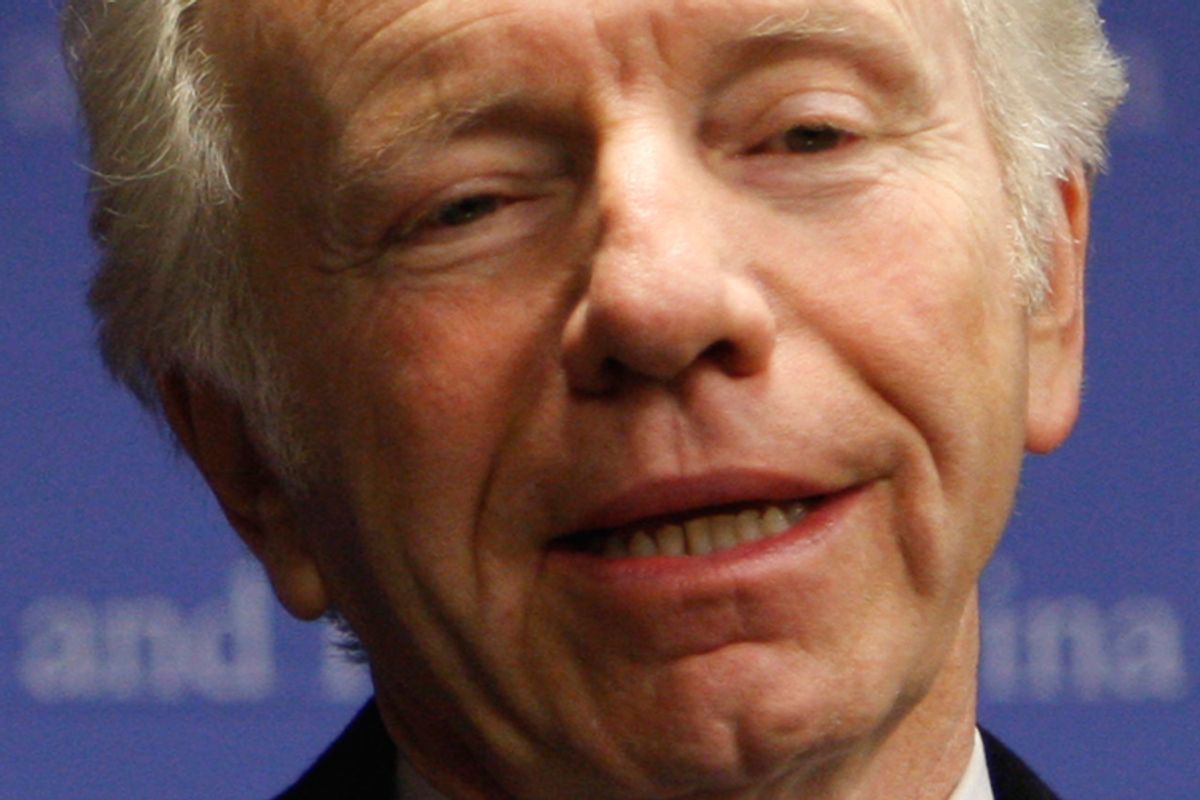 It looks very much like "don't ask, don't tell" will finally be repealed, 17 years after the discriminatory policy was enacted. And it's thanks, in very large part, to the tireless work of independent/"Connecticut for Lieberman" Sen. Joe Lieberman. Yep, Joe Lieberman, the single most annoying man in the United States Senate -- the august home, since the days of our founders, of America's most annoying citizens -- was instrumental in righting a fundamental injustice. Andrew Sullivan has anointed him a "civil rights hero," and barring some last-minute betrayal or successful Republican attempt to delay the vote until the New Year, he may actually earn the title.

But it's still totally OK to hate the guy.

Seven months ago the guy introduced a bill that would automatically strip Americans of their citizenship if they were charged with "a terrorist act." He named it "the TEA Act." Why did he do that? Because he's a political troll. Not in the "living under a bridge eating goats" sense, but in the old Usenet sense of someone who purposefully enrages and frustrates members of a community, while pretending to have no idea what he's doing.

Joe Lieberman gets his kicks trolling the left -- how else to explain why he nearly torpedoed the fragile healthcare reform process by blatantly reversing himself on the Medicare buy-in?

Even before Iraq, this was the guy who took to the Senate floor to ponder "the moral consequences for our country" of Bill Clinton's misbehavior. He regularly flirted with banning "indecent" music and video games. Before Al Gore picked him as his running mate -- whereupon Lieberman did all he could to sink the campaign from within, by throwing his debate with Cheney and repeating GOP talking points during the recount -- Lieberman even voiced support for Social Security privatization.

That whole miserable history of sanctimonious opportunism aside, it's true that Joe Lieberman has always proudly fought for the rights of gay and lesbians to serve openly in our armed forces.

While his opposition to "don't ask, don't tell" is one of the handful of positions Joe Lieberman hasn't reversed himself on, his support for gays in the military is pretty much directly tied to his blood lust. Of course he wants gay people in the military -- he wants everyone in the military, and he wants the military everywhere. He supports the right of every American to serve his or her country regardless of race, creed, color or sexual orientation, and he also supports making those brave young heroes invade and occupy the entire Middle East, forever.

So you're still OK hating the guy.