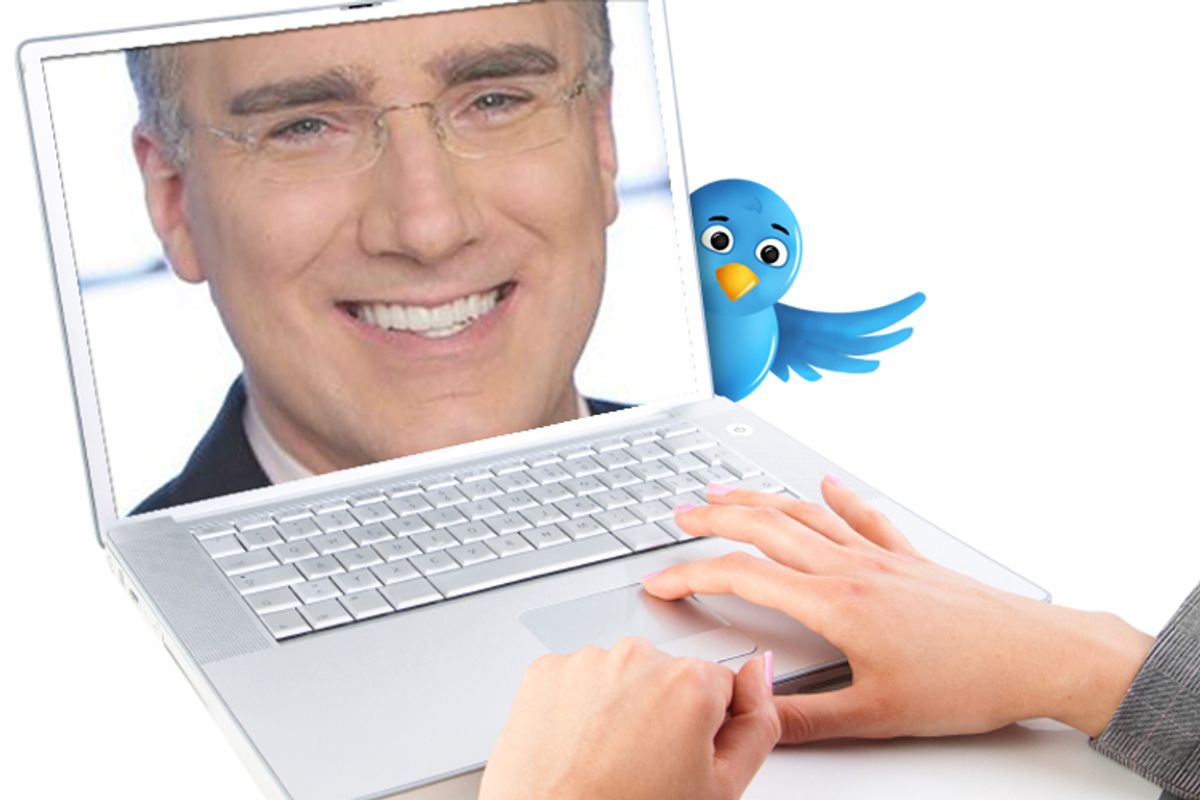 Keith Olbermann, as you may have heard, announced on Thursday afternoon that he has suspended his Twitter activity "until/if this frenzy is stopped." We asked the feminist blogger who helped kick up the "frenzy," Sady Doyle,  for her account of how this all happened.

Late Wednesday night, long after I'd promised myself that I would sign off the Internet, I found myself Googling Keith Olbermann's Twitter feed. He had retweeted a link to an article alleging that one of the women accusing Julian Assange of rape had "ties" to the CIA. That article also gave the name of the accuser. This, I understood to be a universally acknowledged no-no, when it came to subjects of an ongoing sexual assault investigation. So Keith Olbermann, one of the biggest names in left-wing journalism, was publishing unsubstantiated claims that smeared the subject of a rape investigation, and he was failing to uphold basic standards. I thought this was worth sharing. I found the link to the tweet, and I clicked through, and that's when I saw it: the big yellow box with the padlock.

"This user has protected their tweets," it read. I sent out a brief, confused tweet about Keith Olbermann locking down his Twitter rather than face online criticism -- which would soon turn out to be eerily psychic -- and Anna Holmes, formerly of Jezebel, corrected me: "He blocked you?" Amaditalks, a user who'd been debating the Assange case with Olbermann, confirmed: "No, he didn't lock it, he blocked you." Soon, I'd confirmed it myself.

Second thought: Keith Olbermann knew who I was?

Wednesday morning, I was a girl who ran a moderately trafficked feminist blog. I had about 1,500 Twitter followers. I was frustrated with the way the Julian Assange rape case had been treated by fellow left-wing media figures, including Keith Olbermann, but especially Michael Moore, who minimized the accusations while pledging bail money to Assange. I didn't know yet that he had also misrepresented the accusations against Assange  (they're for rape, not that his "condom broke") on Olbermann's show. I tweeted a joke, about hoping a bunch of rape survivors pulled a "Roger & Me" outside of Michael Moore's office, and directed it at Moore's Twitter. Then it hit me: The dude's on freaking Twitter. He can hear me. More accurately, he can hear us.

I suggested that people frustrated by Moore's actions tweet at him until he responded. Anti-rape activist Jaclyn Friedman suggested we use a hashtag, and came up with one, #MooreandMe. I wrote a blog post. And it was on. Thousands of tweets, links from every corner of the blogosphere, and -- surprisingly -- a response, that evening, from @KeithOlbermann himself.

But not, you know, a response to me. Because he blocked me.

Olbermann was incensed. He went on for two hours, accusing Mediaite reporter Tommy Christopher of being a "hatchet man" with an anti-MSNBC agenda because Christopher asked him whether he knew the charges against Assange, demanding that Amaditalks provide him with "the charges" (a court reporter's account is here), demanding "retractions" from another user, and otherwise lashing out. Me, I wrote a blog post about how he'd blocked me. The next morning, he was at it again, tweeting frantically, attacking and swerving and dodging and blocking more protesters. When I saw someone say he'd blocked them, I retweeted it. (My colleague, Amanda Hess, noted later that he'd responded to her tweet on the matter, then blocked her too.) And then: Well, then the pressure apparently got to him. That's when Keith Olbermann, one of the most well-known figures in left-wing journalism, just up and ran away.

Except that it wasn't a frenzy. It was a protest. Olbermann had no problem with describing the notoriously unruly Anonymous as "online activists," and yet, when online activists who happened to be feminists took issue with him, well ... they'd gone FRENZIED! They were like sharks in the salty sea water of Twitter, thrashing and chomping at Keith Olbermann's tender, online flesh!

They had reason to protest. One of the chief objections, from fans of Moore and Olbermann, is that Assange isn't being charged with rape. "He was accused ONLY of consense.sex w/o a condom," wrote Twitter user MariahWestwind. "u r all fucking retarded, really fucking dumb……….it was consensual sex and his condom broke which is a crime in sweden u fucking retards," wrote a commenter on my blog, "Ralph," who was sadly deleted. This is demonstrably wrong. It's untrue. But Ralph, Mariah and all the others have reason to believe it. Because they got the information from the news. They got it from Michael Moore. And they got it from Keith Olbermann.

People trust journalists: If a journalist says something, like "the term 'rape' in Sweden includes consensual sex without a condom" (Olbermann's own, demonstrably false, as-yet-unredacted words), most people will believe that what he has said is true, and act as if it is true, without doing further research. Because the job of a journalist is to tell people the truth, to give them all of the information they will reasonably need, and to redact and correct his statements if they are later proven wrong. Statements made by journalists, particularly those as prominent as Olbermann, have measurable impact on how people make decisions: MariahWestwind is basically quoting Keith Olbermann. There's a rape investigation going on, and Mariah doesn't know it. Because Mariah trusted Keith Olbermann to tell her the truth, and Keith Olbermann failed to honor that.

Keith Olbermann failed to honor the trust of people who depend upon journalists to tell them the truth, over an issue (WikiLeaks) that is about the right of people to know the truth. Chew on that one for a while. Because it tastes real, real funky.

I'm working myself up into an Olbermannesque lather -- you, SIR, have been proven WRONG, SIR, and to the extent that you are unwilling to corRECT your STATEments, they are rendered LIES, SIR! -- so maybe I'll point out something else: Even though Olbermann is influential on Twitter, he's running away from it largely because he doesn't know how it actually works. On the Internet, Olbermann's style of old-media authority doesn't hold up. He selectively responded, and thought no one would call him out on it; he was wrong. He blocked protesters to shut out their voices, and apparently thought they wouldn't be able to tell a wide audience about it; he was wrong. He attempted to control the discourse, to sit at the center of it like a news anchor behind his desk, to exercise a centralized, access-dependent control; he was on the Internet, where hierarchy breaks down, where people are able to interact with each other and influence each other without the buffer of celebrity, but he didn't get it. Even his voice -- that booming, stentorian instrument -- was gone; without the immediate gravitas it tends to lend his statements, he sounded like a kid who had gotten in over his head.

Wednesday morning, I was nobody much. Today, I'm apparently responsible for the biggest celebrity Twitter meltdown since Matt Lauer pissed off Kanye West. Because that -- SIR -- is how the Internet works.

Olbermann may be back. He's tweeted a friendly message at fellow media superstar Larry King. One can't imagine that his inglorious retreat rests well with him. But he might have learned a valuable lesson: On the Web, there are no anchormen. There are just a bunch of people giving the news. Status is given to those people, but only to the extent to which they can consistently get it right.

Me, I've got better things to think about than Keith Olbermann. I still haven't heard from Michael Moore.

Update: The original version of this piece stated that Assange has been charged with sexual assault. But as of now, he has only been accused of it -- not formally charged. The piece has been altered to reflect this.