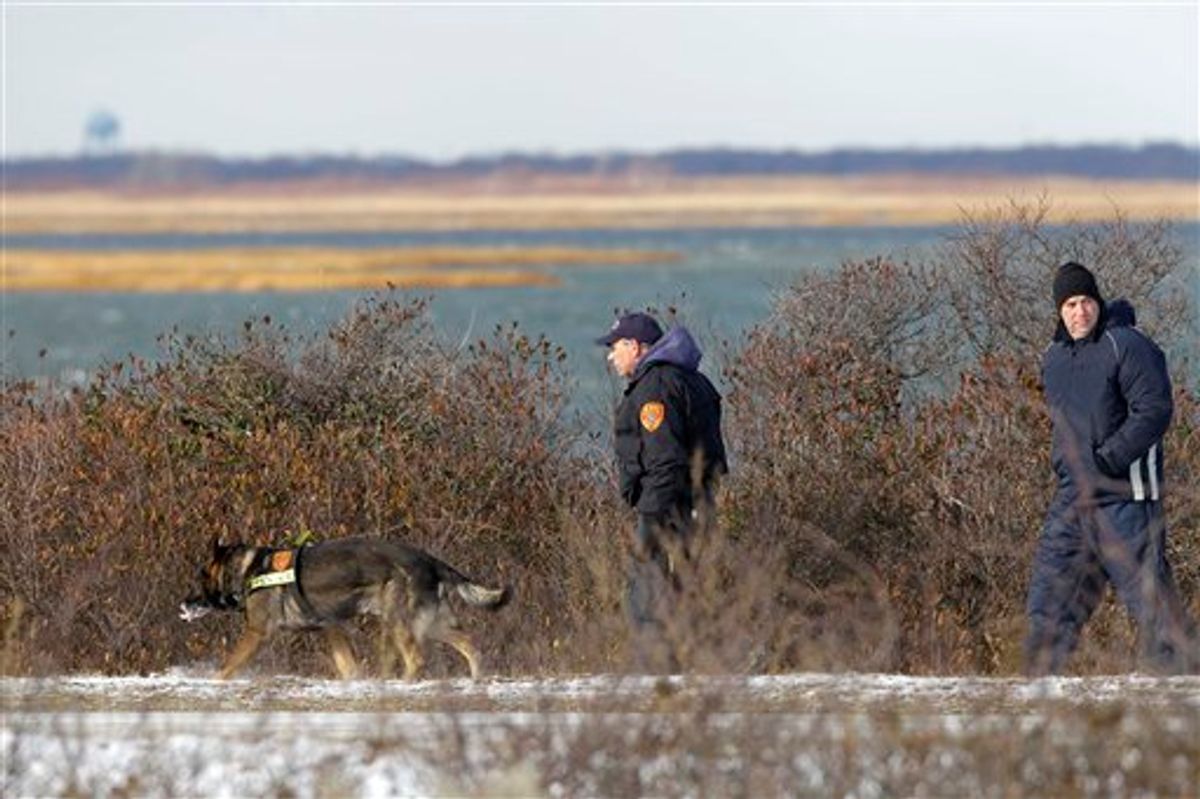 Authorities search in the brush by the side of the road at Cedar Beach, near Babylon, N.Y., Tuesday, Dec. 14, 2010. Police looking for a missing prostitute on Long Island's Fire Island have discovered three bodies and a set of skeletal remains near Oak Beach since Saturday. Investigators are considering the possibility that a serial killer may have dumped four bodies along the same quarter-mile stretch of beachside road, a police chief said Tuesday. (AP Photo/Seth Wenig) (AP)
--

As New York confronts the possibility that there's a serial killer on the loose, many have taken note that this case looks a lot like what we see in the movies: The victims are all women, and at least one is suspected to be a sex worker. When it comes to serial murder, it turns out fiction really does reflect reality. A report was released last month finding that 70 percent of known victims of serial killers are women (consider that only 22 percent of homicide victims in general are female); and it turns out sex workers are 18 times more likely than "normal" women to be murdered. Why might this be? Well, in the words of the Green River Killer, who targeted prostitutes:

Since they're doing illegal work, sex workers have to be secretive and discreet. They often work in isolated and industrial areas. They get in cars with strangers. There are rarely detailed records of transactions. Many are drug addicts and estranged from their families, so they are less likely to be reported missing. Anyone who knows anything about a girl's whereabouts is likely involved in the trade themselves, so they aren't super eager to speak with police. What's more, as we saw with the Robert Pickton case in Vancouver, police sometimes discount tips from working girls (all the more reason to not risk talking to them in the first place).

It just so happens that Friday is International Day to End Violence Against Sex Workers, which was created in memory of the victims of Gary Ridgeway, a.k.a the Green River Killer. Similar to the Pickton case, local sex workers knew Ridgeway's identity, but, as prostitute-turned-performance artist Annie Sprinkle puts it, they "were afraid to come forward for fear of getting arrested, or the police didn't believe those that did come forward, or the police didn't seem to care."