When I was stoned at the Nixon White House party 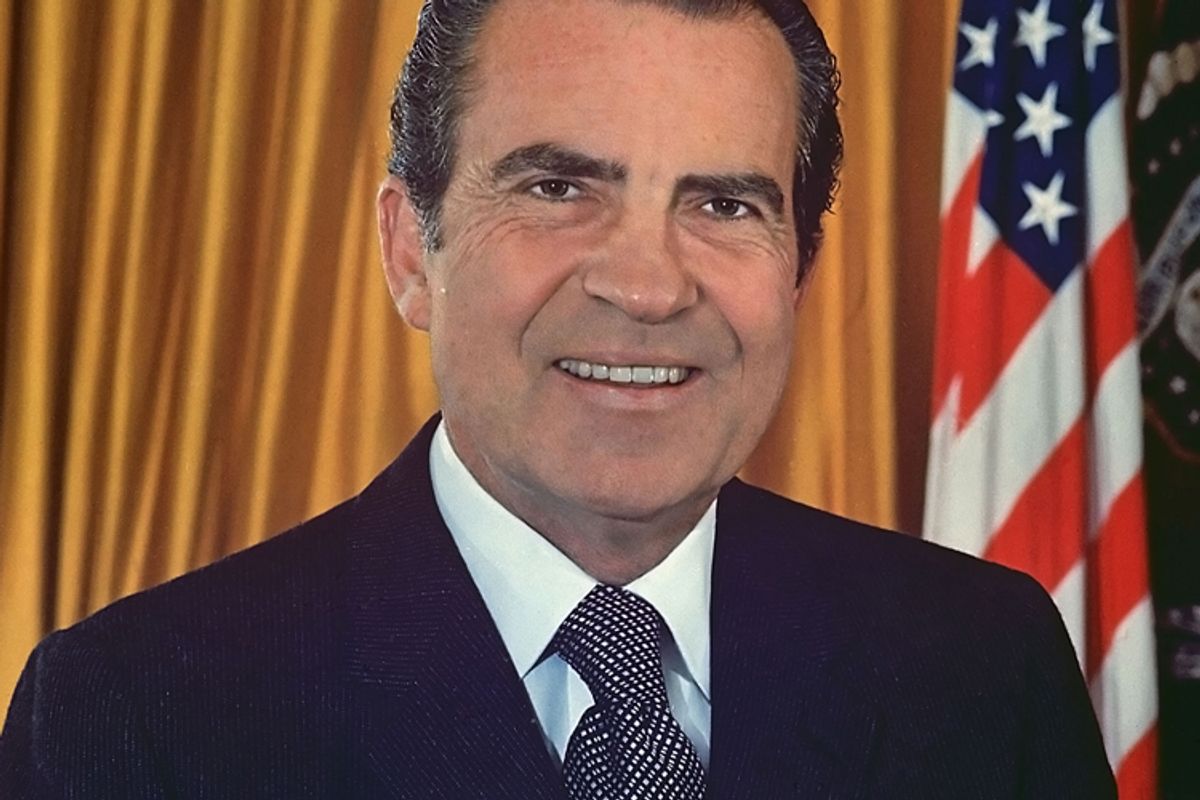 In our minds, it was an act of defiance: I'd put a joint in my purse. When my sister gave me the signal, we'd each say we had to go to the bathroom where we'd meet, light up and take a few quick hits off the joint, then go back out to the party.

It was 1971. I was a senior in high school; my sister, several years older, was a secretary and still lived at home. She hadn't gone to college. Actually, it hadn't been an option. My father, who himself was forced to drop out of high school to help support his family, didn't think girls should go to college. Or at least not his girls. I always thought it would have made more sense for him to insist on a good education. He saw what an education could do. He worked as the photo bureau chief for the New York Times in Washington, D.C., where he called among his personal friends some of the country's most highly educated individuals within the nation's government and media. That meant U.S. presidents, too.

I would love an invitation to the White House today. But at 17, it wasn't cool. It was so bourgeois. My sister and I were placard-carrying antiwar demonstrators, and my waist-length hair, long skirts and beads were an expression of my distaste for everything my parents stood for. That their daughters were part of a counterculture opposing the policies of the U.S. government didn't seem to register on my parents. So when the invitation came for the annual White House Christmas party, my mother issued the order: You're going to the White House, you're going to look good, and you're going to behave. My mother was a former Marine sergeant. You didn't argue.

My sister and I weren't the big statement kind of people; ours was a more subtle form of protest. Lighting a joint seemed innocent enough. We also thought it would be pretty cool to smoke a joint before going, too. So, while my mother sat on a stool in the kitchen having a scotch and soda while she waited for my father to change upstairs, my sister and I got high in my third-floor bedroom, blowing the smoke out a dormer window cracked against the December cold.

It's pretty strange being stoned around your parents, even stranger when you're stoned around police, security guards, officials of every sort, and a huge crowd of children and adults giddy with excitement and anticipation. And you're in the White House.

Was I smiling too broadly? Were my eyes glazed? And where was my sister? I found myself wandering through the rooms alone, overwhelmed by the opulence. Actually, my parents and younger brother were nearby, sampling cookies and punch. I was sure I was being followed. Were there drug-sniffing dogs then?

I had to go the bathroom. When I came out of the stall I saw my sister across the bathroom standing by the sink. She put her thumb and forefinger together as if holding a joint and brought it to her lips. Between us were a half-dozen women and children. She smiled. As I pushed past her I told her I didn't want to, that it was too dangerous, and left before she could pull me back into a stall with her.

But something was happening in the hall. There were quiet murmurs. There he is, I overheard people saying. And when I followed their gaze I saw the president among the crowd. He was making his way through the party, laughing and talking, greeting people by their first names. He seemed comfortable. And happy. We must have been standing near the band because all of a sudden Nixon was sitting at a piano playing and singing Christmas carols. Somehow, not by my own volition, I was in the group nearest him. There I was, stoned, singing with the president. I remember thinking he seemed just like a regular person, that he was just a man. In many ways he reminded me of my father.

I don't remember anything else about that night. At home, my sister and I probably went directly up to my room on the third floor, spent a couple of hours watching television, and pulled out that joint in my purse. We probably laughed at how messed-up we had been and how it would have been impossible to actually carry out our plan. It didn't take me long to understand that the act of defiance my sister and I planned had more to do with youthful ignorance than political activism. It took me much longer to grasp that my sister's interest in all things mind- and mood-altering was an addiction. And finally there is this: As much as I hated the Vietnam war and Watergate and came to revile Richard Nixon, I have to admit I cried when he died. I hated him, but still, I cried. In some ways I felt sorry for him, for whatever had happened in his life that created the demons he carried with him, for surely that must explain -- at least in part -- who he became. Of all the images of Richard Nixon that flash through my mind -- those pictures of him defiant, angry, even crazed-looking -- I always come back to him at that Christmas party, sitting at a piano singing Christmas carols. I can't find any documentation for a press corps Christmas party in 1971! I found the invitation for 1972, and a reference to the 1970 party in a press briefing in early December. In 1970 and 1972, families were invited to the White House. We would have gone to those events, too. Unfortunately, I can't remember. It could be that all those events have merged into this one Christmas party that I remember as 1971. This is the only photo I have of me with Richard Nixon. The sister in the essay is the one looking at Nixon. I'm also giving him a good stare: I'm in my mother's arms, thumb in mouth.