From tiny binoculars to 4-foot chains, what ends up in the human stomach is pretty unbelievable. An author explains 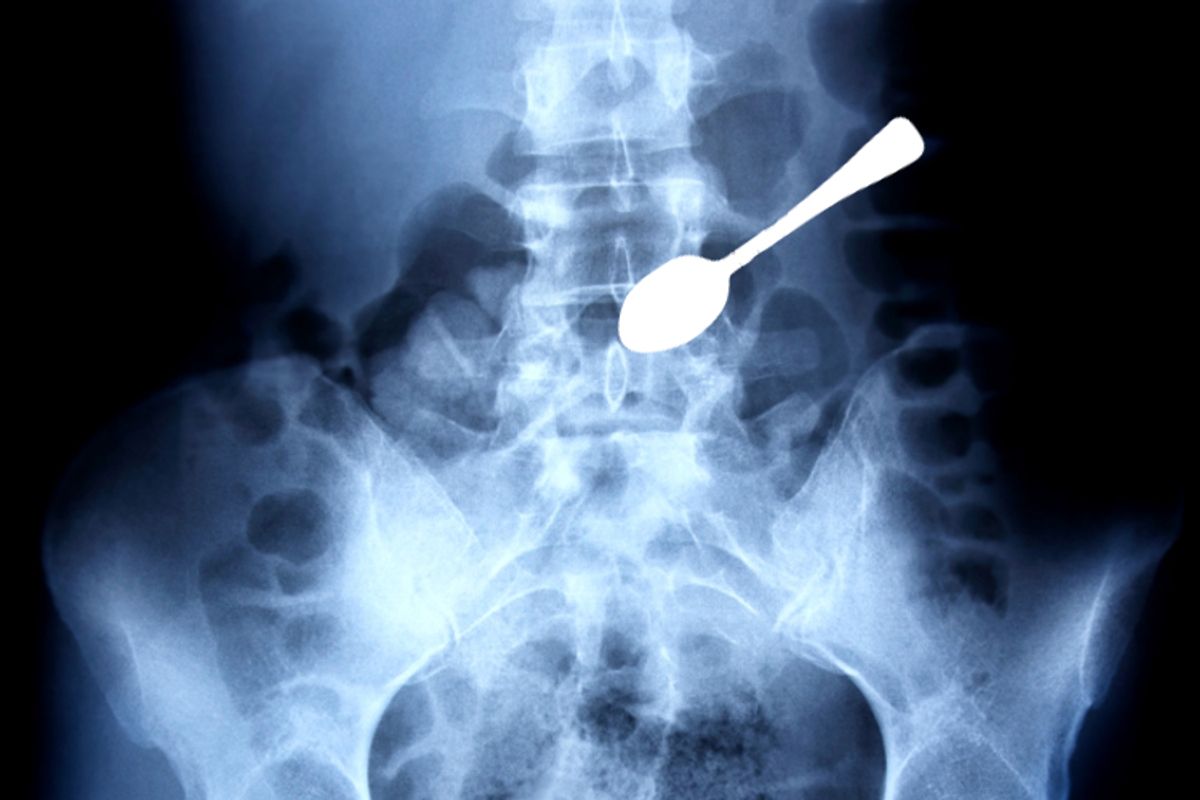 A set of drawers in Philadelphia's Mütter Museum of human pathology contains some very curious artifacts: thousands of objects, from umbrella tips to diminutive opera glasses, that have been extracted from the human body. They were swallowed or inhaled (sometimes accidentally, sometimes on purpose) and later removed by Dr. Chevalier Jackson, a man who dedicated much of his life to removing odd objects from people's insides. The collection is a remarkable testament to the strangeness of the human experience -- and our ability to swallow.

In her new book, "Swallow," Mary Cappello uncovers the stories behind those objects, and the peculiar life story of Chevalier himself. Cappello is a professor at the University of Rhode Island and the author of the bestselling book "Awkward," a meditation on uncomfortableness. Here, she packs her story with surprising imagery and extravagant lyricism, taking a highly literary approach to the subject -- meandering from Chevalier's biography to the odd story of early 1920s women who compulsively ingested pieces of hardware.

Salon spoke to Cappello over the phone from her home in Rhode Island about the complexity of our digestive tracts, sword swallowers' tricks and the fascinating story of a man who couldn't stop consuming dangerous things.

How did you become interested in people who swallow unusual things?

I happened to be making a visit to the Mütter Museum, ostensibly because my partner was writing about peristalsis, and we went to the see this bowel that's there, and rounding a corner we happened upon the collection of foreign bodies. It has this magical quality. You open the drawers -- you don't know what you're going to find there -- and you discover all these objects that people have swallowed or inhaled. Like most people, I was just sort of shocked and amazed by the strangeness of this collection -- the fact that somebody had extracted thousands of these things, and then the fact that the doctor, Chevalier Jackson, had framed each one of them, separately, documenting them very carefully, separating them into types. These objects seem to have a sort of aura; they're not like any other objects.

As you touch on in the book, there's a kind of long-standing cultural fascination specifically with the act of swallowing. In a mythological sense, the story of humanity, through Adam and Eve, started with swallowing.

Absolutely. And not just with swallowing, but the swallowing of a forbidden object. Sometimes when people learn about the book, they immediately want to present me with stories of people entering objects into other orifices, anuses and genitals, that sort of thing. There's a lot to be said about the relationship between self-penetration of other parts of the body and people who voluntarily or purposely swallow things, but I'm much more interested in the mouth than any other bodily orifice, because the mouth seems to me to be the part of the body in which the most is going on. Language issues from our mouths. We both breathe and eat through it, and it's the seat of knowledge and desire and love. And once you start to investigate the physiology of swallowing, it's, medically speaking, one of the most complex of our physiological processes.

In your research, you encountered lots of stories of people swallowing strange things. Which one stood out the most?

One story that I recount in the book tells of a child who is hiding a coin in her mouth because it's the family's last dime and her father is alcoholic and he's going to spend the dime on liquor when the family needs to eat. The father intends to choke the child to get the dime and then the dime obstructs the passageway and Jackson comes to rescue. It's an amazing story.

The one story from the book that really stuck with me was the story of the "Human Ostrich."

Yes, I read about him in an article that appeared in the Brooklyn Medical Journal for 1922. He would swallow things that members of the audience would pass up to the stage. In the course of an evening, this might amount to 80 pins, a lot of hair pins, and long wire nails, most of which, according to the doctor who wrote about him, he would excrete without harm to himself. One night, however, he accidentally swallowed a 4-foot-long window chain that he had been inserting into his throat and pulling back out (much in the way a sword swallower might with a sword). He arrived at Dr. Hopkins' offices in a great deal of pain, and begged to be operated on. Upon opening his stomach, Hopkins discovers "129 pins, 6 hair-pins, two horseshoe nails, 12 half-inch wire nails, 2 door-keys, 3 chains, and a large ring."

From here on in, the unnamed Human Ostrich decides to give up his career and try to make a living selling pictures of the cut the surgeon's knife inflicted on his stomach, but a few months later he returns to the hospital with more stuff inside him and claims he was forced to swallow things by a group of men who recognize him as the "Human Ostrich" in a bar. Perhaps his compulsion was fed by his audience's need in a symbiotic sort of way. As I put it in the book, "he was forced to swallow hard, sharp bits of the object world by a hungry crowd."

The Mütter Museum isn't the only place with collections of curious swallowed objects. Why are people so interested in exhibiting them?

I think it's partly the nature of that which is incongruous: Something appears where it's not supposed to appear. And there's this sense of, "How did this possibly happen? It seems impossible. How do you possibly swallow a tack? How do you swallow a padlock?" Even if they're accidental, there's something sort of tantalizingly weird about that. I don't know if this is why everyone is drawn to it, but one of the particularly magical charges I find in the collection is that the objects are very commonplace. Something as common as a button is a threat to someone's life.

But human beings have been entertained by people who swallow strange things, who eat beyond capacity, who swallow swords -- and test the human gullet -- for centuries. I've gotten to know a sword swallower as a result of this work, and I really admire and respect what he does. I'm constantly obsessed with the lines between medicine and freak show, or medicine and the circus, and how we come to value one kind of act in the name of science and devalue another. I'm always interested in people's willingness to suspend or subvert or reverse or undo aspects of the body that are considered automatic.

I can't stand watching a sword swallower. It makes me panic and worry that they're going to hurt themselves. There's also something very disconcerting to me about people doing biologically inappropriate things to their insides. Why has this form of entertainment endured?

The very act of sword swallowing calls into question the extent to which the presumably automatic is automatic. What [sword swallower] Dan Meyer's work demonstrates is that you can habituate the body to do certain things. You're led to question the way in which the body does what it does -- that it's not natural so much as it is a response to a series of habituations. We train the body to do the things that it does. I say I get choked up, no pun intended, when I watch Dan Meyer perform because there is something sort of poignant about a human being going to such lengths to elicit a response from other human beings.

How does a sword swallower train his or her body to do that?

It's not a pretty thing to imagine. He has to introduce different kinds of objects into his throat in the course of a day, days morphing into weeks, morphing into months, morphing into years. It takes years of practice, of literally practicing putting things in. And he also has to overcome all these reflexes, from the gag reflex to the wretch reflex.

What was so fascinating about Chevalier Jackson, the doctor responsible for the Mütter Museum's collection?

He was a polymath -- by which I mean he was a physician but he was also a visual artist. He was a woodworker and he designed his own instruments. He was a tremendously skillful writer as well. One of the things that interests me about him is that while he ended up saving thousands of lives, he wasn't drawn to medicine by a desire to save lives. He was drawn to medicine because of his imaginative drift. He wanted to see what the inside of a human body looked like. He was a humanitarian who introduced the Federal Caustic Act to Congress and one of the most ingeniously helpful doctors in the history of medicine. He saved thousands of people's lives by perfecting a technique that most people were too trepidatious or didn't have the patience to develop; he used broncoscopes without anesthesia  to enter the delicate passageways of the upper torso and treat each foreign body as a unique mechanical problem. His technique, I think, is unsurpassed to this day -- there simply are no removers of foreign bodies who have the kind of skill, this awesomely deft skill that Chevalier Jackson had.