How I came to dread Christmas

My dad instilled a love for the season in me. But his fight with Jackie Kennedy broke him -- and my holiday spirit 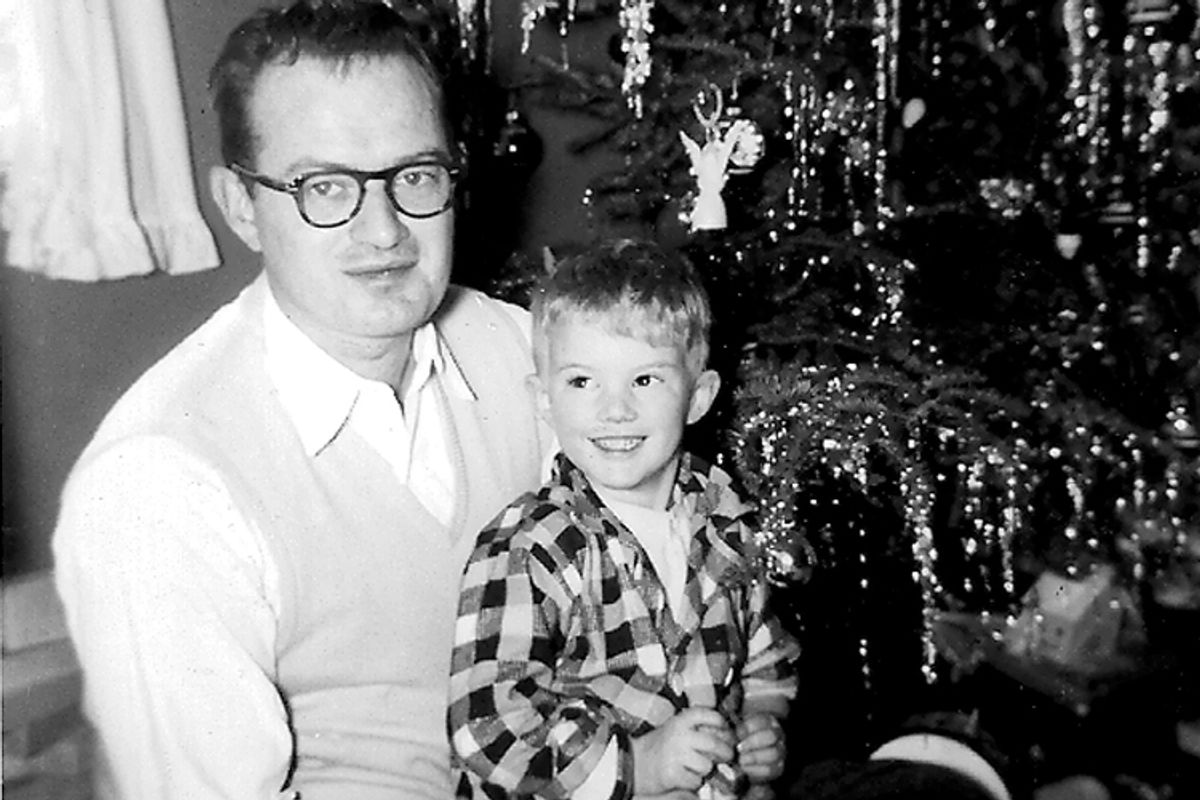 Father and son at Christmas in better times
--

My father loved Christmas. From the time I was very small, in the days after Thanksgiving I remember him towering over me with a huge smile and gleaming eyes, proclaiming, "It's less than a month 'til Christmas!" It was the most excited he got about anything. He always believed this Christmas would be the best, the answer to all his hopes and dreams, delivering joy to his world.

He never went to church, never spoke of God. But he turned Christmas into his own religious rite. He played carols loudly on the stereo. Every Christmas Eve he read the same three things: "little tree," by his favorite poet, e.e. cummings, from the same tattered volume he'd carried through the trenches of Okinawa; "The Night Before Christmas"; and the gospel according to St. Luke. As he read, he infused the words with the drama of a onetime actor. He finished on such a note of reverence that this phrase is the only thing I can quote from the Bible, "But Mary kept all these things, and pondered them in her heart."

My father's passion infected me. I too came to believe Christmas would bring miracles. I believed so much that when my father came to me one December with a long look on his face, bearing the terrible news that there was no Santa, I just smiled, nodded my head and kept believing anyway. The next year my father had to come explain it again. Finally I got it, but I wasn't happy about it.

The promise of Christmas grew in me each year until it became too large. The biggest stack of presents under the tree with "John -- from Santa" on them, all of Mom and Dad's beaming looks, even the many candy canes on the tree, most of which I chewed up one year, couldn't hope to fill the yawning cavern of hope and need I'd attached to Christmas.

I found myself late one Christmas morning sitting on the floor surrounded by the scattered remains of present opening, feeling forlorn, as torn as the wrapping paper, as empty as the boxes my sisters and I had grabbed toys from.

Yet instead of seeing that feeling as a warning to back off from my crazy hopes, I upped the ante. The next Christmas Eve I woke in the night, violently ill with anticipation. And again I found myself on the floor, alone and despairing, this time with a bellyache.

I never let on that Christmas had become an ordeal. I smiled for my father's camera. After opening each present I crowed, "Just what I always wanted!" until it became a family joke.

By Christmas of 1966 I had learned to stow away my wildest hopes for Christmas.  Those hopes were about to start attaching themselves to the gifts of my time of life and the times I lived in -- sex, drugs and rock 'n' roll -- the rites of a pagan religion.

My father was a writer named William Manchester. After JFK's assassination, Jackie Kennedy commissioned him to write a book that became "The Death of a President." But that relationship devolved into an epic battle over the book's publication, which reached its frenzied peak in December 1966. Jackie sued my father. The story was international news. I came home from boarding school to find our house in a small Connecticut college town surrounded by TV trucks. The effect of months of stress had my sensitive father sick with the flu. Though he had a fever, he insisted on buying a tree and leading us in trimming it, as he did every year. He was reaching for his beloved Christmas like a lifeline in that impossible time.

His face gray and haggard, he climbed up to place the star on the top of the tree. Howls of agony clashed with the Mormon Tabernacle Choir's rendition of "Oh Come All Ye Faithful," and he staggered from the room with his hands over his face. He had scratched the cornea of an eye. He would wear a patch through the rest of the battle with the Kennedys. The day after Christmas, his flu turned to pneumonia and he was hospitalized.

He survived that Christmas. He settled with Jackie Kennedy that January, and his book was published. The controversy had made him world famous.

On Christmases after that awful one in 1966, I no longer suffered sick anticipation, but dread. My father's fame had ruined my parent's marriage, and with it any sense of well-being in our family. Yet they somehow stayed married, and my two sisters and I continued to come home for Christmas. The tension in that house was excruciating all year round. At Christmas it became unbearable. My body manufactured an escape, much as my father's body had become sick during the height of the Kennedy Controversy.  Every Christmas like clockwork I would come down with the flu and retreat to a couch in another room so I didn't have to sit by the tree and endure all the smoldering looks and hissed conversation.

But there was no avoiding those readings on Christmas Eve. Though my mother daily tortured my father with a torrent of verbal abuse until he mostly sat silent, she couldn't stop him from his readings. Each year they became a little harder to endure, until I sat there wanting to jump out of my skin, waiting for those last words from Luke so that I could slink off. Why were those readings so terrible? It was my father's insistence on maintaining a jovial façade over our disintegrating family. I'll never know, but I hope he got something from his Christmas illusion.

In the spring of his last year, when he knew the end was near, he grabbed for that old lifeline,  briefly considering extraordinary measures in order to "see one more Christmas." Then he realized that even if medicine could force his body to survive that long he would be in no shape to enjoy it.

Now that he's gone and our boys are grown and have left home, my wife and I have happily abandoned Christmas rituals. We don't have a tree. We give presents only if we feel like it. It's nice to light a few candles to celebrate the return of the light. This December 25th we're trying something new. We're going to join some Jewish friends in their Christmas tradition -- a movie followed by Chinese food.

I wish you a Merry Christmas, however you choose to celebrate it.