"True Grit": How does the original stack up? 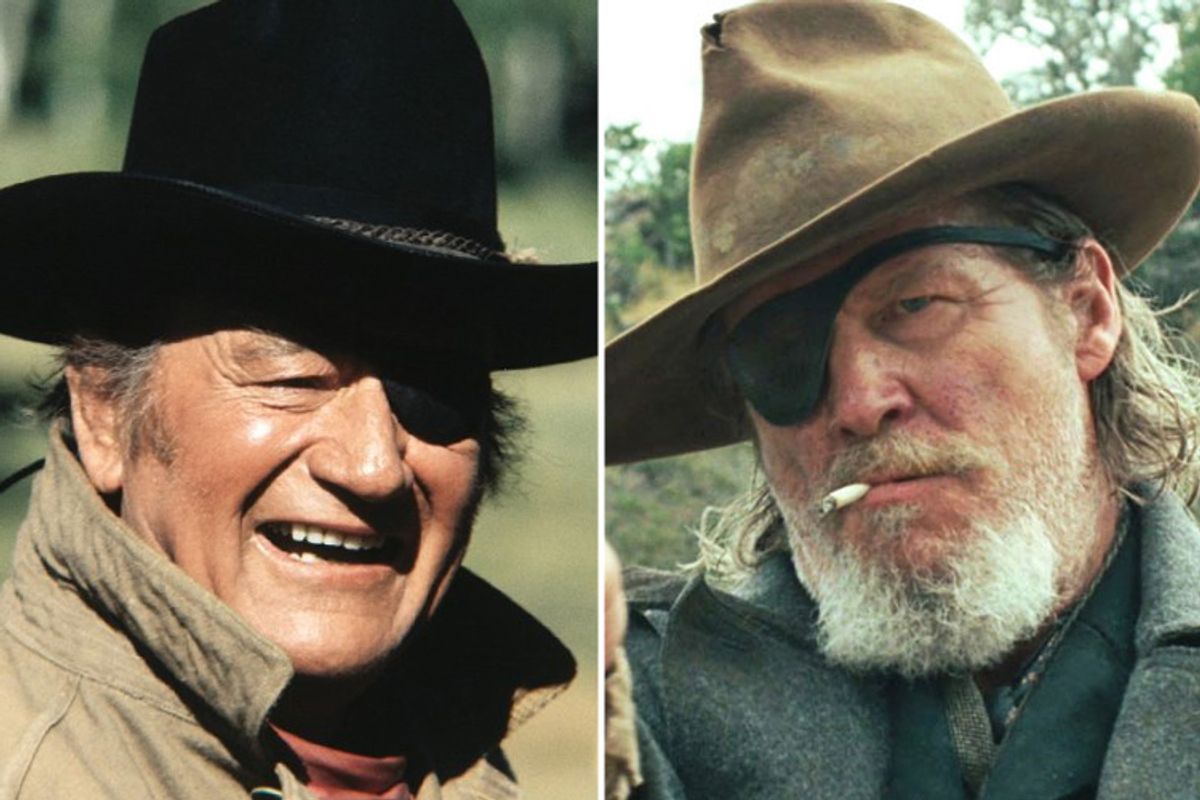 Despite the Coen brothers' claim that they have only vague memories of the 1969 version of "True Grit," there isn't a scene in the trailer for their upcoming remake that doesn't conjure its counterpart from the initial film. The plucky Mattie Ross still plummets into that snake pit, although Hailee Steinfeld (born in 1996) is a much younger Mattie in today's version than Kim Darby, who was a 22-year-old mother when the original was made. That iconic scene of the one-eyed reprobate Marshall Rooster Cogburn riding into a line of bandits with guns blazing is also structurally unchanged. The most noticeable difference between old and new takes is that Jeff Bridges' duded-up 21st century Cogburn opts for two pistols instead of John Wayne's odd pairing of a revolver in one hand and Winchester in the other. The clip where Cogburn is grilled by a haughty defense attorney shows an even stronger resemblance between the two films. Both the Duke and the Dude say, "shot or killed" with a similar cadence.

Possibly the biggest change from the 1969 to 2010 versions of "True Grit" appears to come in the form of facial hair. Bridges sports a face full of whiskers where Wayne refused to add the handlebar mustache that author Charles Portis had envisioned for his character in the original novel.

"Just picture yourself as an actor," Wayne explained in Ronald Davis' "Duke: The Life and Image of John Wayne." "You've got a big hat on. That cuts down part of your expression. Now they put a patch over your left eye. That cuts out more. Now they put a walrus mustache on you. How in the name of God are you going to react so that the audience knows how you're feeling? It was just too much to have all that on." While audience that value Bridges' mug can already see two different versions of it in this month's "Tron: Legacy," Wayne didn't want some writer's vision covering the merchandise that he felt audiences were paying for.

Watching the original "True Grit" again, it's easy to see why Joel and Ethan Coen were drawn to it. The dialogue, mostly taken from the book, is so rich that I practically filled an entire notebook with it before leaving myself at the tender mercies of IMDB. Mattie, the hardheaded girl who hires Cogburn to track the man who murdered her father, refers to Episcopalians as "kneelers." Cogburn tells Mattie that she's "no bigger than a corn nubbin." Cogburn is described as a "notorious thumper" who "likes to pull a cork" by quirky townspeople. As Mattie insists on accompanying Cogburn and the Texas Ranger La Boeuf (country star Glen Campbell) on their manhunt, both men threaten to paddle her rump to dissuade her. However, when La Boeuf finally goes at her behind with a switch, Cogburn says, "Put it down, you're enjoying it too much."

Joining Wayne and Darby are Robert Duvall as the desperado "Lucky" Ned Pepper and Dennis Hopper in a bit part the same year that "Easy Rider" transformed moviemaking itself. It was also a big year for Strother Martin, who went for a classic western trifecta in 1969 with his character roles in "True Grit," "The Wild Bunch" and "Butch Cassidy and the Sundance Kid."  Darby, Jeff Corey, Alfred Ryder and John Fielder are all probably best known for their appearances in various episodes of the original "Star Trek," another Paramount production. Having not yet seen the new version, I can only wonder if the Coens will resist lampooning these characters by giving them the "Oh Brother Where Art Thou" treatment instead of just letting their eccentricities speak for themselves in the way that veteran director Henry Hathaway ("13 Rue Madeleine," "Kiss of Death") did in the first version.

It's tempting to see Wayne's performance in "True Grit" as a comeback, but it's really more of a slight repositioning. The year before "Grit," the Duke got behind the increasingly unpopular Vietnam War by partially directing and starring in "The Green Berets," a film that still turned a profit despite being pounded by the critical equivalent of a deadly mortar barrage (Renata Adler of the New York Times called it vile, insane and dull). Paramount's trailer for the original "True Grit" contained raves (for the novel) from the Times and Life magazine in an effort to let those lefty liberals know that this was a John Wayne movie that was OK for them to like.

Wayne himself played along with his new marketing direction by telling a young Roger Ebert that "True Grit" was his "first decent role in 20 years." Those two decades before the Duke donned that eye patch include his performances in "The Quiet Man" (1952), "The Searchers" (1956), "Rio Bravo" (1959), and "The Man Who Shot Liberty Valence" (1962) -- a set of career highs that few actors of Wayne's barely more than one-dimensional range could ever hope to achieve.

As Rooster Cogburn, Wayne embraced being a fat old man, but this was hardly an about-face for him. Romancing a young Angie Dickinson in Howard Hawks' "Rio Bravo" was the exception and not the rule for Wayne, who had been playing the part of the grizzled patriarch since Hawks first directed him in "Red River" in 1948. Projecting himself as a national father figure with few romantic entanglements gave him unmatched career longevity, a pattern that is now being repeated by Sylvester Stallone as the overly chaste hero of "The Expendables" and the Rocky and Rambo revivals.

But whatever Wayne and Paramount did to redirect critics and audiences from any bad feelings left in the wake of "The Green Berets," it worked. "True Grit" was a box office and critical success and also netted Wayne his only Oscar. That year's best picture winner was the X-rated, gay-themed "Midnight Cowboy," which TCM host Robert Osborne calls "a different kind of cowboy" in the last installment of the documentary series "Moguls & Movie Stars: a History of Hollywood." Wayne still had enough strength to strike a blow for his brand of patriarchy, but he couldn't reverse the changes to the old studio system, which had mostly ceased to exist.

The trailer for the Coen brothers' new version of "True Grit" at times looks like an accidental shot-for-shot remake of the original.

Coincidentally, the thumbnail for this trailer of the original "True Grit" is almost a mirror image of the freeze frame from the current trailer.