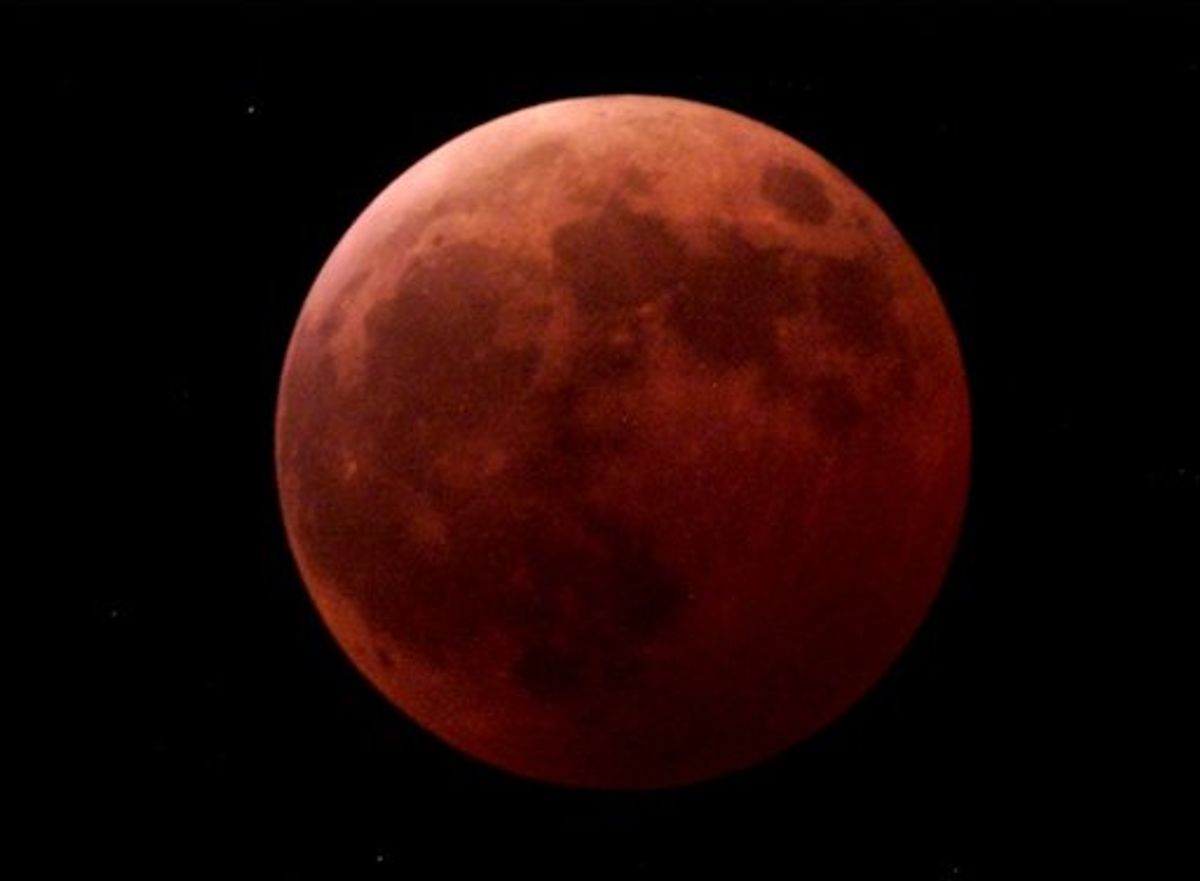 FILE - The moon appears totally covered by shadow as the earth passes between the moon and the sun, during the lunar eclipse in this Jan. 9, 2001 file photo taken in Kiel, Germany. On Tuesday Dec. 21, 2010 the first day of northern winter, the full Moon passes almost dead-center through Earth's shadow. The eclipse begins at 1:33 am EST. At that time, Earth's shadow will appear as a dark-red bite at the edge of the lunar disk. It takes about an hour for the "bite" to expand and swallow the entire Moon. Totality commences at 2:41 am EST and lasts for 72 minutes. According to NASA the last total lunar eclipse that happened on the winter solstice was Dec. 21, 1638. The next one will Dec. 21, 2094. (AP Photo/Heribert Proepper, File) (AP)
--

'Twill be nights before Christmas and high overhead, the moon will turn brown or maybe deep red. The Earth and the sun with celestial scripts will conspire to make a lunar eclipse.

Weather permitting, sky gazers in North and Central America and a tiny sliver of South America will boast the best seats to this year's only total eclipse of the moon.

The eclipse will happen Monday night on the West Coast and during the wee hours Tuesday on the East Coast. Western Europe will only see the start of the spectacle while western Asia will catch the tail end.

The moon is normally illuminated by the sun. During a total lunar eclipse, the full moon passes through the shadow created by the Earth blocking the sun's light. Some indirect sunlight will still manage to pierce through and give the moon a ghostly color.

Since the eclipse coincides with winter solstice, the moon will appear high in the sky -- a boon for skywatchers. With recent volcanic eruptions around the globe dumping tons of dust into the atmosphere, scientists predict the moon may appear darker than usual during the eclipse, glowing an eerie red or brown instead of the usual orange-yellow tinge.

North and Central America should be able to view the entire show, which is expected to last 3 1/2 hours if skies are clear. Total eclipse begins at 11:41 p.m. PST Monday or 2:41 a.m. EST Tuesday. The totality phase -- when the moon is entirely inside Earth's shadow -- will last a little over an hour.

"It's perfectly placed so that all of North America can see it," said eclipse expert Fred Espenak of NASA's Goddard Space Flight Center.

The Griffith Observatory perched on the south slope of Mount Hollywood in Los Angeles will host an eclipse party Monday evening although rain is forecast. Telescopes will be set out on the lawn for the public and astronomers will give free lectures on the eclipse's various stages.

If clouds or rain set in, the observatory plans to stream live video of the eclipse from the Internet. Among the various outfits that will show the eclipse live is NASA, which has a camera mounted at its Marshall Space Flight Center in Huntsville, Ala.

Unlike solar eclipses which require protective glasses, lunar eclipses are safe to watch with the naked eye.

"If you get skunked by bad weather, all you have to do is wait a few years for the next one to come around," Chester said.

There are two total lunar eclipses in 2011 -- in June and December. North America will miss the June show and witness only a part of next December eclipse.