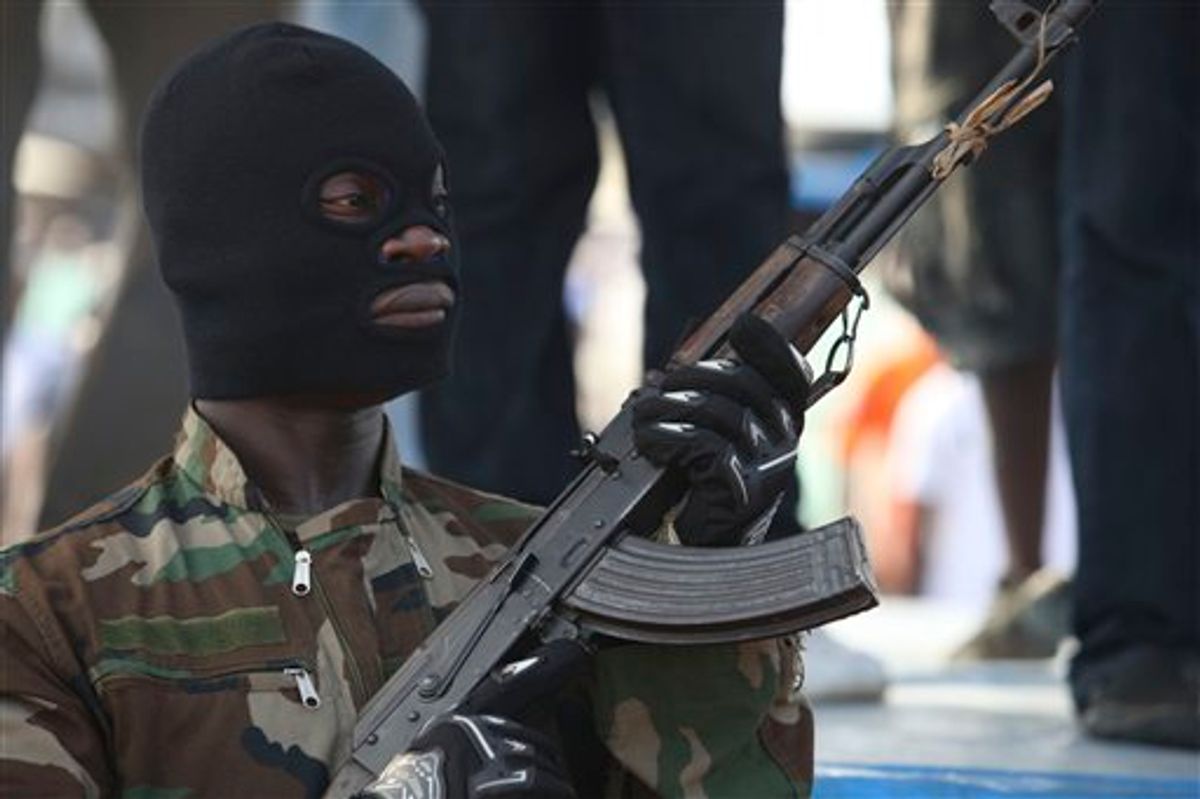 An Ivory Coast soldier stands guard during a youth rally in Abidjan, Ivory Coast, Saturday, Dec. 18, 2010. The man who refuses to step down from the presidency ordered thousands of U.N. peacekeepers to leave Ivory Coast immediately on Saturday, calling the global body that has endorsed his political rival an "agent of destabilization." The move was the latest act of political defiance by Laurent Gbagbo, who maintains he is the rightful winner of last month's runoff vote despite growing international pressure on him to concede defeat. (AP Photo/Sunday Alamba) (AP)
--

(UPDATED - UPDATE II)You're the leader of a small African country facing an international outcry after reversing the results of a presidential election and dispatching your forces to suppress and kill opposition protesters. What do you do to turn the tide and keep your grip on power?

The columnist and former special counsel to Bill Clinton specializes in lobbying for controversial corporate and foreign clients, particularly those seeking Democratic representation in Washington. But even for Davis, taking on Ivory Coast leader and flagrant human rights violator Laurent Gbagbo as a client, as he did this week, seems to cross some kind of line.

Gbagbo, president of the African country since 2000, last month lost what international observers said was a fair election. But instead of relinquishing power, Gbagbo had his allies overturn the election result and has been violently suppressing the subsequent opposition protests. Gbagbo's military police reportedly killed dozens of opposition marchers last week, and scores of people have disappeared in neighborhoods that voted for Gbagbo's opponent -- thought to be the victims of death squads.

Despite what the United Nations calls "massive violations" of human rights, Davis is out spinning harder than ever for Gbagbo. According to CNN, Davis asserted at a press conference Monday that Gbagbo has renounced violence:

"Mr. Gbagbo opposes violence and has authorized me to say he wants a mutual renunciation of violence and calls on Mr. Ouattara to join him on putting the arms down and let's sit down and talk," Davis said.

That does not square with the known facts. Davis has not returned a call seeking comment.

The latest out of Ivory Coast is that Gbagbo has cut off food and medical supplies to the UN peacekeepers that are guarding the hotel where Gbagbo's opponent -- and the rightful victor of the election -- is holed up.

When we last checked in with Davis, he was flacking for the for-profits schools industry. But it turns out that Gbagbo is the second African human rights violator whom Davis represents. Over the summer, Davis signed on for a $1 million per year contract with Teodoro Obiang Nguema Mbasogo, the longtime dictator of oil-rich Equatorial Guinea. Back in June, Davis, declaring himself the Guinean government's "reform counsel," shuttled to South Africa for a press conference at which Obiang reintroduced himself to the world.

A few months later, Obiang was in the news again, accused by Amnesty of subjecting political opponents to "abduction, detention, torture and execution."

UPDATE: Davis' assistant sends over this statement, in which Davis says that his law firm is counseling non-violence and transparency. If that's accurate, there's no evidence that it's working. And there's still no evidence for Davis' claim this week that Gbagbo "opposes violence" -- just the opposite. The full statement:

UPDATE II: An interview on Ivory Coast with Lanny Davis.