Does anyone in America believe in the rule of law?

WikiLeaks, immigration, tax havens, illegal wars: Both the left and right ignore the law when it suits them 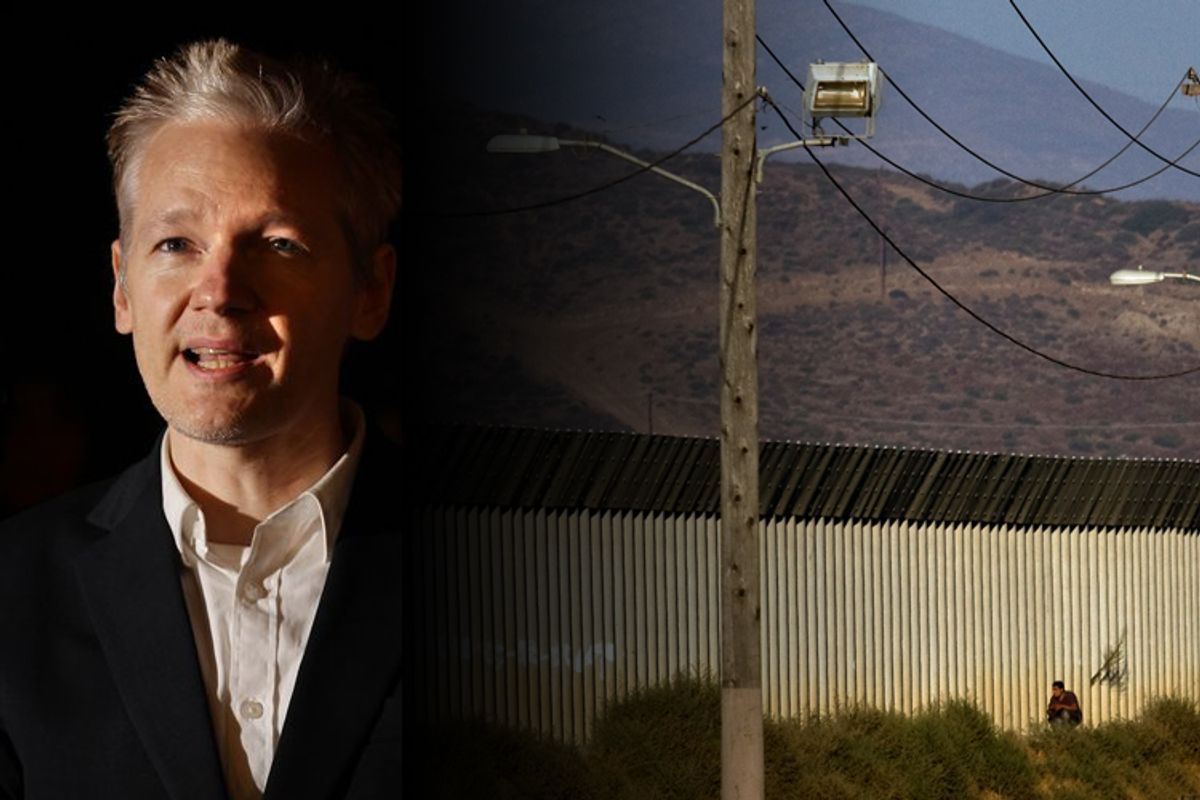 Different ideas about the rule of law in the United States and a certain nation in Latin America were explained to me once by a distinguished professor of law from that country. "In your country, the Constitution and the laws are considered to be binding," he told me with an ironic smile. "In my country, they are considered to be ... aspirations."

Further evidence, if any is needed, that the 21st century U.S. is degenerating into a banana republic can be found from the increasingly casual attitude toward the law that is displayed all across the American political spectrum. Liberals, conservatives and centrists, it seems, all agree that laws are aspirations, not commands. Individuals should be free to selectively disobey laws of which they personally disapprove. What is more, there seems to be a consensus that the American nation as a whole has no obligation to obey the system of international laws that the U.S., more than any other nation, spent much of the 20th century attempting to promote.

Most of the American left has made a hero of Julian Assange, the founder of WikiLeaks. For Assange's admirers, the embarrassment that his publication of stolen government and corporate documents produces for government policymakers, bankers or corporate executives whom they dislike more than compensates for the theft of classified or private information on a grand scale. The idea that the law in its majesty is supposed to protect the bad as well as the good apparently is rejected by those who celebrate information vandalism, as long as its victims are the State Department or big banks.

When it comes to immigration, many progressives have not been content to argue for a path to legalization on the part of many illegal immigrants. Much of the left has attempted to erase any distinctions between legal and illegal immigration -- for example, by denouncing critics of illegal immigrants and the scofflaw businesses that employ them as "anti-immigrant." To read much of the liberal blogosphere, it would appear that immigrating to the U.S. by following U.S. laws, and immigrating to the U.S. by breaking those same laws, are equally legitimate.

Other progressives claim to oppose illegal immigration, but then denounce any measures to enforce immigration law, from border apprehension to workplace raids. But a law that has no sanctions to punish violators is not a law. It is, as the professor would say, an aspiration.

An equally casual approach to the rule of law is found on the right, among libertarians and conservatives who defend the offshore tax havens that defraud federal, state and local governments of tens of billions of dollars in tax revenue each way. Not even their defenders dispute the fact that these tax havens exist only to facilitate tax avoidance by hedge funds, banks and corporations. According to the Government Accounting Office in 2008, in 2007 Citigroup had 427 offshore subsidiaries, Morgan Stanley 273, JPMorgan 50, and Goldman Sachs 29. The "dark matter" of the "shadow banking system" created by these complex law avoidance schemes contributed to the global financial crisis and today's prolonged recession.

Kellog Brown & Root, America's largest defense contractor, avoided Social Security and Medicare taxes for many of its thousands of employees in Iraq by using this dodge. According to the Boston Globe:

CAYMAN ISLANDS - Kellogg Brown & Root, the nation's top Iraq war contractor and until last year a subsidiary of Halliburton Corp., has avoided paying hundreds of millions of dollars in federal Medicare and Social Security taxes by hiring workers through shell companies based in this tropical tax haven.

More than 21,000 people working for KBR in Iraq -- including about 10,500 Americans -- are listed as employees of two companies that exist in a computer file on the fourth floor of a building on a palm-studded boulevard here in the Caribbean. Neither company has an office or phone number in the Cayman Islands.

If liberals who dislike current immigration law have no objection to seeing it flouted, then why should libertarians who dislike taxes object to tax avoidance and tax evasion?

Then there is the political center, symbolized by New York Mayor Michael Bloomberg, one of the leaders of the "No Labels" movement that claims to speak for sensible Americans offended by the extremes of left and right. The New York Observer reports:

According to an extensive review of the mayor's financial records by The Observer, even as Mr. Bloomberg was trying to counter the loss of taxes and other income from the richest New Yorkers, the foundation he controls was in the process of shuttling hundreds of millions of dollars out of the city and into controversial offshore tax havens that would produce nothing at all for the city in terms of tax revenue.

By the end of 2008, the Bloomberg Family Foundation had transferred almost $300 million into various offshore destinations -- some of them notorious tax-dodge hideouts. The Caymans and Cyprus. Bermuda and Brazil. Even Mauritius, a speck of an island in the Indian Ocean, off the coast of Madagascar. Other investments were spread around disparate locations, from Japan to Luxembourg to Romania.

'I've never seen anything like it. It's about as opaque set of investments as you can find,' said Rich Cohen, who covers foundations and charities for Nonprofit Quarterly.

The problem is not limited to elite Americans who feel no shame about avoiding taxation or exploiting illegal immigrant workers instead of hiring American citizens and legal immigrants. America is turning into not only a nation of scofflaws but also a scofflaw nation.

In the 1970s, in the aftermath of Sen. Frank Church's exposure of CIA abuses in congressional hearings, the use of assassination as a tool of foreign policy by presidents was outlawed. And yet President Obama, like Presidents Bush and Clinton before him, routinely uses drones to engage in remote assassination of suspected terrorists in countries with which the U.S. is not at war. The justification is not that the individuals necessarily have already committed a crime, but that they might commit one. We are in the world of "Minority Report," with its "precrimes."

The same rationale that the rule of law is an impediment to national security accounts for the lack of punishment of all but a few of the individuals, from President George W. Bush on down, who were involved with systematic torture of prisoners and suspects in the "war on terror." It is saddening to remember that the United States government partly inspired the Geneva Conventions, with Francis Lieber's code of military conduct during the Civil War, commissioned and adopted by the Lincoln administration. Today in the 21st century we are less civilized than our 19th-century predecessors. To judge from the popular and elite silence on these issues, it appears that 21st-century Americans accept the torture of suspects, or execution with trial, or permanent detention without charges, in the case of individuals who might be -- not necessarily are, but might be -- dangerous at some point in the future.

Then there is preventive war. Along with pioneering the rules for fair treatment of prisoners, the U.S. insisted on international adoption of the U.N. Charter, which embodies a norm against any wars other than strictly defense wars. International law permits countries to "preempt" imminent attacks -- for example, by destroying missiles about to be launched. But countries are not allowed to prevent possible, purely speculative future attacks -- for example, by bombing nuclear facilities that might be used years from now to produce nuclear weapons that, in turn, might, just might be used against the U.S. or one of its allies. Under post-1945 international law, it would have been legal for the U.S. to sink the Japanese aircraft carriers that were about to attack Pearl Harbor, but not for the U.S. to attack Japan in 1920, on the theory that Japan might, just might attack the U.S. in a couple of decades.

The 65-year-old prohibition of preventive war appears to have been abandoned by modern American statesmen of both parties. George W. Bush justified the Iraq war, and Congress voted for it, as a preventive war to stop Saddam Hussein from obtaining weapons of mass destruction that he might or might not use or give to terrorists at some indefinite point in the future. Today American foreign policymakers and journalists frequently discuss the pros or cons of "taking out" Iran  's nascent nuclear capability, on the shared assumption that the decision should be made on prudential, rather than legal, grounds. But it's not a question of prudence. It's a matter of law. The distinction between preemptive war, to forestall imminent attacks, and preventive war, to avert purely speculative future dangers, seems to have been abandoned.

In each of the cases I have mentioned, the defenders of lawlessness on the part of individuals or the nation as a whole can make a case for an exception to the rule that laws ought to be obeyed until they are changed. Yes, the defenders of Julian Assange might say, it is wrong to declassify government documents -- but WikiLeaks lets the public know more about decision-making in American foreign policy, and that's a good thing. Yes, progressives might argue, illegal immigration is undesirable -- but illegal immigrants' violation of U.S. laws is outweighed by the improvement in their lives (to say nothing of the benefits for the Democratic Party if the amnestied law-breakers vote for the Democrats). Yes, say the conservatives and libertarians, tax avoidance in general might be a bad thing -- but, on the other hand, the U.S. corporate income tax is too high. Yes, say the foreign policymakers of both parties, we disapprove in principle of torture and extrajudicial murder -- but don't you want us to prevent another 9/11?

The problem with this kind of reasoning is that if too many good reasons are found to justify refusals to obey or enforce too many laws, respect for the system of laws as a whole will erode. In "A Man for All Seasons," the playwright Robert Bolt made this observation through the character of Sir Thomas More. The British chancellor replies to a character who is shocked that More would allow even the devil the benefit of the rule of law:

"What would you do? Cut a great road through the law to get after the Devil? ... And when the last law was down, and the Devil turned round on you -- where would you hide, Roper, the laws all being flat? This country is planted thick with laws from coast to coast, Man's laws, not God's, and if you cut them down -- and you're just the man to do it -- do you really think you could stand upright in the winds that would blow then? Yes, I give the Devil benefit of law, for my own safety's sake!"