The day my neighbor leapt in front of a train

Last week, Ryan Devaney killed his mom and stabbed his dad. I wonder how often I passed him without ever seeing him 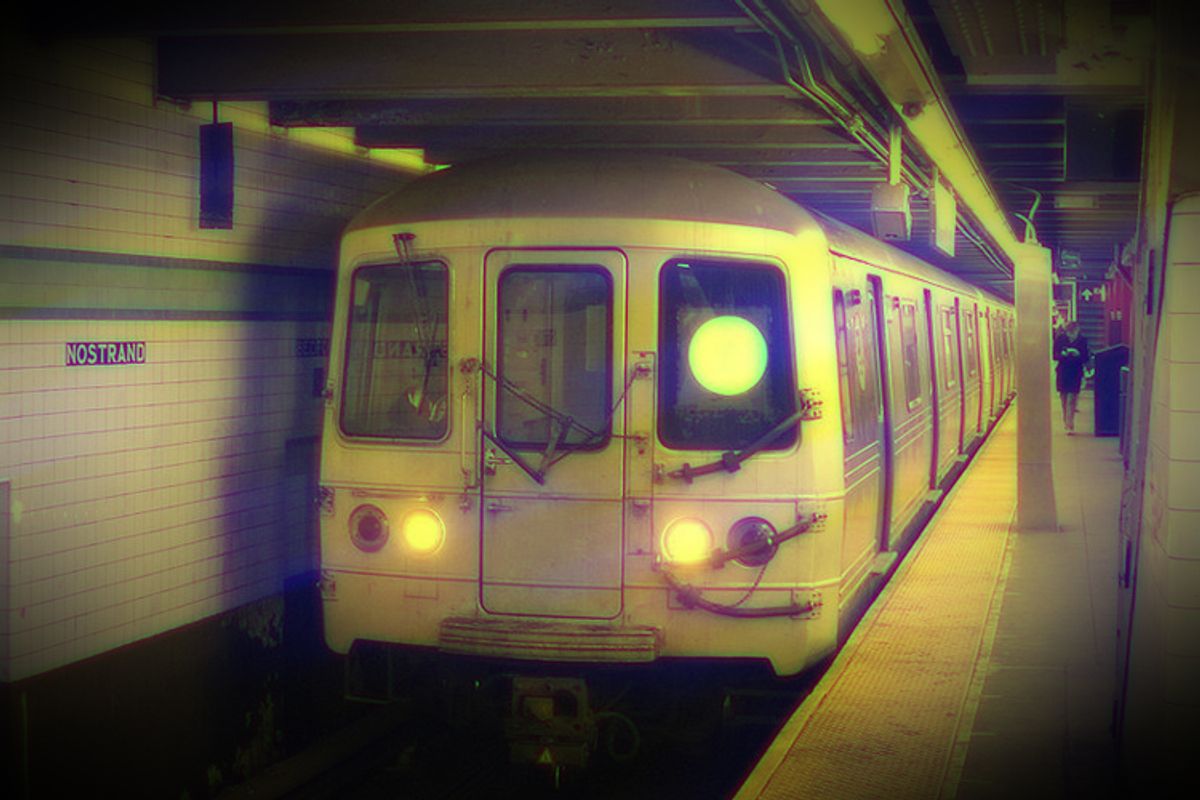 While at work Monday, Dec. 13, I got a text from a friend in my Brooklyn, N.Y., neighborhood I hadn't spoken to in months. "Some dude on Howard Place killed his parents then jumped in front of a G train," it said.

I assumed this was some angst-ridden teenager, but it turns out the dude, a mentally disturbed man named Ryan Devaney, is just a year older than me -- 31. His mother, who had been stabbed in the eye and abdomen, was declared dead on arrival at Methodist Hospital in a section of Brooklyn to which I have driven many times. My friend wasn't entirely accurate in his description, however: The father, despite two stab wounds to the neck, was expected to live.

The only photo of Ryan in the news shows him standing straight, looking defiantly, if a little blankly, into the camera. He's a big guy, with the bulk of a linebacker. I don't know him, though considering how close we live to each other, how much he looks like the guys I grew up around, it might be more accurate to say I never noticed him. I must have passed him hundreds of times.

Howard Place in the Windsor Terrace section of Brooklyn is a block I have walked down all my life. Its houses have nice enclosed porches that I have always envied, where a person could sit in perfect privacy, enjoying, I imagine, a cold beer. The photo of Ryan appears to have been taken in a home, and I wonder if it's his family's home, the basement of which was given to Ryan as his own apartment. Such a gift may not sound so generous, but in fact these basements could just as easily be called garden apartments. My parents gave the basement of our house to me when I turned 15, at which point it became my haven, my cave. The windows peek out onto the street like a hiding kid's eyes from behind a sofa. I've since moved to the upstairs apartment under pressure from my mother to live a more adult life.

Maybe it's not surprising I don't recognize Ryan. I'm not much of a neighbor. There's an elderly woman who has lived up the street from me for my entire life to whom I've never said a single word. Countless times I've listened to the piano music that wafts from her windows, or passed her smoking in front of her house, or carefully sweeping her stairs. It's only from reading stories about the incident that I learn the name of the lady who runs the corner store, famous for calling everyone "love." She's quoted in the news saying that Ryan often wandered into the store late at night looking high. I think about how many times I've walked into that same store looking completely out of it, never saying hello to anyone, and standing for strange amounts of time in front of the beer selection. I wonder what she would say about me if I had been the one who attacked my parents with a 4-inch kitchen knife. Would she consider it inexplicable that a good boy like me did a heinous act like that? Or would she shake her head and sigh and say how she'd seen it coming all along?

This isn't the first time there's been a gruesome act in the neighborhood. In 2008 the grandmother of the family who runs the dry cleaner at the top of my block was strangled to death in her shop after hours. Her son arrived the next morning and saw her feet sticking out of the bathroom doorway. Hair that was not her own was found in her hands. Locals covered the store gate with flowers. The shop was reopened a week later, a row of creased slacks having resumed their place in the window. But Ryan's jump in front of the G train only shut down service for an hour. Commuters, by all accounts, were infuriated.

The G train is one of the city's least ambitious trains, the only one in Brooklyn that doesn't enter Manhattan, wandering off desultorily toward Queens, making fewer stops than most trains and suffering more mechanical failures than any. Ryan jumped just before 8:30 a.m., after a short walk from his house to the subway entrance. On his way he mumbled to a concerned neighbor that he had done "something bad." I didn't get to the train until 9:45 that morning, when few traces of the incident remained, but a lifetime of standing on that platform allows me to say what it would have looked like at that time: people standing behind columns in furry hats, a person per column, and sometimes one or two in between, their eyes going back and forth between the darkness of the tunnel and the people trickling by. There would have been witnesses, lots of witnesses, and many of them -- particularly those standing behind Ryan on the platform -- would have been well positioned to see what happened. So it's weird that so far none have been quoted in the papers. I can only assume that they would prefer to forget what they saw.

It's often occurred to me -- standing on a subway platform as a train dives into the station -- that I am not safe. An outstretched limb, or a bump from a rushing stranger, and someone could surely be killed. We live, among other places, on the point where the city meets its people, where those possessed by bravura strut their invincibility with little but rushing air between them and the incessant progress of the city. One of the most memorable things I learned in elementary school was the purpose of the textured yellow stripe that runs along subway platforms: so that a person who can't see can still feel the point at which he is in danger.

It goes without saying that killing yourself by jumping in front of a train is not a "cry for help." It almost seems, to me, a statement about the city's relentless momentum. To let the city itself crush you, to feed yourself into the grinding gears. But Ryan didn't kill himself; he actually lived. Perhaps he twisted in midair at the last moment, or jumped too late. He's in a hospital bed now, as I write this, his wounds a long way from healed, maybe not sentient enough yet to realize what he's done, that he will be charged with the murder of his mother and the attempted murder of his father as soon as he is able to comprehend his rights.

On Tuesday night I sat in a bar in Bay Ridge, Brooklyn, with my girlfriend, shouting about what had happened over death-obsessed '90s rock: Rob Zombie and Slayer. I talked about the feathers that had reportedly burst from Ryan's down jacket upon contact with the G train, about Ryan having once threatened to cut off his father's fingers, and about the screaming fights the neighbors had been overhearing (which made me wonder about the thinness of my own walls). The bartender knocked on the bar and refilled my glass with Jameson. We shouted at one another some more, imagining what this must be like for Ryan's father. Would Raymond Devaney, through a layer of Plexiglas, forgive his son? Would Raymond blame himself? I look around at the men in the bar sitting with beers as they gaze up at televisions. Raymond Devaney is a well-known elevator repairman, and if he weren't on a bed at Lutheran Hospital right now, it is not unthinkable that he could be here, unwinding after work. I think about how the lives of those around us always look so normal, so untroubled, and how naive that is.

I had a dream recently in which a person was lying on the subway tracks and I was the only one around to help. I think I've had this dream before. In it I jump down into the tracks and try to move the person, but the body is heavier than it looks. The person is indistinct -- male, female, my skin color, another -- just a dead weight that I cannot budge. A light appears in the darkness of the tunnel, approaching with the train's double-time syncopation, but I can never remember what happens next.

When I get home from work around 8 o'clock on the night of the incident I walk along the edge of the platform looking for feathers, or for blood, for anything that will mean what has happened has happened. Instead, I see a pair of headphones, not the sleek Apple kind but bigger fuzzy '90s ones. Candy wrappers and soda cans and white pizza plates look like they've been there since my childhood. I get to the end of the platform and rats scatter from a pile of garbage bags. I stumble backward, reach for a column. A train is coming -- barreling, with all its bluster, into the station.

Up on the street again I walk across Howard to get the Christmas wreath I have bought for my mother from my car. The first frost of the season has given to the street occasional glistening white patches, an unthorough kind of snow. The air itself is complete in its coldness.

Parked in front of the house, No. 21, is a squad car with a cop inside who looks at me with equal parts indifference and hostility. The stoop's cordoned off with an excess of yellow caution tape. Inside the house the lights are on -- a soft and easy kind of yellow, with Christmas lights blinking around the window frame, cozy and inviting.

I want to talk to the cop -- to say I am a local writer and to ask about the condition of the perp -- but I don't. I'm not a real reporter. I'm just someone who lives here, who has always lived here. I walk toward my house, strangely eager to ask my mother if she's heard the news. I pull my scarf up around my face so that even the strangers I've known all my life won't recognize me. But there's no one around, only a little piano music faintly playing. I walk down the middle of the street, as if that's where I belong, happy, yet again, to come home to this place.

Mac Barrett is a freelance writer and associate producer for CUNY TV. His fiction, poetry and reviews have appeared in The Brooklyn Rail, Salt Hill Review, Hanging Loose and on WBAI.