Playing a server on reality TV, she shows the kind of courage and competence that marks all of her endeavors 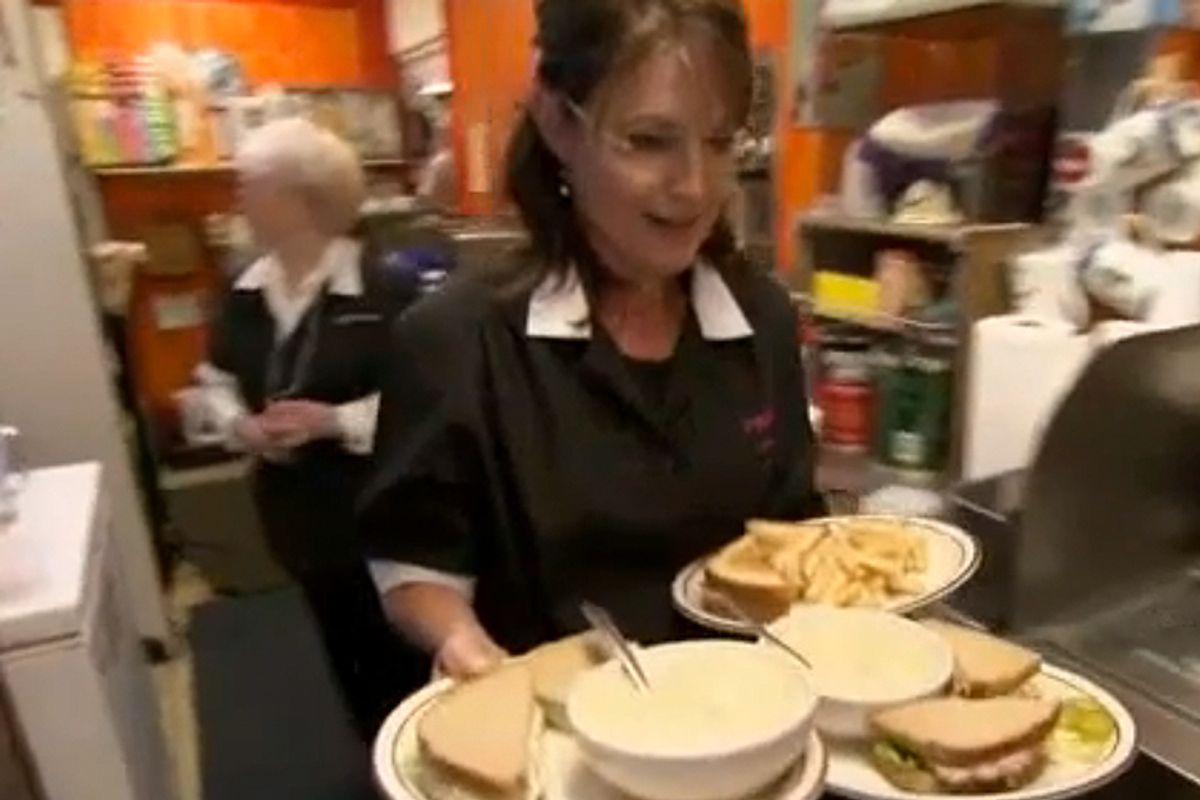 Oh, Sarah, Sarah, Sarah. I try not -- as a member of the lamestream media liberal elite -- to write about your opinions on food, and so I let others take issue with how you let your weird knee-jerk hatred of the Obamas take you down the path of giving away cookies in schools just to rub Michelle's nose in our collective portliness.

OK, so I'm lying a little. There is no way I would subject myself to watching "Sarah Palin's Alaska," if only because I can't deal with my jealousy at her incredible savvy. I mean, the lady is getting paid for someone to show an entire series' worth of campaign commercials for her? Argh! Why did I have to fall off the turnip truck?

But when our friends at Eater intrepidly found and posted the clip in last night's episode where dear leader Sarah becomes dear waitress Sarah and mangles the noble profession of table service, I had to take a peek. Won't you enjoy it with me?


Watch the video at Eater.com

0:17 Holy cow, is the Queen of All American Patriots driving a Toyota? Probs she can't bring herself to buy GM because of all that socialist bailout action.

0:56 Palin: "If there are tourists in there who want to meet you, Piper, I want you to be gracious and patient."

Piper: "But you have to bribe me."

OK, 1) Piper is adorable. 2) Piper has superb political instincts. Are they nature or nurture? But I should probably stop talking about Palin's kids; I mean they're off limits, right?

1:30 "This is where she makes her famous pies. I feel like I'm in a sacred place, sacred ground!"

OMG, I have something -- something huge -- in common with Sarah Palin! I think my favorite bakeries are sacred ground too! We worship at the same pastry altar. It's just that I don't try to insist that my pie maker should be your lord and savior too, but now I'm just quibbling.

1:59 Palin: "I wanted to show Piper what it's like to be on your feet all day and work extremely hard and wait on other people." A few seconds later, she tells the camera, "We had a few extra minutes, so I put on an apron." Probs there's a difference between being on your feet "all day long" and doing it during your "few extra minutes." But Sarah's not the type to quit before her shift is over, is she?

2:15 Palin coaches Piper through taking a man's order, a man who is sitting intently and looks so hungry he's about to eat his soda cup. He may or may not be amused by the fact that his chicken fried steak is becoming a matter of national TV entertainment, but I gotta say, watching a mom be cute with her daughter warms my heart every time. Probs this says more about my biological clock than you need to know.

2:22 … and here comes Palin with her first plates! To be fair, the plates are big, the kind of thick ceramic favored by diners, and they are loaded with food. So they're heavy, and precariously balanced in her arms. But the poor woman has a look of abject terror on her face, like she's walking on a high wire with sharks below. A moment later, she's standing at the service station, befuddled at the takeout container in her hands, asking the other servers how they do this all day long. And then she's chatting with customers, before catching herself, saying, "I guess waitresses don't normally introduce themselves, make conversation. They just work." Yes, they work really, really hard.

2:49 But then, a voice calls from the kitchen: "Sarah, order up!" As a server, that is the voice that cannot go unheeded. That is the voice of food dying in the window. That is the voice of a cook who is watching their sweat and their own hard work go away, forever. And Palin picks up a magazine to sign an autograph. Piper says, "Mom's doing horrible as a waitress. I wouldn't tip her because she's spending too much time at the tables talking." Piper Palin, 2012!

The subject of tips comes up. "I don't know if I'll be collecting any tips at the rate I'm going," Palin says, her hands shaking, and I, honestly, feel for her for a moment. I've been there, crashing and burning on the service floor and just watching the entire universe call you a loser. When you get to that point, you don't care about the tips anymore. You just don't want to keep ruining everyone else's day. But happily for her, someone slips Piper some money for her mother's campaign war chest/tip jar.

Finally, the "few extra minutes"-long nightmare is coming to a close, and Palin is in a reflective mood. "Piper had a good day," she says. "She saw what hard work is all about. And tolerance for other people and what it means to be truly of service to other people. Now, where's my check, and what do the polls say?" OK, she didn't say the last part. Out loud, anyway.