The best thing that ever happened to the right

Just two years ago, conservatism seemed destined for history's dustbin. Then Barack Obama was sworn in 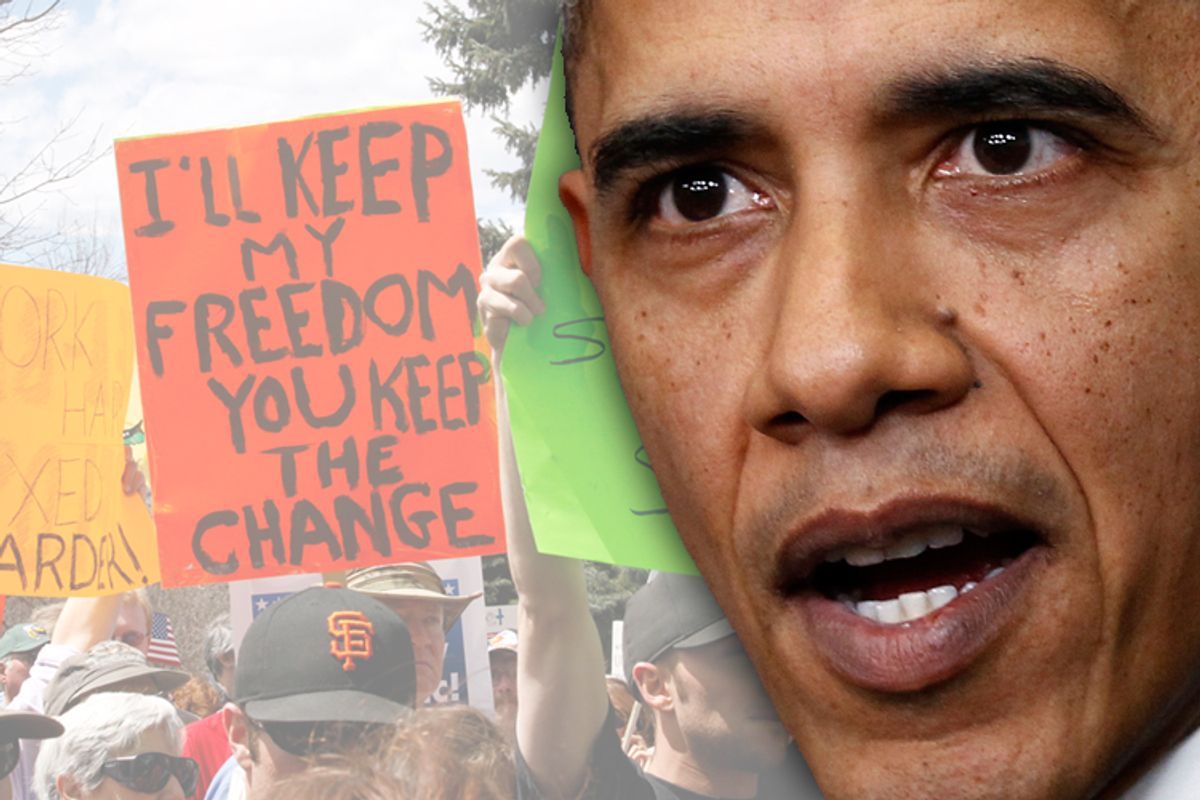 When President Obama started his term in the White House in January 2009, many experts wondered whether conservatism would survive. Following almost three decades of conservative politics in the United States, the movement confronted a serious political crisis. With the collapse of the economy and a troubled war in Iraq, many of the ideas of the right -- such as deregulation and tax cuts -- seemed discredited. President Bush appeared to have become to conservatism what Lyndon Johnson had once been to liberalism, a symbol of the failures and excesses of a political era. Sen. John McCain’s lethargic campaign also revealed a vacuum of leadership within the GOP at a time when the divisions among conservatives were greater than the ideas that united them. In December 2008, the blogger Andrew Sullivan wrote that the "dreadful incompetence" of the Bush administration had "poisoned the Republican brand for more than one generation ..."

Yet it is fair to say that one of the major stories of Obama’s presidency has been the revitalization of conservatism. Within only two years, Republicans have regained control of the House of Representatives through a dramatic midterm election. There are now an abundance of Republicans, some old (Newt Gingrich) and some new (Paul Ryan and Sarah Palin), who are jumping over each other to campaign for president in 2012. Republicans have been able to join hands, despite their differences, by using President Obama as their foil. The president has filled a similar role as communism did during the Cold War. Perhaps most troubling to liberals, President Obama has been unable, and in some cases unwilling, to dismantle pillars of Bush’s policies. The extension of the Bush tax cuts was a major victory for conservatives, even as they gave way on unemployment benefits.

It is too easy to say that pundits simply exaggerated the crisis of conservatism. The problems facing the right toward the end of Bush’s presidency were very real and their ability to rebound was not inevitable.

The first, and most obvious, factor behind the success of the right in recent years has been the stagnant economy. Poor economic conditions generate anger within the electorate. That unrest offered the right an opportunity to tap into opposition toward the president. They were also able to use the stagnant unemployment figures to raise questions about the effectiveness of Obama’s policies. Everything looks worse when seen through the prism of a 9.5 percent unemployment rate.

The second factor has been the ability of conservatives to pursue a strategy that the right had perfected since the 1970s: the combination of elite, organizational movement-building and grass-roots activism. Organizations such as Freedom Works have provided funding and offered organizational leadership to conservatives when they were demoralized. When grass-roots opposition emerged to President Obama’s healthcare plan these Washington-based organizations quickly moved to nurture the opponents and provide them the resources that they needed to make sure their anger did not dissipate. Unrest turned into a political movement.

The third factor was the fact that the conservative movement built an incredible infrastructure to propagate its ideas. The conservative movement never depended on any single president for its success. Since the 1970s, its goal had been to institutionalize conservative ideas to shift public debate to the right over the long-term and to offer a counterweight to liberalism even when there was a Democrat in the White House. The infrastructure included media outlets such as talk radio and Fox television. More recently conservatives have moved into the blogosphere with the creation of websites such as Breitbart.com and the Daily Caller. Conservatives, with the help of wealthy philanthropists, have relied on think tanks such as Cato and Heritage that have continued to produce slick and polished policy briefs in support of a conservative policy agenda. The right has used this infrastructure to paint President Obama as left-of-center, even a socialist, at the exact time that he was angering liberals with his ongoing compromises.

The final factor behind the rebound of conservatism has been its mastery of the legislative process. Congressional politics has proven to be one of the greatest sources of strength for conservatism. During the early 1980s, then-Rep. Newt Gingrich headed the Conservative Opportunity Society in the House, which used floor speeches and ethics investigations to weaken the entrenched Democratic majority. COS pressured Republican leaders like Robert Michel of Illinois to stop compromising with Democrats and play closer attention to the conservative movement. Once Republicans took over Capitol Hill in 1994, they used their base of power in the House and Senate to tie up the Clinton administration with investigations and block any efforts to push for expansive domestic legislation like healthcare. When President George W. Bush was in the White House, Republicans used their legislative power to aggressively push for their agenda, blocking Democratic participation in hearings and floor debates. When there was not enough support for the costly and regressive tax cuts in 2001, the GOP used the reconciliation process to avoid a filibuster and "sunset" rules to overcome rules about cost. Since Democrats took over Congress in 2006, Republicans have remained generally united in Congress even as their programs remained unpopular and the enthusiasm of voters moved toward the Democrats. Sen. Mitch McConnell has been one of the silent architects of the conservative resurgence through his ability to keep Republicans in line. At the height of Obama’s popularity shortly after his election, almost all of the Republicans stood firm in voting against Obama’s economic stimulus.

While most experts thought that 2008 would usher in a new era of progressive politics, the reality has been that conservatism has seemed to enjoy the greatest boost. With all the comparisons to Presidents Roosevelt and Johnson, Obama has struggled through a similar experience as Jimmy Carter, who witnessed the rise of a conservative movement during his time in Washington.

The big question for the right is what happens next. Now that Republicans will control the House and will soon have their own candidates on the campaign trail, the ideas of the right will come under the harsh glare of the media spotlight. Speaker-to-be John Boehner will also have to avoid divisions within the GOP from emerging in the next few years as the party starts making choices about where to focus their energy as a majority in only one part of government. During the lame duck session, President Obama demonstrated that he still has the capacity to squeeze legislation out of Congress and that he can find ways to win some Republican suppport, while Republicans finally started to reveal some cracks during the votes over the repeal of "Don’t Ask, Don’t Tell" and the START Treaty. As parts of the healthcare programs go into effect, some provisions might prove more popular than Republicans expect. Finally, the big unknown is the economy. Should recovery be underway in 2012, President Obama will receive an enormous boost going into 2012.

Nonetheless, most on the right and left agree that conservatives are in much better shape than anyone would have imagined two years ago. This is a story that not many people had predicted, and one that Democrats certainly didn't want in the history textbooks.

Julian E. Zelizer is the Malcolm Stevenson Forbes, Class of 1941 Professor of History and Public Affairs at Princeton University and a fellow at New America. He is the author and editor of numerous books that examine U.S. political leaders, policies, and institutions since the New Deal. His most recent books are Jimmy Carter, Arsenal of Democracy, and Governing America: The Revival of Political History. He is also a weekly columnist for CNN.com.