Take a bow, Nancy and Harry 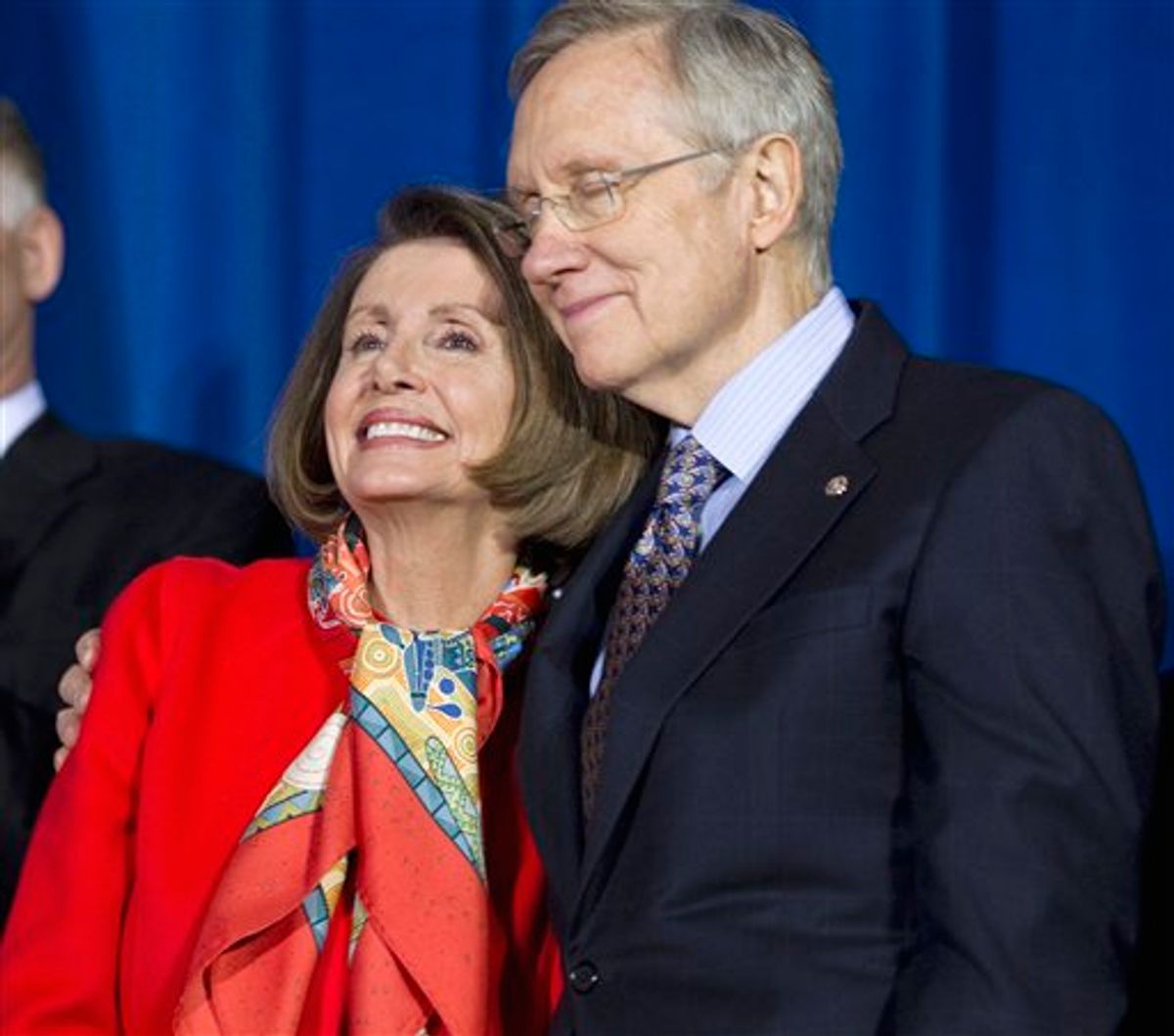 With dozens of defeated and retiring members clearing out their offices, the 111th Congress finished work this week. Few are sad to see it go. According to a recent Gallup poll, only thirteen percent of Americans approve of the way Congress is doing its job; fully 83% disapprove, the most intense scorn for the national legislature in three decades. The Congressional leadership has fared little better: Promising to "fire" Speaker Nancy Pelosi, Republican insurgents seized control of the House last month, while Senate leader Harry Reid clung to his seat against all odds, thanks to the extreme behavior of his Nevada opponent. It seems they can’t get out of town too soon.

Yet the flurry of activity this past week completes the work of the most effective Congress in a generation, one that has passed more historic legislation and transformed the American political landscape more than any since the 1960s. Like the Great 89th, the Congress that Lyndon B. Johnson swept into office with his 1964 landslide, this session re-wrote many of the fundamental rules of American life: eliminating barriers to full participation of gays and lesbians, subjecting the financial sector to regulatory oversight, and constructing a national health insurance program. And like its celebrated Johnson-era predecessor, this Congress has received little thanks for its achievements.

In the short term, the historical record suggests, the nation recoils against far-reaching change; it’s not unusual for the most successful Congressional majorities to lose seats in the next election as the American people collectively utter a breathless, “wait a minute.” But, if the lessons of the 1960s offer any guide, the brick-by-brick accretion of significant legislation can construct enduring new features of the political system.

When the 89th Congress completed its work at the end of 1966, it left behind the most productive law-making record in American history. Lawrence O'Brien, LBJ's chief Congressional liaison, and Domestic Policy Chief Joseph Califano proudly produced a summary of the legislative achievements for their boss (and the national press). By any standard, their list was staggering. The Voting Rights Act shredded the last vestiges of formal, legal segregation, giving rise to a generation of black officeholders (and paving the road for the eventual election of an African American president). Medicare and expanded Social Security rescued millions of older Americans from poverty and illness and became cherished pillars of American social policy (opposing "ObamaCare" last year, even Republicans railed against cutbacks in Medicare). Through the Elementary and Secondary Education Act (ESEA), federal dollars began flowing into public schools. And even if ESEA never became the "passport out of poverty" that LBJ imagined it would, it transformed American schools and laid the foundation for all subsequent education policy.

The Congress of 1965-66 secured not only the civil rights, health, education, and welfare measures commonly associated with Johnson’s Great Society, but a host of other reforms too. The Immigration Act of 1965 eliminated the odious quota system which first became law amidst an outburst of racist nativism in the 1920s. The national origins system, as it was called, had severely limited immigration from Eastern and Southern Europe and all but blocked arrivals from Asia. The new law banned ethnic quotas and opened the doors to a steady stream of arrivals from Asia, making possible the large migrations of Koreans, Filipinos, Japanese and Vietnamese to the United States that have contributed so much to the nation's economic and cultural life.

The current Congress has amassed a record nearly that impressive. It passed controversial legislation to stabilize the financial sector, bail out the automotive industry, and stimulate the sluggish economy. Lawmakers enacted landmark health insurance reform, realizing a legislative goal frustrated since the 1940s, re-regulated Wall Street, compromised on a major tax bill, and passed the Ledbetter Fair Pay Act. In the waning days of the lame duck session, the leadership scraped together bi-partisan majorities to repeal “Don’t Ask, Don’t Tell” and ratify the most significant arms control treaty since the end of the Cold War. Unlike their 1960s forbears, who reserved the filibuster for extraordinary measures and did their legislative horse-trading in private, Reid and Pelosi accomplished all this against a determined opposition and in the glare of 24-hour press coverage. For better or worse, their legislative achievement is remarkable.

In 1966, Johnson’s legislative staff and the leadership on Capitol Hill took justified pride in their accomplishments. But, much like last November, the voters balked at the pace and direction of change. In the mid-term election, the Democrats lost 47 House seats; the informal liberal majority took a harder hit, as most of those losses affected progressive northerners (conservative southern Democrats, still a large part of the party’s caucus, held their own). The Democrats also lost three seats in the Senate, where renowned Illinois liberal Paul Douglas, architect of many anti-poverty programs, met defeat.

More important, popular support for government eroded badly over that two-year period. Public confidence had climbed through the early 1960s, reaching its record peak in 1964 when seventy-six percent of Americans agreed that they could “trust the government in Washington to do what is right” just about always or most of the time. The next two years witnessed a catastrophic drop in that index, the start of a long-term decline that has never fully recovered.

Of course, just as they would in 2010, developments far from Capitol Hill damaged the reputation of Congress in particular and government in general. Much like lingering unemployment and economic distress this past November, the escalating war in Vietnam and racial conflict in the nation’s cities turned voters against the politicians in power.

But despite those setbacks, the legislation of the Great 89th became part of the fabric of American public life. Medicare is virtually untouchable, almost a birthright for contemporary senior citizens. Immigration from the non-Western world has changed the face, and the faces, of the nation. Federal aid to education, and even supervision of it, wins bipartisan support. When ESEA came up for renewal, conservative Republicans were among its champions.

It’s too soon to tell, but a generation from now the work of this most unloved Congress may also have permanently altered the nation, transforming institutions and altering Americans’ basic expectations about their government. Future generations may look back on this Congress with more fondness, and certainly with more respect, than we contemporaries.

Bruce J. Schulman, the William E. Huntington Professor of History at Boston University, is the author of "The Seventies" (DaCapo Press).