The comic turned bestselling dating author on what ladies misunderstand about men, and who really has all the power 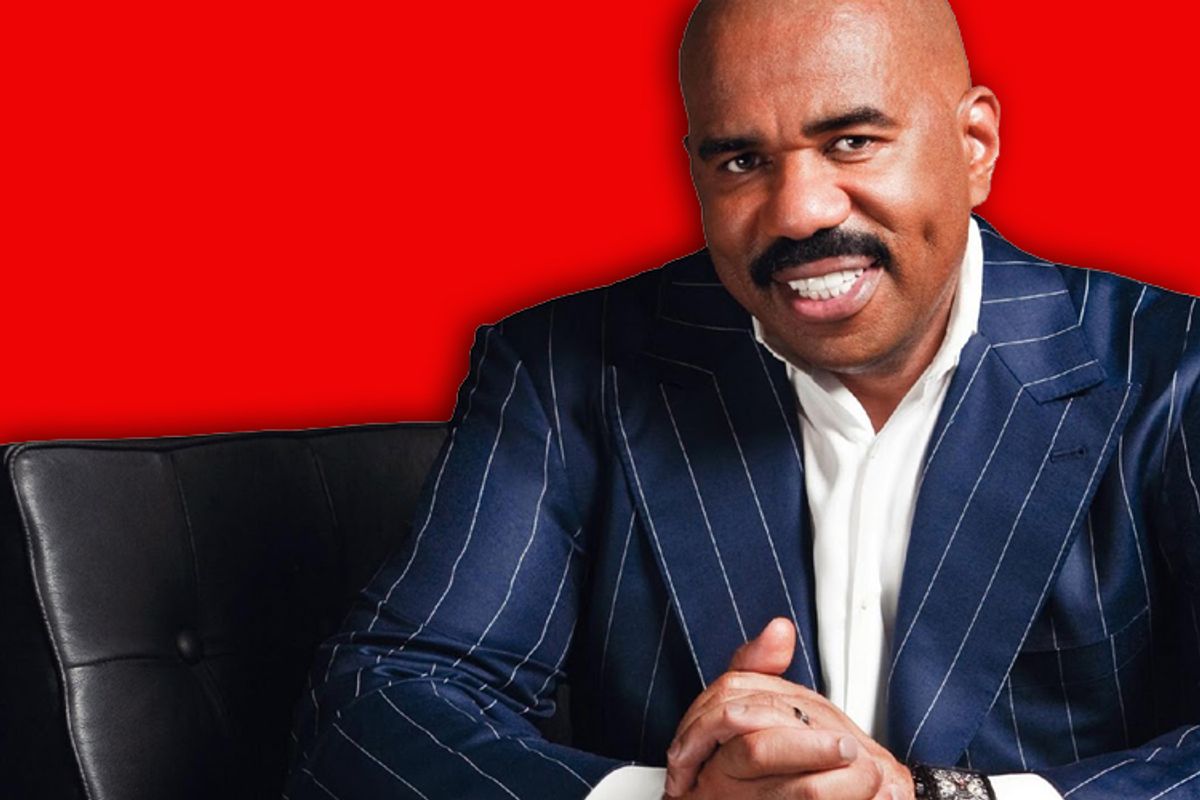 Recently, a young woman was trying to decide between marrying a man for sex and marrying a man for his financial stability. She wrote a letter to Steve Harvey and Shirley Strawberry, who co-host a popular segment on "The Steve Harvey Morning Show" called "Strawberry Letters," hoping to get some guidance. Steve's reply? "Your crazy ass, sitting here talking about 'the other guy'... make up your damn mind! You either want a real man, or you want an animal ... You could have just picked one, but you cain't, because you triflin'."

Steve Harvey has long been a successful comedian and radio personality, but his career really took off when he began dispensing no-holds-barred relationship advice. He is "an expert on men," as he puts it. And women can't seem to get enough of Harvey's straight shooting, sending his first book "Act Like a Lady, Think Like a Man," onto the New York Times bestseller list and prompting his recent follow-up, "Straight Talk, No Chaser."

Harvey is not without detractors, who point out the thrice-married comic relies on played-out gender stereotypes and places all the blame for bad relationships on women, while ensuring that men are left largely to their own devices. But in a world where love advice comes from televised matchmakers who want to regulate everything from how you dress to how much curl to put in your hair, Harvey delivers his tart takes with charm. Still, can anyone really be an expert on what all men want?

We spoke to Harvey over the phone from the set of his radio show to discuss the media's obsession with single black women, why dating white men isn't trading up, and why he won't write a book for men.

I listen to "Strawberry Letters" on your morning show, and I wonder: Why do you think women call you with their problems? Because it's clear that some people are actually struggling to change, while others appear to be seeking a justification for their current situation.

Absolutely. Well, I think people know I'm gonna give it to them straight. Steve is going to give you his opinion -- his strong opinion -- and there's an outside chance that he might be right. And for the record, I am right 98 percent of the time.

The popularity of your first book suggests that you've tapped into a very specific problem. While your audience base is primarily black women, it's also crossed languages and cultures. Why do you think the book resonated with so many women?

See, the universal problem all women have is men. What women don't understand is that men, we're all the same. I don't care what color we are. We have the exact same traits in all of us. And based on the fact, I can say that I'm an expert on manhood. Not an expert on relationships. But I know exactly how men think in just about every situation. If you're dealing with a man, I know what you're up against.

And so "Straight Talk, No Chaser" is intended to answer all the questions you heard from women on the road.

Yeah. There is no creature on this earth more inquisitive than a woman. A woman will get it figured out eventually, please understand that. "I found out he was married, I found out he was a liar, I found out about other kids out of town." But I wanted to help women figure it out sooner rather than later.

It's a beautiful thing to act like a lady. But I need for women to know how men think. Be sexy with him, but not all at once. Give a man everything he needs, but not until you get what you need. A man isn't going anywhere just because he can't have sex with you for 90 days, unless he was out there just for the sex. I mean, let's understand it.

Women are the most powerful species on Earth. Why do you keep relinquishing that power to men, when it's men that need you? Men that can't live without you?

Not long ago, you were on a "Nightline" panel about black women and dating, which has been a hot media topic for the past year. There was even a news report from Russia on black women in America and being single. Why do you think we have such a fascination with why so many black women are single?

I think media and society recognizes the value of African-American women, as they should. African-American women are so strong. They have held together families seemingly on their own. And the focus is on them because there is such a wide disparity in available men of the same race because of educational problems, incarceration problems, unemployment problems.

Our community suffers greatly from those three things. But still, the African-American woman stands so tall and is so visible in the community, in the workplace, in the family structure. How are they doing it? It's almost a sense of admiration -- you all are having this trouble, let's find out how you all are getting it done? How can you continue to face all that you face, and still be as beautiful and strong as you are?

In all the dating advice being offered to black women, a few themes emerge. One is that since black men are unavailable, black women should date outside of the race, specifically white men. What do think about that?

I'm all for a person going for love. But people who date outside their race because they think it's gonna be some improvement, they are sadly mistaken.

How have the fellas responded to your book?

It's funny. It's been 50-50. "Man, I've been trying to say this to my wife, and I just didn't know how." Or, "Man, I can't believe you're dropping all the trade secrets like that." Come on, let's get real here. Women are trying to find love and happiness and want monogamous relationships. If that's not what you're about, let them at least have a level playing field. Tell them the rules we are really playing by. We can agree or not agree. If they want to be a part of your foolishness and your games, at least let them know what foolishness and games they're getting into. And if you don't like that, it's OK --men don't really buy books anyway.

So there's not a book for men in the works?

What I did with this book was, I slid a lot of conversations in for women to have with their men about some key issues. But unless men change, I will not write a book for men, because I don't want it just sitting on the shelves.