Max has autism and struggles with fine motor skills. Then he found a true motivator to improve: Tiger photos 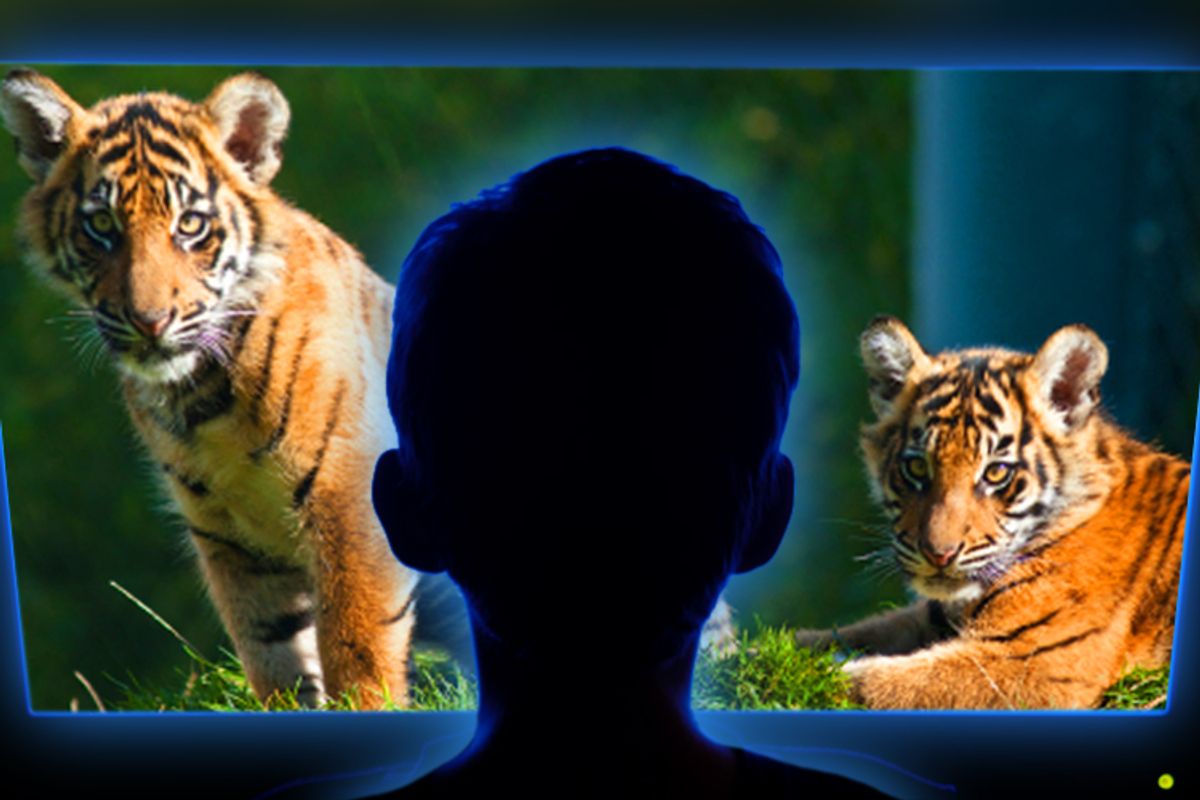 Last week, my husband left the room for 10 minutes to get dinner started, and returned to find that he was now a member of a Flickr group called Tiger Loverz. ("This is for all people who believ tigers are the most beautiful, most majestic animals ever! Do u love tigers THIS is the group 4 u!") Later, he discovered he had also favorited some photos of a Brazilian drag queen. It probably goes without saying this would not be typical Flickr activity for my husband.

My son Max has always been interested in the computer and likes to watch over my shoulder while I answer work e-mail or read the news. E-mail is boring to a 3-year-old, though, so sometimes I'd type in the name of an animal in the Flickr search bar and pull up a slide show of, say, tigers. Or giraffes, or elephants, or wolves, or whatever. Usually he asked for tigers, though.

My husband and I spent many hours debating the acceptability of this practice. He said it was like letting our kid watch TV, which we have scrupulously avoided so far. We don't own a TV and only occasionally stream a movie on the laptop after the kids are asleep. Since they rarely sleep, our own screen time is very limited. But we agree that TV for a 3-year-old, as a replacement for adult interaction, is probably a Bad Idea. I argued that it was more like looking at a book about animals, since I'm sitting there with him and we're talking about the pictures together -- just as I'd do if we were turning the pages of a book.

We gave up the ideological debate pretty quickly when we discovered that Flickr was a foolproof 10-minute distraction when we needed to throw in a load of laundry. I'd start the slide show for Max, set a time limit and run down to the basement to check the dryer. Max would dutifully close the computer the second his 10 minutes were up.

Pretty soon, he caught on that he could type the word "tiger" in the search bar himself, employing the hunt-and-peck method with liberal use of the backspace key. He figured out how to click "search" and "slideshow."

But all of this was good news. Max has autism, and he struggles with fine motor tasks and hand-eye coordination, enough to qualify for occupational therapy covered by our insurance. He can't put on his shoes or zip his jacket; his fork skills are on par with his 1-year-old brother's. He gets frustrated and gives up easily, resorting to "Want Mommy to do it" after 30 seconds. But we obviously just haven't found the right motivator. I have seen him spend his entire allotted 10 minutes in dogged pursuit of a successful double-click using the wonky, unpredictable track pad on a decrepit laptop. He accomplishes this by standing up in the chair, fanning his elbows out at a 90-degree angle, and jamming the index, middle and ring fingers of both hands down on the track pad simultaneously. It can take up to 30 tries before a successfully timed double-click is achieved, but he will let nothing stand between him and a screen full of polar bears.

We started to notice that the Flickr search bar would sometimes auto-complete with previous searches like "hhhhhhhhhhhhhhhhhhhhhhhhsjk;d;;;;;;;;;." We also discovered that if you search for "gazelle" on Flickr, you will find a couple of pictures of actual gazelles, and a whole lot of pictures of a drag queen named GazeLLe. I have no objection to my son viewing photos of drag queens. But when he doesn't get the gazelles he's looking for, he gets frustrated and bangs at the keyboard -- sometimes sending the laptop into Safe Mode. And a 3-year old typing random strings of text at the C-prompt is a recipe for disaster.

So this week, my husband registered a firstname_lastname@yahoo.com address for our son (a Yahoo address is required to join Flickr). Of course, he used Max's actual date of birth, and we soon learned that Flickr does not allow 3-year-olds to create accounts. You have to be at least 13. Rushing to wrap this registration up during one of Max's rare naps, my husband created a second Yahoo account, this time using a nickname and fudging the birth date. And in his haste, he misspelled the nickname. As a former state spelling bee champion, it bothers me that my son's first Internet "handle" is misspelled_nickname@yahoo.com. But I guess he will fit in just fine with the other Tiger Loverz.

But I went over to check, just to make sure he wasn't re-creating the chat-room scene from "You and Me and Everyone We Know."

Sarah Schneider writes about autism and parenting at Kitaiska Sandwich.