TSA, keep your hands off my baby!

I don't mind being groped, fondled or humiliated at the airport, but I draw the line at frisking my 1-year-old 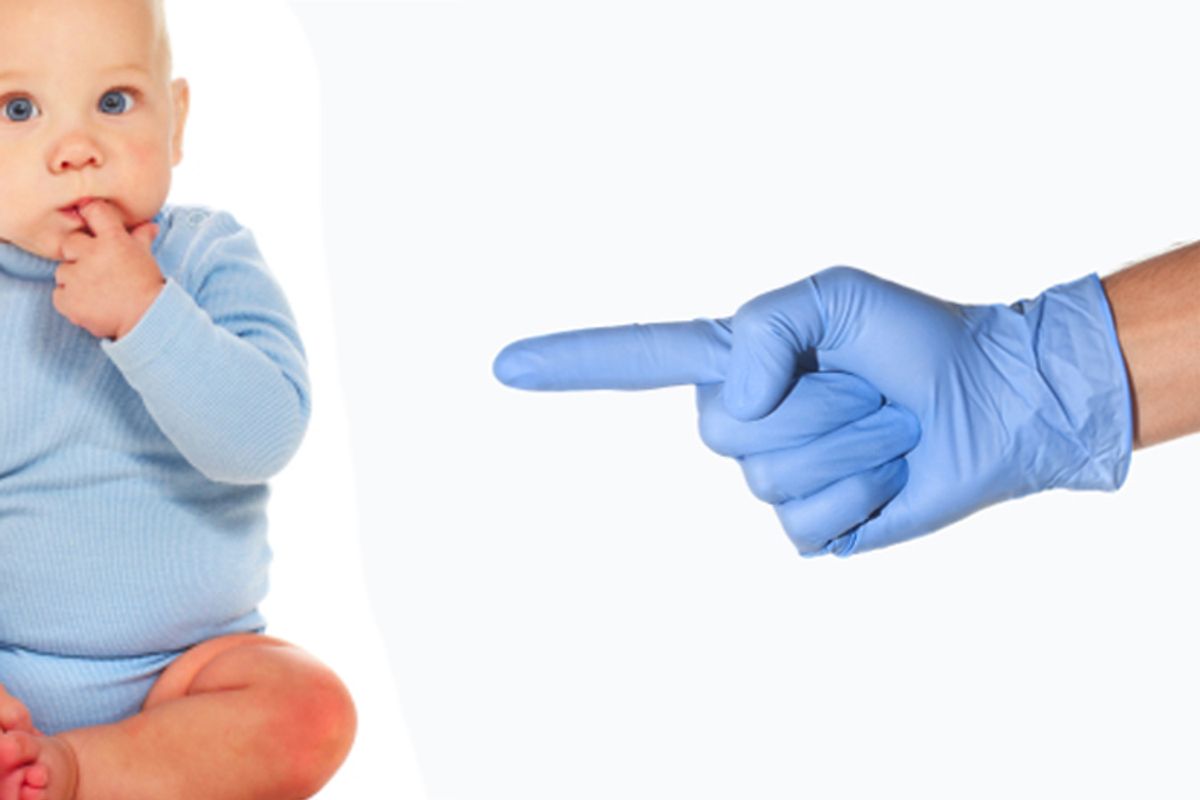 I am not, as a rule, an irritable flier. I don't yell at the gate agent when my plane is delayed or at the TSA people when I have to endure extra thorough screening or throw away my water bottle. I show up, set my sense of humor as high as it will go, buy a dried-out scone from Starbucks, and go on my merry way. If you want to wave a little strip of paper over my baby's sippy cup of milk to make sure I'm not going to blow up the plane with it, be my guest.

When a total stranger insists on feeling up my 1-year-old, though, that's when I lose my cool.

It happened at the end of a trying -- and tiring -- visit to my childhood home, which has, over time, become overstuffed with the relics of my brother's and my life as well as our parents' and their parents', too. For 10 days I prevented my toddling child from breaking any of a zillion pieces of crystal displayed on a glass cart in the dining room or choking on one of the various stray pills lurking in the woolly, hard-to-clean corners of the bathroom. My brother and I also managed to squeeze in the dreaded Conversation With One's Retirement-Age Parents that goes something like, "So where exactly are you planning to live when you can't, um, stay in the house anymore? And what are you planning to do with all this, erm, stuff?"

By the time I was making my way through the tiny Cedar Rapids airport on my way home to Seattle, pushing the stroller up to security, the last thing on my mind was what would happen if I set off the metal detector with the baby in my arms.

The first time I had to be wanded by the TSA was on the way to Hawaii for my honeymoon. I was five months pregnant -- and showing all over the place. "You sure you're not wearing a belt?" a uniformed someone barked as I set off the metal detector twice in a row. What pregnant lady wears a belt, I ask you -- particularly on a six-hour flight to Hawaii? When the "female assist" was called over to wand me, she took one look at my already-formidable-before-pregnancy-and-now-borderline-obscene-cleavage and said, "It's your bra." Apparently 34-Hs really pack in the metal.

I've taken 20 or so flights since then, and my bra has set off the metal detector about half the time. Each occasion is the same -- I'm asked numerous times by a disbelieving TSA guy whether I'm sure I'm not wearing a belt, carrying anything in my pockets, wearing hidden jewelry. Then much beeping, wanding and more beeping. I've been told by various female assists that I "shouldn't stick my chest out so far," that I should cross my arms over my chest as I walk through, and that only the really high-quality bras set off the machine -- so at least I know my girls are well supported.

By the time the baby's first birthday rolls around, most of us no longer even bother closing the door when we pee. If you want to wave a wand around between my legs to make sure I'm not gong to blow up the plane with something tucked into my crotch, fine. It's happened so many times now, I know exactly how far apart my feet should be without looking at the footprint guides on the floor.

When I flew to Iowa this past time I didn't even bother slouching through the detector multiple times to try to get a different result. "It's my bra," I told the TSA guy at SeaTac, looking him in the eye as I uncrossed my arms and stuck my chest out as far as it would go. Despite having read about the new intimacy of pat-downs and despite the TSA agent saying, "I'm now going to run the back of my hand along your bra line," I was as taken aback as everybody else has been when the TSA agent traced the underwires of my bra in their entirety -- which took about 20 minutes.

So I suppose I shouldn't have been surprised when the TSA insisted on patting down my daughter on our way back home to Seattle.

My husband had returned to Seattle a few days before us, and I'd never really thought about it but he's always been the one to carry the baby through security. When I walked through the metal detector with her, naturally I set it off. "Oh, it's just my bra," I muttered to the TSA guy, backing up and trying it again with a slouch made awkward by the 20-pound baby in my arms. The machine beeped again, and I reached for the stroller so I could set the baby down somewhere clean while a female assist had her way with me.

The TSA guy reached out to stop me. "No, ma'am. You cannot get your items until you've been hand-screened."

I asked where I should put her while I was being patted down.

He looked around anxiously for the female assist. "She has to be patted down, too."

Some uniformed bureaucrat was going to touch my baby all over the place, including between her legs? Were they going to remove her diaper, too, just to be sure? I mean, there's gel in those diapers and quite possibly over three ounces of liquid, too. Would they take her from me and lay her on the table for this procedure?

The mama bear in me roared instantly to life. "It's just my bra!" I shouted, for all of eastern Iowa to hear. "Can't I just go to the bathroom and take it off and then come through again? Or one of you could carry the baby through and I could come through again on my own. It's not her," I reiterated. "It's my bra."

"I'll take it off right here!" I said, reaching around with the hand not holding the baby to start undoing the 400 hooks in back.

The TSA guy stepped closer as if to stop me. "I'm sorry, but once you've been selected for extra screening we have to follow through."

"But it's not her fault," I said, going from mama bear to mama's girl as my eyes welled over at my utter inability to shield my child from injustice, from inappropriate touching, from bureaucratic incompetence and from airport floor filth -- not to mention from the inevitable trials her dad and I will cause her as we age.

The female assist arrived and kindly ignored my tears. She waved a hand nearish the baby's torso and called out, "OK, she's good. Bring the stroller over." She smiled at me and said, "You don't want to put your baby down on the floor here. It's filthy." Then she caressed me all over the place, told me she was "so sorry," and sent us on our merry way home to Seattle, a blessed 1,800 miles away.