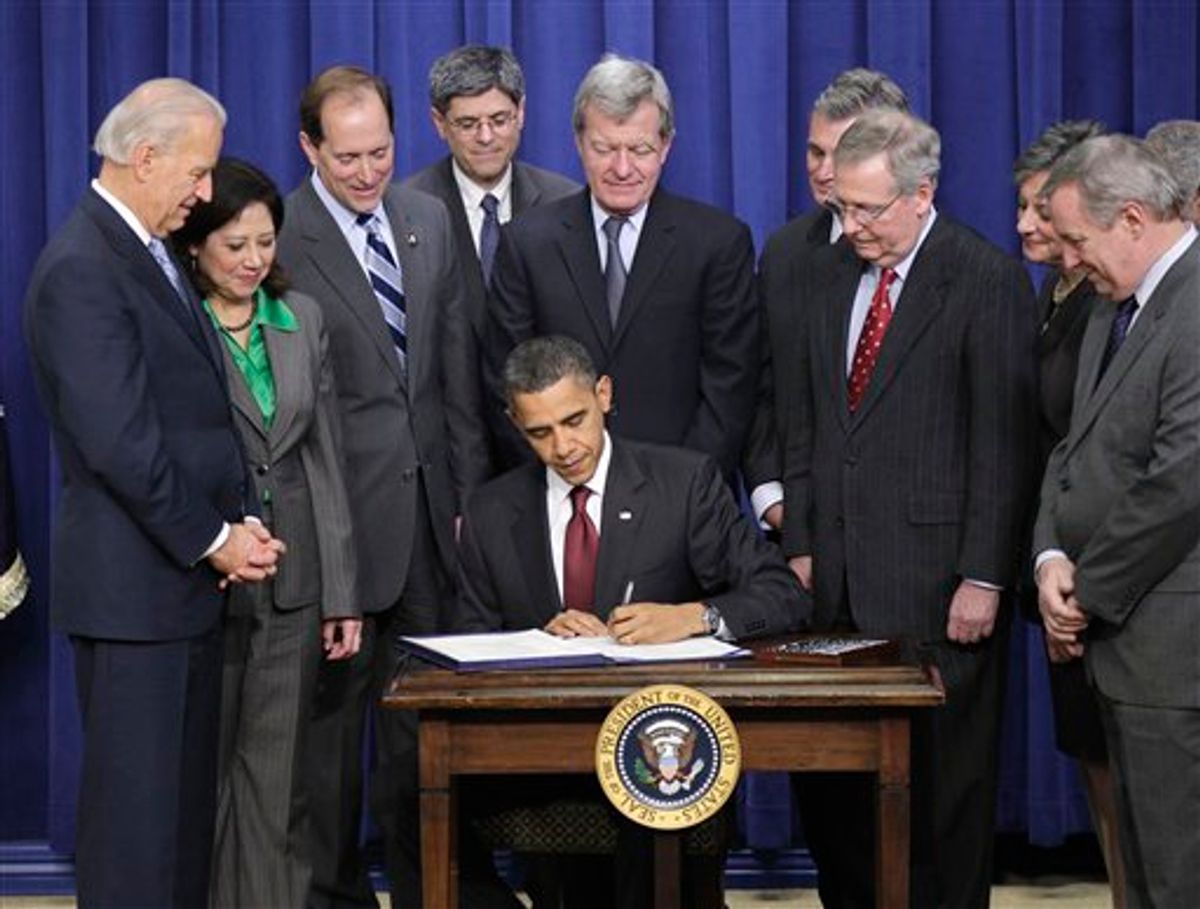 FILE - In this Dec. 17, 2010 file photo, President Barack Obama, joined by Republican and Democratic lawmakers, signs the bipartisan tax package that extends tax cuts for families at all income levels, during a signing ceremony at the Eisenhower Executive Office Building on the White House complex in Washington. The massive new tax law signed by President Barack Obama is filled with all kinds of holiday stocking stuffers for businesses: tax breaks for producing TV shows, grants for putting up windmills, rum subsidies for Puerto Rico and the Virgin Islands. (AP Photo/J. Scott Applewhite, File) (AP)
--

The massive new tax bill signed into law by President Barack Obama is filled with all kinds of holiday stocking stuffers for businesses: tax breaks for producing TV shows, grants for putting up windmills, rum subsidies for Puerto Rico and the Virgin Islands.

There is even a tax break for people who buy race horses.

Millions of homeowners, however, might feel like they got a lump of coal. Homeowners who don't itemize their deductions will lose a tax break for paying local property taxes.

The business tax breaks are part of sweeping legislation that extends Bush era tax cuts for families at every income level through 2012. Obama signed the $858 billion measure a week ago. It also provides a new payroll tax cut for wage earners and extends jobless benefits to the long-term unemployed.

Most of the business tax breaks -- about 50 in all -- are part of a package that expires each year, creating uncertainty for tax planners but lots of business for lobbyists. Many of these tax breaks have been around for years but expired at the end of 2009 because lawmakers couldn't agree how to pay for them.

The new law extends most of them through 2011, some through 2012. They will be paid for with borrowed money.

Nearly 1,300 businesses and trade groups formed a coalition urging Congress to extend the business tax breaks. Others lobbied for specific provisions, including a generous tax credit for research and development and subsidies to produce alternative energy.

There is a generous tax break for banks and insurance companies that invest overseas, a tax credit for railroad track maintenance, more generous write-offs for upgrading motorsport race tracks, and increased deductions for businesses that donate books and computers to public schools and libraries.

Many of the tax breaks are designed to encourage economic activity. But passing them each year at the last minute, or skipping a year and passing them retroactively, isn't terribly efficient, said Clint Stretch, a tax expert at Deloitte Tax LLP.

"It gives it a lot of dignity to call it a 'system,' " Stretch said.

Every year, taxpayers risk losing their favorite tax breaks, if they are not renewed. That's what happened to millions of homeowners. For 2008 and 2009, homeowners who didn't itemize their deductions were able to get an extra deduction -- on top of the standard deduction -- for paying local property taxes. Individuals could reduce their taxable income by as much as $500, couples could cut theirs by $1,000.

The provision, which has saved homeowners about $1.6 billion a year, expired for 2010 and was left out of the new tax law.

"A lot of Americans don't make so much money that they itemize their tax returns. But those same Americans own property," said Sen. Max Baucus, D-Mont., who sponsored the original tax break. "It seems to me that they, too, should have the ability to deduct it. It's a matter of equity."

Taxpayers who itemize will continue to be able to deduct local property taxes. About two-thirds of tax filers don't itemize.

Among the provisions in the new law:

--A tax break that allows profitable companies to write off large capital expenditures immediately -- rather than over time -- giving some companies huge tax shelters.

The tax break, known as bonus depreciation, benefits automakers, utilities, heavy equipment makers like Caterpillar Inc., and John Deere, air freight companies like Fedex Corp., and wireless companies like Verizon and AT&T, said Anne Mathias, director of research for the Washington Research Group, which provides research to institutional and corporate investors. It will save companies nearly $21 billion over the next decade.

"It helps companies that use expensive capital equipment, that spend a lot of money," Mathias said. "It also helps places where the economy is growing, like wireless infrastructure, because there is a pretty big wireless build out right now."

The tax break is also available to people who buy race horses and farmers who buy cattle for breeding or dairy, according to a depreciation list produced by the Internal Revenue Service.

--An exemption that allows banks, insurance companies and other financial firms to shield foreign profits from being taxed by the U.S. through 2011. Cost: $9.2 billion.

The tax break is important to major multinational banks and financial firms, such as Citigroup, Bank of America, Goldman Sachs and Morgan Stanley, and to the financing operations of other international companies, Mathias said.

--A tax credit for research and development, benefiting a wide range of industries, including pharmaceutical and high tech companies. The law extends the tax credit through 2011, at a cost of $13.3 billion.

"The House and the Senate are in the holiday spirit and giving US companies a present of $13 billion in potential R&D Tax Credits!" says a press release by Braithwaite Global Inc., a firm that advises companies on applying for research tax credits.

--Increased tax rebates to Puerto Rico and the Virgin Islands from a tax on rum imported into the United States. The U.S. imposes a $13.50 per proof-gallon tax on imported rum, and sends most of the proceeds to the two U.S. territories.

--Extends a grant program for the production of wind, solar and other renewable energy through 2011. Cost: $3 billion.

"This is a great holiday present for the 85,000 American workers in the wind energy industry, tens of thousands of whom will now be able to get back to work in a sector that has been a bright spot in the recession so far," Denise Bode, CEO of the American Wind Energy Association, said in a statement.

--Enhanced deductions for companies that donate food to the needy, books to public schools or computers to public libraries, through 2011. Cost: $537 million.