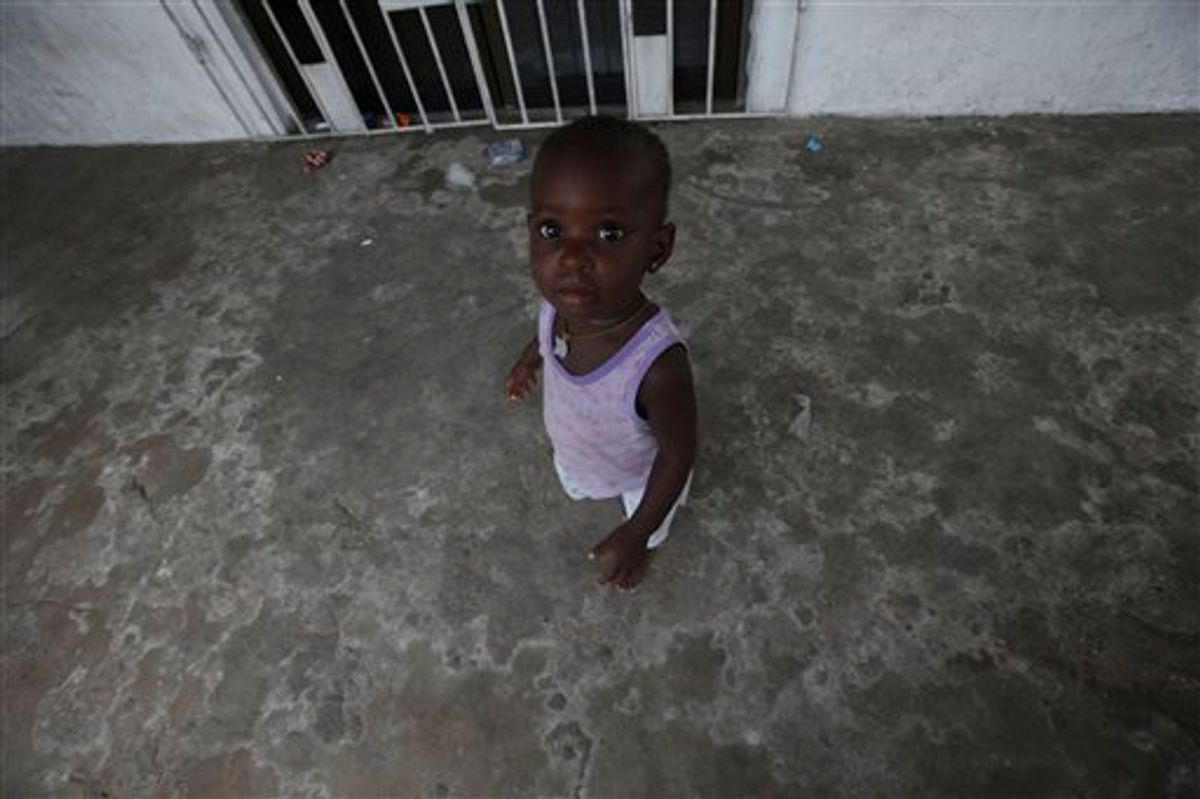 A child who fled with his mother following a deadly army attack on Ayakoromor village stands at a microcredit organization where they have take refuge with other members of the community in the nearby town of Warri, Nigeria, Saturday, Dec. 4, 2010. The military launched Wednesday a massive attack including aerial bombings that was aimed at finding a wanted militant. Civilians caught in the middle tried to escape with their lives, human rights activists say. The violence represents yet another example of how those toiling in poverty in a region that makes billions for Nigeria find themselves caught between a military seeking revenge and power-hungry militants.(AP Photo/Sunday Alamba) (AP)
--

Multiple explosions in central Nigeria have killed 32 people and six others died in attacks by Muslim sect members on two churches in the north, officials said Saturday.

Police spokesman Mohammed Lerama said that 32 people died and at least 74 were injured in four bomb blasts Friday night that went off in close succession in different parts of Jos in central Nigeria -- a region violently divided between Christians and Muslims.

Manasie Phampe, the Red Cross secretary in Jos, gave slightly different figures and said that 52 people were injured, and that some of the injured were in intensive care at the Jos University Teaching Hospital.

"We have commenced investigations and are making efforts to calm people down," said Lerama.

Religious violence has claimed over 500 lives this year in Jos and neighboring towns and villages, but the situation was believed to have calmed down.

Nigeria, a country of 150 million people, is almost evenly split between Muslims in the north and the predominantly Christian south. The blasts happened in central Nigeria, in the nation's "middle belt," where dozens of ethnic groups vie for control of fertile lands.

The violence, though fractured across religious lines, often has more to do with local politics, economics and rights to grazing lands. The government of Plateau State, where Jos is the capital, is controlled by Christian politicians who have blocked Muslims from being legally recognized as citizens. That has locked many out of prized government jobs in a region where the tourism industry and tin mining have collapsed in the last decades.

"What has happened on the eve of Christmas is unfortunate, especially at this time when we want to ensure peace and security in the state," said Gregory Yenlong, the state commissioner for information. He said that nobody had claimed responsibility for Friday's attacks in Jos.

This is the first major attack in Jos since the Plateau State government lifted a curfew on May 20. The curfew had first been imposed in November 2008 during postelection violence but it was extended in January following clashes between Christian and Muslim groups.

More than 300 people-- mostly Muslim -- were killed in the January violence in Jos and surrounding villages.

The curfew improved the security within a city that has hosted numerous peace conferences to address the violence but the killings continued outside.

Twelve people were gruesomely murdered in March in a small Christian village, attackers cutting out most of their victims' tongues and there are still regular attacks outside Jos.

Maiduguri is about 320 miles (520 kilometers) northeast of Jos. The attacks in both cities have not been linked, but Boko Haram was first based in the city of Bauchi, only 75 miles (120 kilometers) from Jos, before moving its operations to Maiduguri.

Danjuma Akawu, secretary of Victory Baptist Church said about 30 men attacked his church on Christmas Eve, killing five people, including the pastor, two choir members rehearsing for a late-night carol service and two passersby who were attacked by the mob

Akawu, who escaped with other witnesses after climbing the church fence, said that the mob was armed with guns, knives and petro-bombs.

He said the attackers came in three cars and dragged the pastor out of his house within the church premises before shooting him to death. They drove off after setting the church and pastor's house ablaze close to the Maiduguri International Airport.

At the opposite end of the city, Rev. Haskanda Jessu of Church of Christ in Nigeria said that three men attacked his church an hour later, killing a 60-year-old security guard, Philip Sopso. The church was empty at the time of the attack. Jessu said the attackers were armed with rifles.

The Borno State police chief said the attacks could have been prevented if police officers had heeded warnings of a planned attack.

"The police divisions had enough vehicles to prevent these killings," Abubakar said.

Police have not made arrests but accuse Boko Haram members of a rash of targeted killings in recent months during which more than 30 people have been killed including police officers, soldiers, political and spiritual leaders.

Boko Haram means "Western education is sacrilege" in the Hausa language. Its members re-emerged recently after starting a July 2009 riot that led to a security crackdown that left 700 people dead.

The Christmas Eve killings in Jos and Maiduguri add to the tally of thousands who already have perished in Africa's most populous country in the last decade over religious and political frictions.