The former president has waged war against the disease for more than two decades. The last battle is in the Sudan 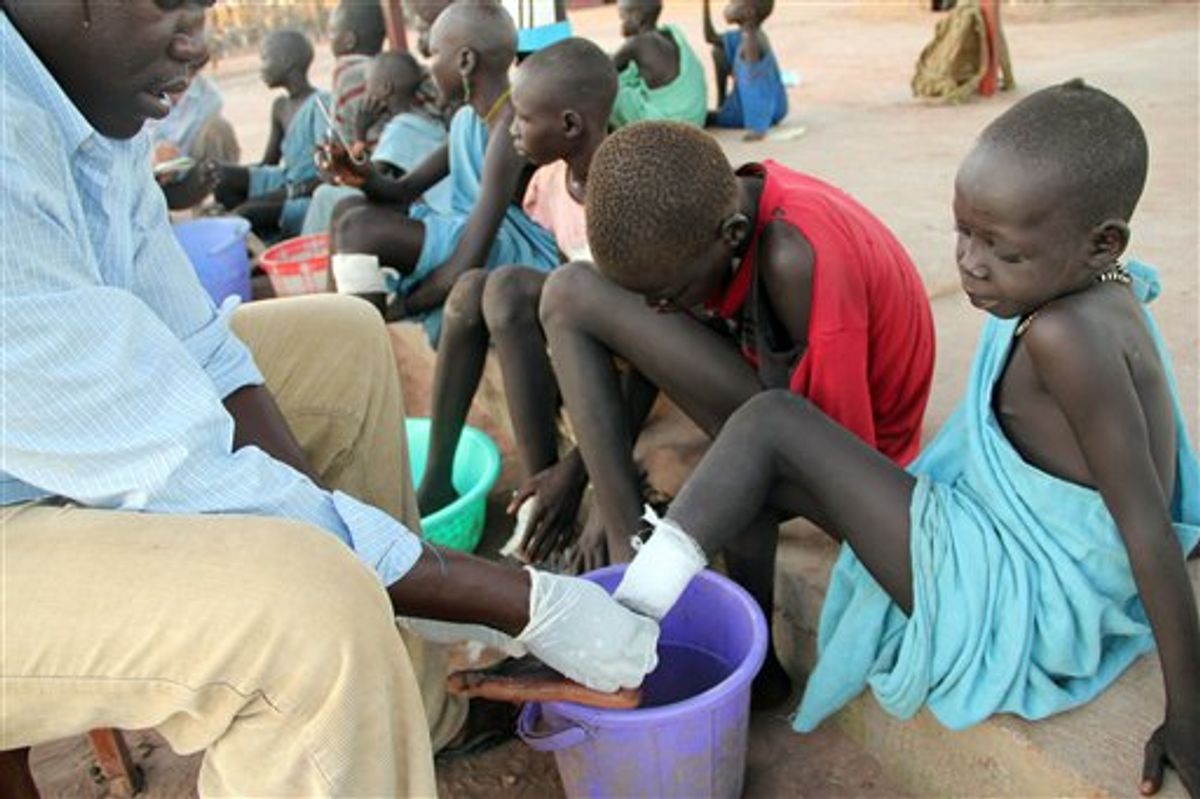 In this Nov. 4, 2010 photo, Ajak Kuol Nyamchiek, 7, watches while John Lotiki, a nurse with the Carter Center, bandages the blister on her leg from where a guinea worm is slowly emerging in Abuyong, Sudan. Nyamchiek is a patient at Centers guinea worm case containment center. Nurses at this center in Abuyong, a village in Awerial County in Southern Sudans Lakes state, bandage the worms twice daily, after gently pulling the worms out several inches each time. If they break while they are being pulled out of the swollen blisters, the wounds become infected and the worms withdraw back into the body, prolonging the pain for the victims. (AP Photo/Maggie Fick) (AP)
--

Lily pads and purple flowers dot one corner of the watering hole. Bright green algae covers another. Two women collect water in plastic jugs while a cattle herder bathes nearby.

Samuel Makoy is not interested in the bucolic scenery, though. He has an epidemic to quash.

Makoy points out to the women the fingernail-length worm-like creatures whose tails flick back and forth. Then a pond-side health lesson begins on a spaghetti-like worm that has haunted humans for centuries.

This fight against the guinea worm is a battle former U.S. President Jimmy Carter has waged for more than two decades in some of the poorest countries on earth. It is a battle he's almost won.

In the 1950s the 3-foot-long guinea worm ravaged the bodies of an estimated 50 million people, forcing victims through months of pain while the worm exited through a swollen blister on the leg, making it impossible for them to tend to cows or harvest crops. By 1986, the number dropped to 3.5 million. Last year only 3,190 cases were reported.

Today the worm is even closer to being wiped out. Fewer than 1,700 cases have been found this year in only four countries -- Ethiopia, Ghana, Mali and Sudan, where more than 95 percent of the cases are. The worm's near-eradication is thanks in large part to the efforts of Carter and his foundation.

"I'm still determined to outlive the last guinea worm," Carter told The Associated Press in a phone interview. The 86-year-old set that goal in the 1980s, when his center helped eliminate guinea worm from Pakistan and other Asian nations.

The Carter Center has battled the worm for 24 years through education and the distribution of strainers that purify drinking water. It has helped erase guinea worm in more than 20 countries, and it believes the worm will follow smallpox -- which was wiped out in the late 1970s -- as the next disease to be eradicated from the human population.

But Carter staff members say ending the disease in Southern Sudan may prove the most difficult, because of how remote the remaining endemic areas are and the fact that the worm is found in semi-nomadic pastoralists who have little education and low sanitation standards.

Another complicating factor: Southern Sudan is scheduled to hold an independence referendum Jan. 9, a vote that is likely to lead to separation from the Khartoum-based north. The process has been peaceful so far, but any conflict that arises would derail eradication efforts.

As Carter put it: "War and good health are incompatible."

"There's no way we can go into an area that is at war," he said.

Although the Carter Center has been fighting guinea worm in Sudan since 1994, its efforts only made significant headway following the signing of a 2005 peace deal that ended two decades of north-south civil war.

The 20 years of fighting prevented the Carter Center and other authorities like the World Health Organization from conducting a comprehensive assessment of guinea worm here until 2006. Since then, eradication programs have reduced the number of yearly cases by about 90 percent.

The few remaining cases exist in off-the-map places. In many sites, the Carter Center is the only outside presence -- no other international or Sudanese organizations have set up shop. Even a government presence is rare.

"We are in the most remote places because that's where the guinea worm is," said Doug Tuttle, 31, a technical adviser with the Carter Center who lives in a tent in the village of Abuyong. He oversees a staff of paid field officers and guinea worm volunteers whom he visits on his motorcycle or by walking anywhere from 30 minutes to two hours.

Reaching Abuyong requires abandoning the dirt road for a narrow path hacked through dense woods that was only forged after the Carter Center moved in. On a recent bone-rattling ride to Abuyong in the center's hulking, Russian-made truck, the vehicle forded flooded ravines as the occasional baboon scampered away.

At the picturesque pond outside Abuyong, Makoy explains to the women that if someone enters the pond with a guinea worm hanging out of a blister, the worm will dump larvae that will mate with the white worm-like creatures -- copepods -- and render the pond endemic with guinea worm.

Makoy doesn't use the words "endemic" or "copepods" with the women. His aim is to deliver a more pragmatic message: that filtering water is the key way to avoid contracting the disease.

"This work requires a passion inside you to keep you going day after day. Even if you must repeat the same things 100 times to the same person -- education, education, education," said Makoy, who works for the Southern Sudanese government's Ministry of Health and has collaborated with the Carter Center since 1996.

Makoy hands both women mesh filters and explains how to use them. Then he repeats a message he has delivered thousands of times -- that even one person with a hanging worm who enters a water source can trigger scores of cases in the next transmission season, roughly a year after someone drinks tainted water.

Change is difficult here. As someone who comes from a pastoralist tribe, Makoy knows that cattle herders on the move don't think twice about drinking from a brown puddle. In a place like Abuyong, where the few water hand pumps each cost thousands of dollars because water lies so deep under ground, accessing any water -- infected or clean -- is a blessing.

By January, the cattle camp next to Abuyong will have cleared out and the large pond dry. The 500-plus cattle and their keepers will move to the Nile River, where they will remain for the blisteringly hot dry season.

It won't be until May that some begin to notice red puffy blisters developing on their legs and feet, the sign of a soon-to-emerge guinea worm.

That's what 7-year-old Ajak Kuol Nyamchiek had to deal with a couple weeks ago as a worm exited her foot at a Carter Center clinic in Abuyong, where worm victims stay while the worms make their painful exits. Nurse John Lotiki slowly pulled the thin, white worm out of the girl as Ajak looked on with pain -- and appreciation.

Pulling a worm out is a weekslong process of rolling out the worm by coiling it on a pinkie-length stick, about an inch (2.5 centimeters) a day. Aside from surgery, this centuries-old extraction method is the only way the guinea worm can be removed safely.

Carter, whose center began working in Sudan in 1987, said he knows the people appreciates the work his team does.