Peanut butter sugar toasts, a gift from my father

In this season of big-time giving, sometimes it's the little presents you cherish 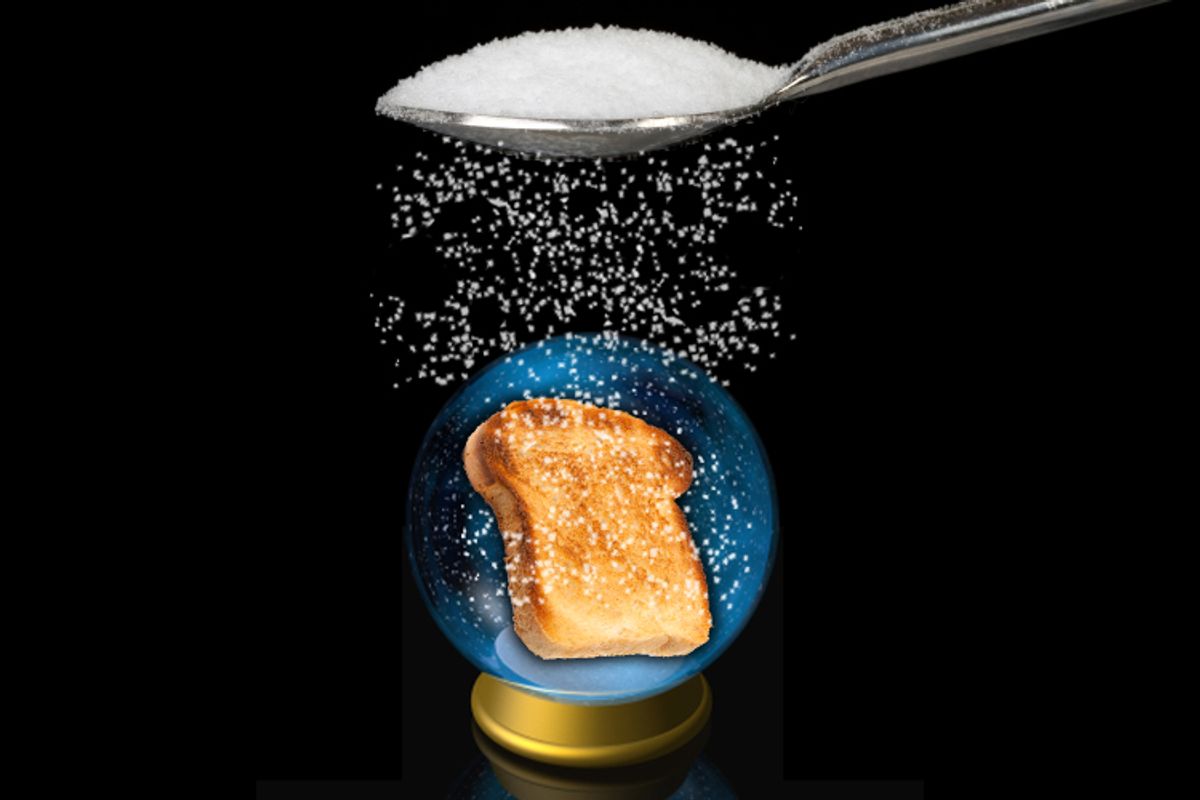 Correction: The recipe below has been corrected to specify that peanut-butter-slathered toasts should go back in the toaster oven, not a regular ol' vertical toaster. Apologies to any toasters that may have been harmed in the process.

I hope you're enjoying your presents this year; me, by the time you read this, I hope to be doing headstands on a new baking stone and watching my lady friend's niece read some adorable book I pilfered from Salon's review pile. But all the wish-lists and festively wrapped boxes and commercials for cars tied up with bows have me thinking about the small gifts, the little presents life presents you with, the inconsequential gestures that become the things you remember.

Once, when I was a kid, very young, I woke up hungry in the middle of the night. For some reason, I wobbled over to Dad's side of the bed and shook him instead of Mom, who even then I knew would have been the much better culinary bet. He had a hard time waking up, but he put on his robe and slippers, took my hand, and slowly shuffled over to the kitchen. He reached for my favorite cereal sitting on top of the fridge and poured me a bowl of Alpha Bits. I remember crawling up to the chair, my feet dangling, and eating happily; I remember the sweet, grainy flavor, how cold the milk was, how my father smiled at me as he started dozing back off to sleep at the table.

I've kept this memory close in my heart for as long as I can remember. It's one of my favorite memories of my father, of my life. A couple of years ago, I was telling some friends this story, and, like every other time I've ever told it, I saw it all again clearly. The images roll in my mind as if a film, and the words come, describing the intense blue of the carpet, the staircase outside the kitchen door, the shape of the appliances. And as I was telling this story, I suddenly realized that I was describing a house I'd never lived in. Our carpets were always beige; our staircase on the other side of the house from the kitchen. I stopped in mid-sentence. "Oh my God," I said. "I dreamt that. That never happened."

My poor, excellent friends. They looked at my face and heroically snapped into the emotional Heimlich, assuring me that even if the facts of my story are all wrong, the emotional truth is still there. Yes, yes, I agreed as soon as I could breathe again. I love my Pops, and I know he's always loved me too. And he would be happy to wake up in the middle of the night to pour me a bowl of cereal any time. My dream reminded me of that, and that's a gift in itself.

Another time, though -- a time I know happened -- he showed the young me another gift. Again hungry, with no one else in the house but us two, I grew distressed. I mean, this is the man whose only culinary act up until that point of my life consisted of pouring me an imaginary bowl of cereal; when it came to housework, he was the definition of the patriarch, only without all the backyard grilling. I looked around the house for him, in the living room, in his room, in the garage, hoping he'd drive us out to get some cheeseburgers. I finally found him in the most unlikely of places, the kitchen, fixing himself a snack. "Hey, Jai Jai," he said, calling to me with the phrase "little son" that he's called me my whole life. "I made something to eat. Want one?"

He handed me a peanut butter sugar toast, something he said he remembered from his youth, a treat from when he was a kid and times were tough, and that he had suddenly got into his head to make for me. I bit into it, the crisp-then-squishy bread and the just-warming, just-melting peanut butter brightened by sugar crystals crunching between the teeth like sparkles. And so there we were, father and little son, snacking together for a few minutes on a random Sunday afternoon, a few minutes I'll keep forever.