The promises Obama wants you to keep forgetting

What candidate Obama promised and, two years into his presidency, has not delivered 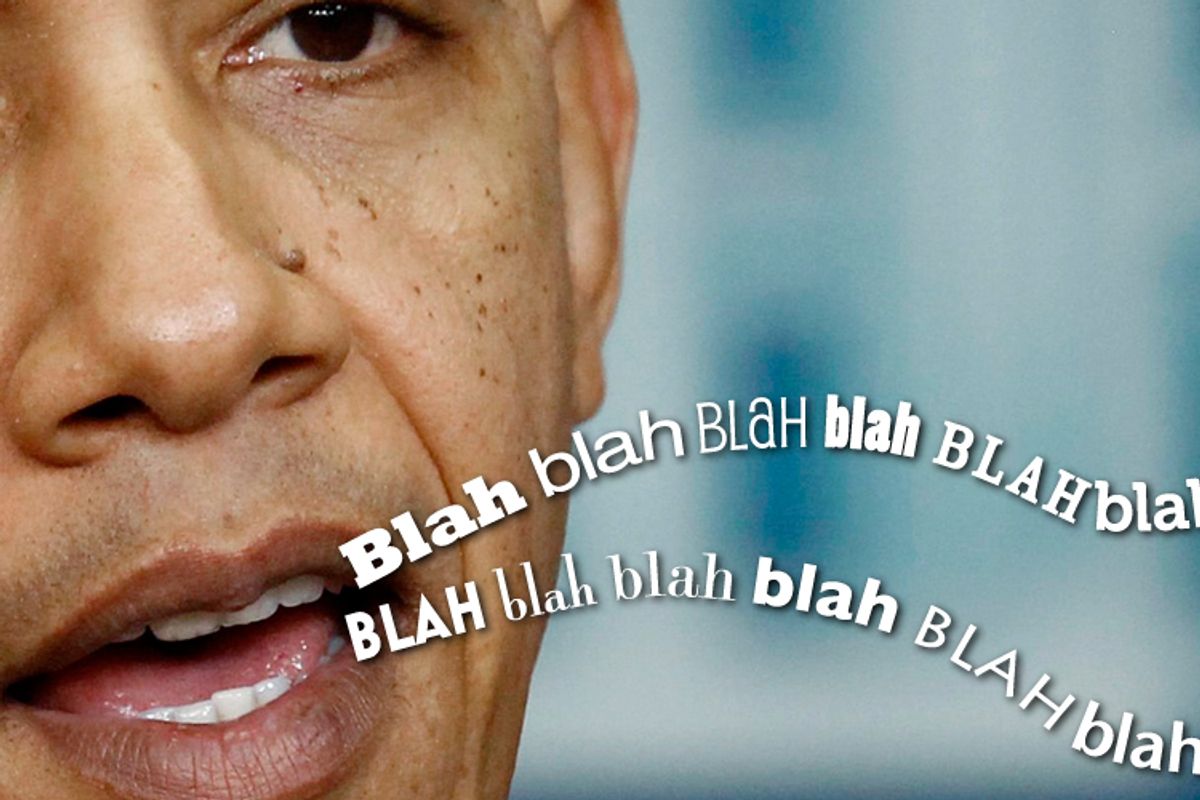 In early December, a combative President Obama challenged reporters at a press conference: "Look at what I promised during the campaign. There's not a single thing that I've said that I would do that I have not either done or tried to do. And if I haven't gotten it done yet, I'm still trying to do it."

Given the president's challenge, and the fact that we're about to reach the halfway mark of his administration, we took the opportunity to check in on his campaign pledges. As it turns out, there are plenty of clearly stated promises, in areas big and small, that Obama has not kept. PolitiFact, which pretty much has this market cornered, has been tracking hundreds of Obama promises.

A few broken promises, like Obama's pledge to shutter the prison at Guantánamo Bay, are well known. But there are plenty more campaign promises that have disappeared down the memory hole -- and that Obama would prefer to stay there. Here is a sampling of five:

"State of the World" speech:

In an October 2007 speech on foreign policy, candidate Obama offered this novel promise: "I'll lead a new era of openness. I'll give an annual 'State of the World' address to the American people in which I lay out our national security policy."

President Obama has delivered scores of formal speeches since January 2009, but he simply never followed through on the "State of the World" idea.

Back to the Moon:

Candidate Obama's space policy (.pdf) -- an issue that is closely watched in the crucial state of Florida -- had this to say: "[Obama] endorses the goal of sending human missions to the Moon by 2020, as a precursor in an orderly progression to missions to more distant destinations, including Mars."

After the campaign, returning to the Moon faded from Obama's agenda. Finally, in the 2011 budget, the administration completely abandoned the idea, calling the NASA Moon program "over budget, behind schedule, and lacking in innovation due to a failure to invest in critical new technologies." The budget said the Moon program had drawn funding away from the more important areas of "robotic space exploration, science, and Earth observations."

In his plan (.pdf) for "Renewing U.S. Leadership in the Americas," candidate Obama promised: "Barack Obama will double the Peace Corps to 16,000 by its 50th anniversary in 2011 and push Congress to fully fund this expansion, with a focus on Latin America and the Caribbean."

So what actually happened? According to PolitiFact, the administration's 2011 budget proposal called for a modest increase in funding for the popular program. But the promise to double the corps has gone out the window. The 2011 budget calls for the Peace Corps to reach just 11,000 volunteers by 2016, a lower goal set much farther off.

Obama's campaign ethics plan included this easy-to-keep pledge: "Too often bills are rushed through Congress and to the president before the public has the opportunity to review them. As president, Obama will not sign any non-emergency bill without giving the American public an opportunity to review and comment on the White House website for five days."

While that's the sort of thing that excited good government advocates, it's pretty clear that Obama was never really serious about this one. He broke it in the first 10 days of his administration, signing the Lilly Ledbetter Fair Pay Act without the five-day Web comment period. Since then he has broken it repeatedly, on pieces of legislation such as the credit card reform bill.

Immigration bill in one year

In a May 2008 interview with Univision's Jorge Ramos, Obama said of comprehensive immigration reform: "I cannot guarantee that it is going to be in the first 100 days. But what I can guarantee is that we will have in the first year an immigration bill that I strongly support and that I'm promoting. And I want to move that forward as quickly as possible."

This, clearly, did not happen. In fact, we're about to pass the two-year mark of the administration without an immigration bill being promoted by Obama. But this promise was arguably harder to keep than the first four, and falls into the expansive category of promises stymied in part by congressional opposition (see, for example, closing Gitmo).