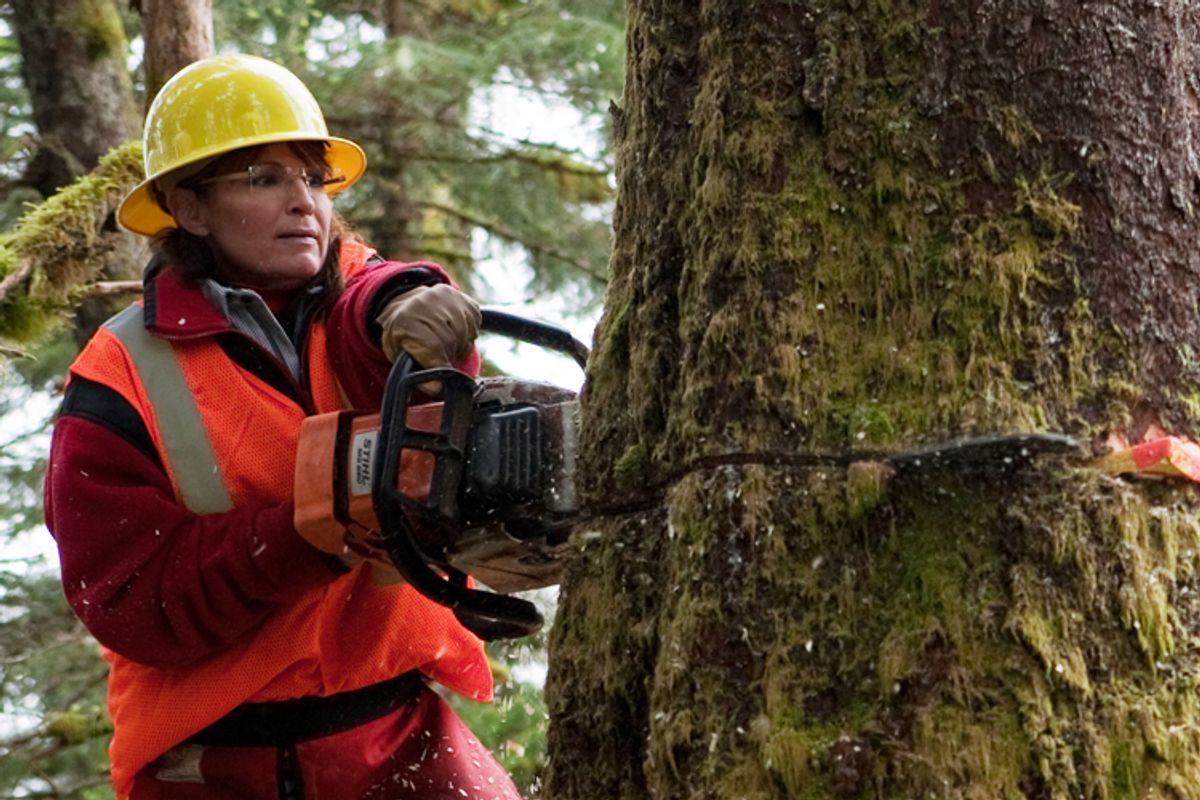 This week's episode took us from Afognak Island, where we learned about the Alaskan logging industry, to Kodiak Island to race cars and watch bears. I'm not going to sugarcoat this for you, folks -- because there's just no way to get around how incredibly dull it is to watch Sarah Palin cut down a tree. And then pick up that tree and move it onto a pile of other trees. And then push that bundle of trees into the water. Because that's pretty much all that happened this week -- except for when Willow drove a pink stock car and played with her phone. And then they all sat in chairs and looked at bears.

Why would this be broadcast on television, you ask? To drive home variations on the themes that Sarah's been shoving down our throats all season, of course.

Can you believe it? And would you also believe that there are perfume-scented pansies who write Sarah letters with their "pretty little pencils" about how offended they are that people cut down trees -- apparently without realizing that they're writing their sissy notes on the very paper that Alaska produces?! And did you know that those San Franciscan, falafel-eating pinkos really BURN HER UP?! Did you KNOW that?

And not only is it hard work, but this week we faced down the most difficult teenager in all the land -- 16-year-old, eye-rolling phenom Willow. Oh, Willow got on Sarah's last nerve in this episode. Each of Sarah's kids look a little catatonic in every scene of her show, as if their will to live has been completely sucked out of their lifeless bodies, but nobody has perfected the look of blank contempt quite the way Willow has. And this week, she made our favorite Mama Grizzly GROWL.

Which brings us to our final theme:

Theme 3: Sarah is the HARDEST-WORKING MOM IN ALASKA! AND PROBABLY THE WORLD!

But we already knew that, didn't we?

Before anything happened, however, we were fortunate that TLC was filming when Sarah realized her "refudiate" mistake was making headline news and listened as she explained that the whole thing was an accident -- because apparently on Sarah's specially designed Alaskan keyboard the "f" is right next to the "p" (either that, or she's just a pucking idiot.)

Anyway, as I mentioned earlier, this episode followed Sarah as she grabbed a chainsaw and felled a tree, and then hopped in a huge shovel logger and moved trees, and then drove a Boom boat and played bumper cars with the floating trees to push them out into the open water to be picked up by big boats to be taken somewhere to be made into patio furniture and Gideon Bibles -- while Todd shoved his hands in his pockets and shuffled listlessly in the background, Willow shredded lettuce in the Evergreen Logging Camp mess hall and I stuck red hot pokers in my eyes having realized that 40 minutes of my precious life had gone by and there was nothing I could do to get it back. Ever.

In between it all, Sarah pecked, prodded and squawked at Willow about how important it was to work hard and be confident and learn to cook and put the damn phone down once in a while when her mother was talking to her, dammit. Meanwhile Willow rolled eyes left, then right, then up, then down, then sighed and huffed and puffed and texted and slumped and scoffed and generally drove her mother around the bend. And it was exhausting. And yet somehow deliciously satisfying. Fight the power, Willow!

Finally, we boarded the plane to Kodiak Island where Sarah, Todd and Eye-roller made their first stop at the Kodiak Island Raceway -- a place that could accurately be described as Mad Max's Thunderdome set on a Mississippi flood plain. Here, Todd and Willow donned flame-retardant gear and took turns racing stock cars around the track while Master Blaster called out each lap's time and Sarah waved a checkered flag from her rusty perch. There was a momentary wisp of excitement as Willow gently bumped into a dirt bank on her last lap, triggering fire-truck sirens and dramatic background music as raceway personnel rushed to her aid to find that … nothing was even the least bit wrong. Willow got out of the car, somebody asked her how it was and she said "pretty cool" and then went back to her phone, presumably to text boyfriend Andy about how bored she was.

We ended the day with a trip to Frasier Lake to watch Kodiak bears fish for salmon. Right off the bat Sarah's hippie detector was triggered by the guide who explained that he preferred bear spray to a firearm when she asked him how he protected himself. "Bear spray is more effective anyway," he explained, prompting a scoff from Sarah as she performed her own eye roll for the documentary cameras. Apparently there are Alaskans out there not sticking to the "kill anything that moves" script.

The episode once again ended with a long-winded soliloquy from Sarah -- this time espousing the virtues of her "Mama Grizzliness" as a real Mama Grizzly frolicked with her cubs in the background, Todd stared blankly forward, the hippie guide munched on gorp and Willow sighed deeply, wondering if she was going to get home in time to watch "Gossip Girl."