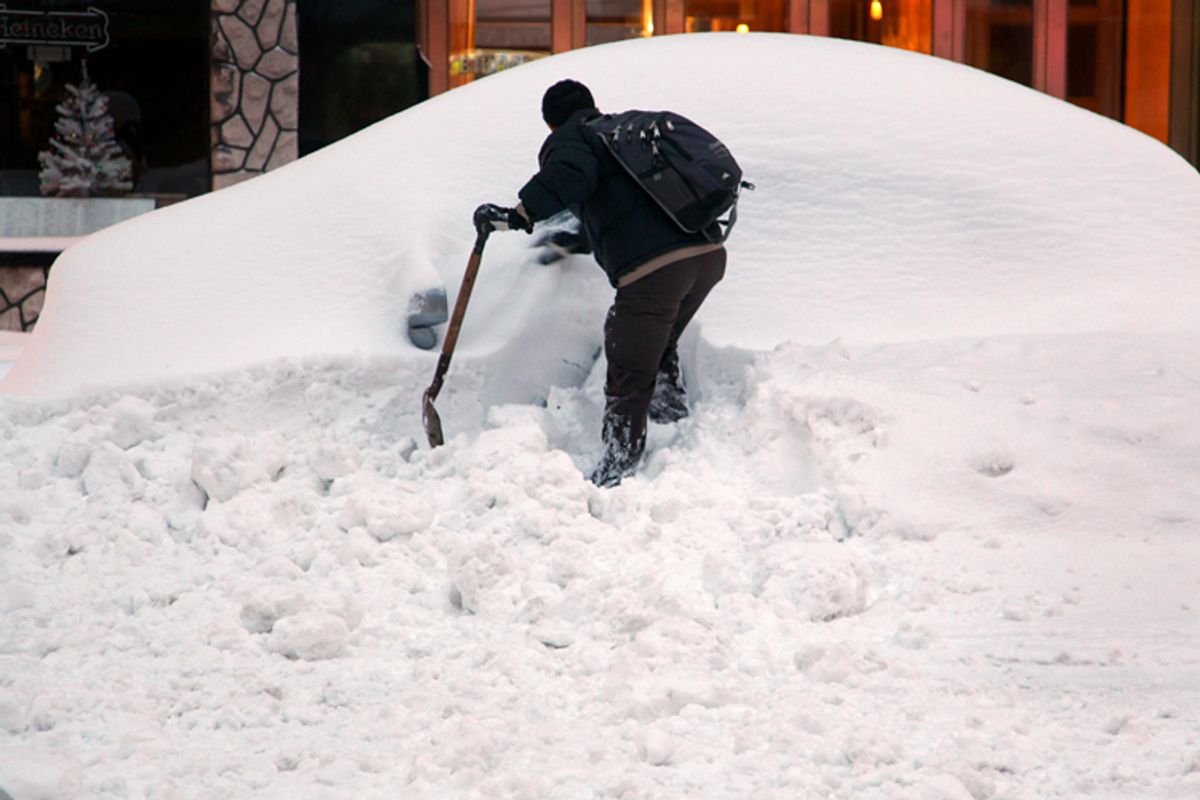 A powerful East Coast blizzard menaced would-be travelers by air, rail and highway Monday, leaving thousands without a way to get home after the holidays and shutting down major airports and rail lines for a second day.

Officials urged anyone who did not have to drive to stay off roads in the region, where high winds pushed snow into deep drifts across streets, railroads and runways. More than two feet of snow had fallen in some areas by Monday morning.

In Monmouth County, N.J., state troopers carried water and food to diabetics marooned on two passenger buses carrying about 50 people on the Garden State Parkway, where stranded cars cluttering ramps stymied snow plows and ambulances, state police spokesman Steve Jones told NBC's "Today" show. One bus was freed by 7 a.m. and the other was expected to be out soon, he said.

"Most of the people are pretty calm, but they are getting antsy," said New Jersey State Police Trooper Chris Menello, who along with his fellow troopers raided their personal stash of food to bring to the passengers.

Menello said the traffic jam started around 5 p.m. Sunday evening with a woman who went into labor.

"She and her husband had three small children in the car all under the age of 5," he said.

An ambulance was able to reach her and bring her to a nearby hospital, but by then the Parkway became a parking lot, with accumulating snow preventing people from digging out.

Hundreds of travelers dozed Monday in Long Island Rail Road train cars frozen at the platform. Others lay like refugees at the entrance to the train link to Kennedy Airport and stood helpless at the ticket office, waiting in vain for good news to flash on the schedule screens. Hours went by without a single train leaving with passengers.

Buses were knocked out as well, cabs were little more than a myth and those who tried walking out of the station were assailed with a hard, frigid wind that made snowflakes sting like needles.

"They tried, but they can't do much with this snow. It's just not stopping," said Sharray Jones, 20, headed home to Long Island after visiting friends.

A blizzard warning, which is issued when snow is accompanied by sustained winds or gusts over 35 mph for three hours, was in effect early Monday from Delaware to the far northern tip of Maine. The storm was expected to bring its heaviest snowfall in the pre-dawn hours Monday, sometimes dumping 2 to 4 inches an hour. A total of 12 to 16 inches was expected across nearly all of Rhode Island, Connecticut and eastern Massachusetts, though forecasters said winds of 50 mph could create much deeper snow drifts.

States of emergency were declared in North Carolina, Virginia, Maryland, New Jersey, Maine and Massachusetts, where Gov. Deval Patrick urged people who did not have to be on the roads to stay home, to ensure their safety and that of work crews. Nonessential state workers were told to stay home Monday.

Sitting alone at a table in the food court was Alicia Kinney, a 25-year-old mission worker from Columbus, Ohio. Her flight to Newark, N.J., was cancelled, and she could not get a confirmed seat until Wednesday. Kinney slept overnight on benches in the baggage claim area before moving up to the food court for a soda in the morning.

"I came at 4 p.m. (Sunday) and got a standby seat to Cleveland, but at the last minute, that flight was cancelled. By then, it was too bad outside for my friends to come back and get me," Kinney said. "It's a funny situation. I'm trying to stay positive."

In Philadelphia, cab driver Farid Senoussaoui, 33, described navigating the slippery conditions as "like a video game." Senoussaoui had worked overnight during the storm and said passengers were universally grateful when he would stop to pick them up.

In New England, many commuters appeared to be heeding the call to stay off the roads. In greater Boston, highways into the city were nearly abandoned early Monday as many workers were given the day off and others were on vacation for the holiday week.

The blizzard-like conditions wreaked havoc on travelers from the Carolinas to Maine.

Airlines scrambled to rebook passengers on thousands of canceled flights -- more than 1,400 out of the New York City area's three major airports alone -- but said they didn't expect normal service to resume until Tuesday. Amtrak canceled train service from New York to Boston after doing the same earlier for several trains in Virginia.

A spokesman said Boston's Logan International Airport could take days to get back to normal.

Wind gusts of up to 80 mph knocked out power to thousands. Utilities reported about 30,000 customers were out in Rhode Island and Massachusetts, mostly on Cape Cod and south of Boston.

In Wells, Maine, police say a 59-year-old man died several hours after his pickup crashed into a tree during whiteout conditions Sunday night.

In Connecticut, Allie Campbell discovered her mother had taken a critical fuse out of her car Sunday night to ensure her daughter's safety.

"She texted me and said, 'You don't pay for the insurance, you're not driving,'" Campbell said Monday, laughing, as she reported to her job at Katz ACE Hardware in Glastonbury -- after her mother surrendered the fuse.

Peter Iarossi, a train conductor for MBCR, which operates commuter rail trains for the Massachusetts Bay Transportation Authority, saw his normal 15-minute commute stretch to an hour because of the blizzard conditions.

He woke up extra early and was sitting in his idling car at the railyard an hour before his 6:45 a.m. train was to leave to start its run to Boston.

"You're here to bring the people to Boston," Iarossi said. "You don't have an option. People count on you -- especially in bad weather."

The monster storm is the result of a low pressure system off the North Carolina coast and strengthened as it moved northeast, the National Weather Service said. Because of it, parts of the South had their first white Christmas since records have been kept.