Why are Bush's book sales so great?

In two months, Bush sold as many books as Clinton did in six years. Do people miss him? 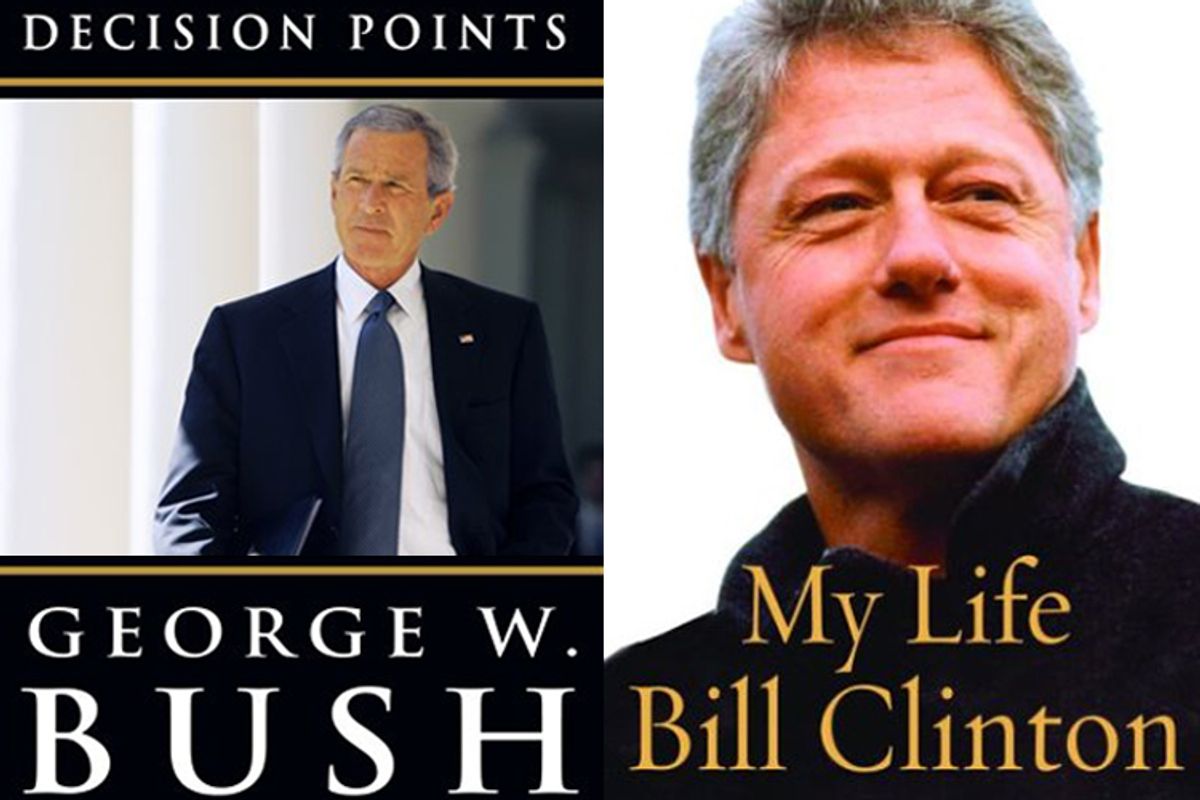 According to Crown Publishing Group, George W. Bush's lightly plagiarized memoir "Decision Points" has already sold more than 2 million copies -- counting e-books -- since it went on sale in November. That's a lot! As Glynnis MacNicol points out, that's almost as much as Bill Clinton's book has sold since it was released six years ago.

But ... why? Clinton left office with good approval ratings and was largely remembered fondly, especially as the Bush years dragged to their depressing end. Bill's also smart and articulate, and his administration's scandals tended to be more personal in nature than Bush's. In addition to being an awful communicator, Bush is famously reticent to reflect on his decisions, and in his book he's obviously relying on other people's written accounts of his presidency, which is ... a bit odd, to say the least.

But people are apparently eating it up, or at least they are paying money for it. Here are my theories:

His publisher is lying

I mean, it's not super-likely, but these numbers are from a press release, not BookScan. Though the book has been on top of the Times Best Sellers list for six weeks, so it is outselling everything not involving Swedish investigative journalists, or vampires.

Bush's book is cheaper than Clinton's

Despite the fact that it's a brand-new hardcover, "Decision Points" is currently on sale at Amazon for the low, low price of $18.89 -- $16 less than the list price. A hardcover "My Life" costs $23.10 new. (A Kindle version of either book will cost you $10, but there was obviously no such thing as a Kindle copy when "My Life" was first released.)

It was a popular "gag gift"

People really just want that guy to finally explain himself

Americans were not particularly fond of President Bush once his administration finally ended, and maybe some of the millions of people who hated the man are just looking for an answer to the question of why, exactly, he did such awful things. Why approve torture? Why invent intelligence to justify the invasion of Iraq? Why not have plans in place to stabilize and secure either of the countries we invaded until years after we toppled their governments? Why use your congressional majorities to slash taxes on millionaires while working people's wages stagnated and the income disparity grew larger? Why keep Rumsfeld around for so damn long? Why Scott McClellan?

All of those particular decisions baffled many more than 2 million people.

And there are probably a lot of people who are buying it just to see if the guy feels bad about anything, or if he's still the same cheerfully contented guy he's been his entire adult life. While a lot of people might've bought "My Life" to see how Clinton explained some of his own questionable decisions, that particular president had already spent a lot of time explaining himself.

Things suck now for a lot of people, and Bush's personal approval ratings are higher now (though not much higher) than they were back when people actually had to see him on the news regularly. I don't think there's all that much Bush nostalgia -- not one prominent Republican has even said the guy's name in two years -- but there might be a million people whose lives were way better during the Bush years, and who bought his book to relive the magic.

On the other hand, Clinton nostalgia was pretty pervasive during the first decade of the 2000s and it didn't boost his book sales.

The sales of books by awful right-wing authors like Jonah Goldberg are boosted by an entire industry dedicated to ... boosting the sales of books by awful right-wing authors. Conservative book clubs purchase tens of thousands of copies and right-wing think tanks order right-wing books in bulk. There's probably a bit more genuine demand for George W. Bush's wisdom than, say, Laura Ingraham's wit, but every little bit helps. And there was no progressive equivalent of the right-wing book-buying machine to boost Clinton's book when it was released.

It's a really, really good book

I mean, it's possible. I haven't read it. Maybe it has a surprise ending where Bush reveals that Dick Cheney was dead the whole time. Or maybe it was all a dream!

Bush's book is shorter than Clinton's

It's half the size. Americans hate reading. I think this is it, actually.