At 14, I weighed 76 pounds and was disgusted by my own reflection. This isn't just a girl's disease 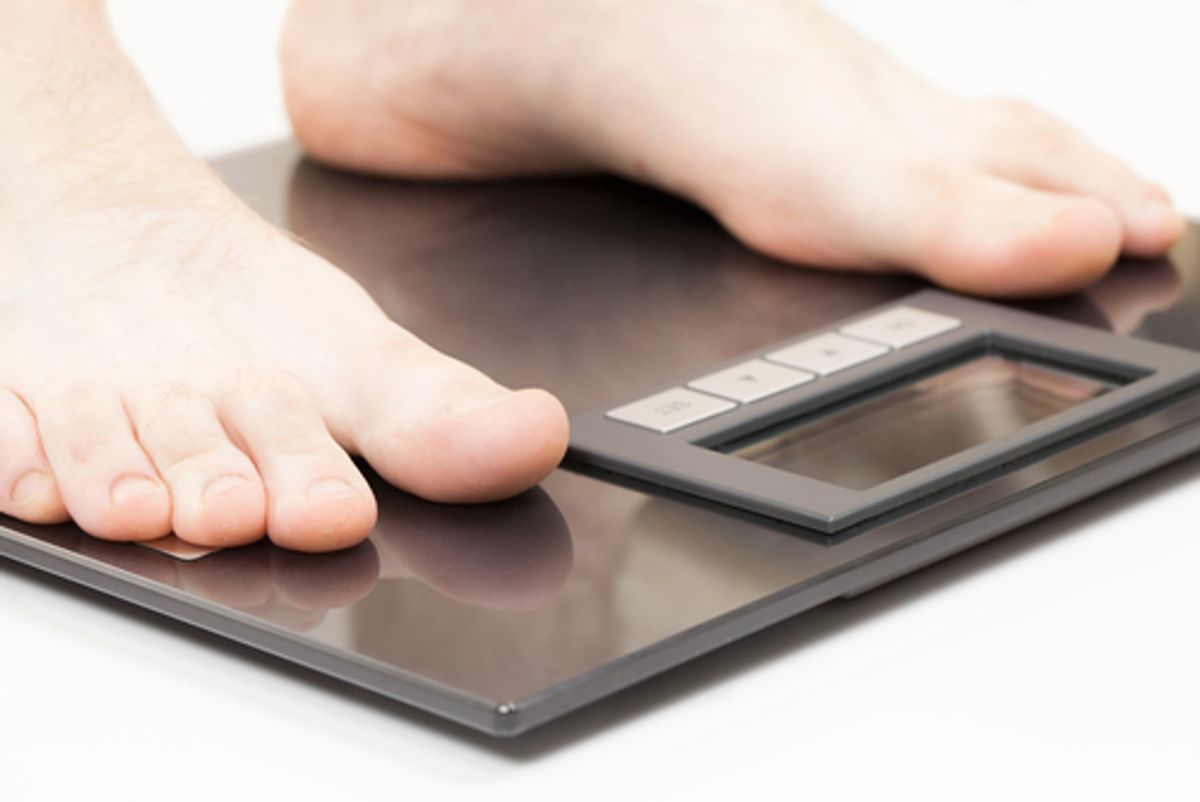 Sitting in the waiting room at a clinic two hours from my hometown in Alabama, I brushed the bangs of my long hair so that I couldn't see my face reflected in the glass door. Beside me sat a woman who must have been in her 70s. She looked me over -- shirt hanging loose on my torso, hollow cheeks, pants sagging on the last notch of my belt -- and offered me a magazine.

"Have a look at it," she said. "There are pretty pictures." At the time, I didn't understand why someone would give a women’s fashion magazine to a 14-year-old boy. Looking back, it's so obvious: She mistook me for a girl.

After all, it's mostly girls who have anorexia. That's the stereotype, at least -- an affluent white-girl disease. But anorexia has increased among boys in recent years, especially younger ones. Not that I felt, or looked, much like a boy at the time. Puberty had been halted by two years of starvation. I was nearly androgynous -- which is odd when you consider that it's partly the pursuit of girls that brought me to that clinic in the first place.

I was a normal-sized boy, but after a severe sinus infection put me in the hospital for two months in fourth grade, I gained 20 pounds. At 5 feet 8 inches, I weighed a healthy, embarrassing, terrible, natural, miserable 135 pounds. I became the chubby kid in fifth grade. I always wore my T-shirt in the pool. Over the summer, though, I grew three inches and shed 10 pounds. It was like a magic wand waved over my sad-sack life: Did Susan McDonald, the class beauty, really just touch my arm she was cracking up so hard at my joke? Was I really, during recess, the second one chosen for kickball?

I was euphoric. And I was hooked. If this was what happened after I lost 10 pounds, what would happen if I lost 20? My brain -- with its genetic predisposition to addictions -- alighted with possibility. Who could have known something as innocuous as a growth spurt could lead to starving myself?

I began to structure my life around the intake of food. First I skipped breakfast. Then I skipped lunch. Eventually I didn't eat dinner at all. The needle on the scale sank to 125, to 120, to 115, to 110, numbers inversely proportional to my self-esteem but directly proportional to my happiness. My teachers considered it a harmless loss of baby fat. My parents shrugged it off as a symptom of puberty. As I crossed into double digits, however, people began to whisper. I appeared to be wasting away, the victim of some terminal Victorian disease, the poetic and tragic mystique of which pleased my future writer's self.

Eventually I lost interest in the opposite sex. Which was ironic, since what I had wanted was to get closer to them. I can still remember my first time not to kiss a girl. Molly lived down the block. She was the first girl in our grade to develop breasts, which is to say, every guy secretly had a crush on her. One chilly night in late October, she and I went for a walk around our neighborhood, discussing how to pronounce our names backwards. Molly offered me a piece of gum.

"What flavor?" I asked, not because I had a particular preference, but because I worried about the calories.

"Strawberry," she said. "Sugar-free." We chewed on Trident for the rest of our walk.

Near the bottom of her driveway, under the pale glow of a streetlight, Molly stared at me with her lips parted just enough to seem an invitation. As I leaned in to kiss her, my empty stomach growled so loudly it almost did not sound human. I could have sworn it echoed. Later, after I'd blurted an excuse about dinner and darted home, I curled my 95-pound body into bed and concentrated on my humiliation in order to ignore the hunger that was its cause.

My parents could no longer stay oblivious to the problem, but they were ill-equipped to handle it. They tried to fatten me with junk food -- burgers, fries and shakes from Hardee's. Alone in my room I pretended to eat a daily dose of four greasy "Frisco Burgers." Hiding spots soon grew short in supply. The bottom of my hamper reeked of sourdough bread and cheese, and the back of my closet mildewed from soggy lettuce and tomatoes. Sometimes I had to flush the burgers down the toilet after tearing them into little pieces. Sometimes, at night, I snuck out and fed the burgers to our neighbors' dogs, a small army of puppies weaned on an early diet of 100 percent ground beef, crisp bacon, rich mayo and American cheese.

But I couldn't hide the weight I was losing. In a picture from that time my arms and legs dangle, gangly and lifeless as a marionette. In my normal clothes, I look like a child donning my father's oversized business suit. No smile. No recognition of my surroundings. My gaze lies inward, on the dark matter of my stomach. That's when my parents initiated the weekly weigh-ins.

My parents told me I that if I didn't gain weight, there would be Consequences and Repercussions involving boarding school, groundings, shame. Every week I was expected to gain a pound. I had to step on a scale every Monday night with my mother standing beside me. Obviously I had to find loopholes. At the time it felt like creativity; now it seems much more like insanity.

The aerobic leg weights proved the easiest part. Some I would shackle to my ankles; others I would lodge behind my belt. Next, after many test trials, I learned that bottles of White Rain Shampoo, thin and curved like a whiskey flask, were the perfect shape for taping to my abdomen -- Apple Harvest was my favorite -- and that duct tape provided adequate tensile strength. Often I smelled strangely of cider. Within months I had "gained" 15 fabulous pounds according to our scale. Then one morning, it all ended.

I stood in my room, fresh from the shower, toweling my crotch and armpits that, despite my being 14, had hardly begun to sprout hair. Weakened and distracted by the constant flame in my stomach, I did not realize the door was unlocked, nor did I sense it slowly begin to open. My mother gasped at my naked torso. She dragged me, literally and easily, to the scale. She thought I weighed 120 pounds at the time. The needle wavered for a few brief moments and peacefully settled on the number 76.

My mother screamed the way I imagined a pterodactyl would scream at its prey. "Why?" she screamed. "Why?" It was ancient and terrible and horrified me. She slapped me across both cheeks, once with each of her trembling hands.

That day, my father checked me out of school, picked up my mother, and drove us to a specialist in Alabama. My dad never spoke the entire trip, but his eyes were glassy with tears. A man who in college was nicknamed "Donut" could not understand what was happening to his son. For that matter, neither could I.

Although I wish I could say what prompted such a troubled time – whether it was a result of pop culture’s focus on being thin or some faulty wiring in the genetic makeup of my brain – the only thing I can say for certain is those were the worst two years of my life.

The doctor administered a battery of tests that revealed my body was frozen at the cusp of puberty, my voice refusing to deepen into adulthood, my muscles failing to develop into those of a man. Adolescence had become a kind of incarceration -- when all I wanted was to escape. But I learned to understand my anorexia as an immature and almost fatal type of rebellion.

At a time when people were trying to control me, anorexia became a way for me to exert my own independence. I wouldn’t let my parents or the school board tell me what to eat and when to eat it. I wouldn't even let my body develop without my say-so. I've been told some anorexics become obsessed with their own reflection in the mirror. By the end, I couldn't even look at myself without feeling disgust.

"Anorexia is not a sign of vanity," I was told by the doctor told after the tests. "Point of fact, it’s the exact opposite."

Over the next few years, a victim of a car crash developing his muscles through physical therapy, I relearned how to eat as well as how to live. Each bite was a slow chew, but the weight came back. I grew four inches. My bone age gradually reunited with my actual age. I gained 40 pounds. I still feel guilty at how I made my family suffer, but my self-image began to recover. Soon, too, the mirror was no longer warped into a fun house grotesquerie.

But there was one thing that lagged behind. I could not tell people about the disease. Never once did I say "anorexia" aloud during high school. I was horrified what it would say about me, to have a "girl's disease." I worried what people would think. Over those two years, I had hidden so much from others -- my parents, my friends, my teachers -- but I had also hidden from myself. Intimacy was as foreign to me as introspection. When I finally confided to a girl I was dating about the whole thing, it was a revelation. Maybe that's why it's so important for me to tell it now.

The life of an anorexic is a life of secrecy. That's not my life anymore.

Snowden Wright is a writer living in New York City. He has contributed to Nerve, Thought Catalog, and The Good Men Project. More of his work can be found at Snowdenwright.blogspot.com.