Could it actually be Mike Huckabee? 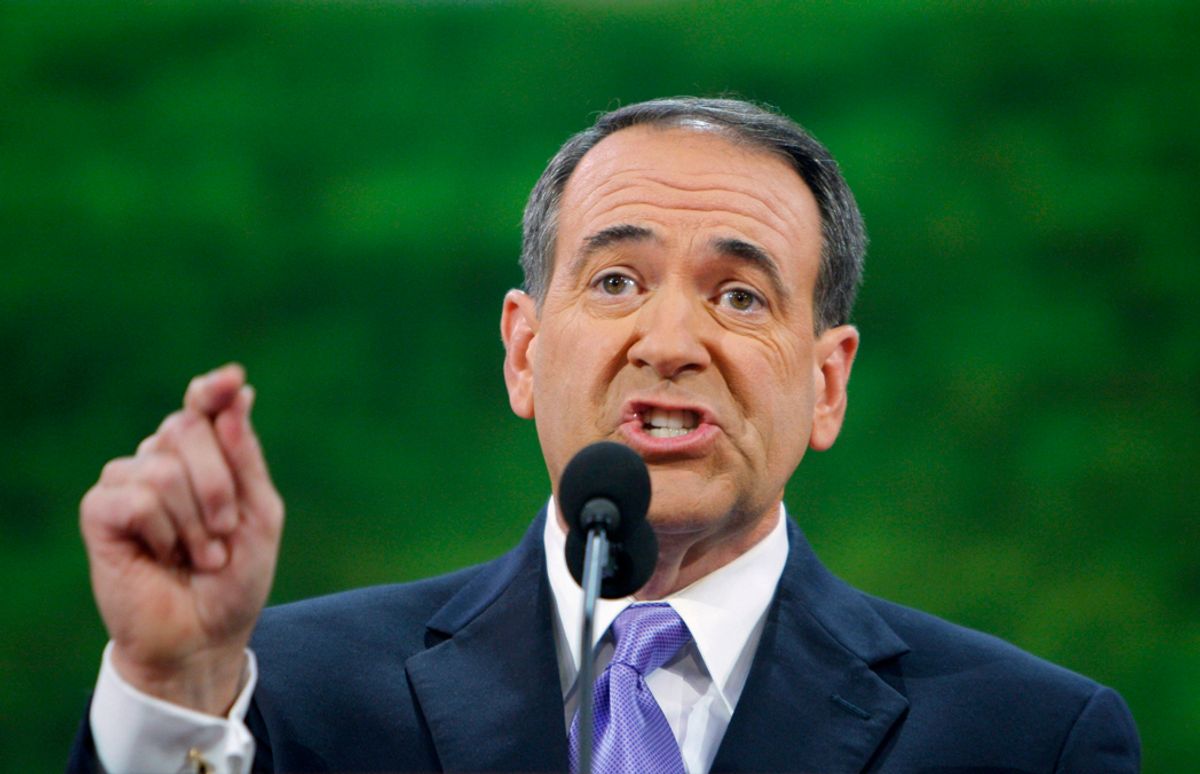 The race for the 2012 Republican presidential nomination looks a lot like the race for the NFC West title did for most of this fall: You know someone has to win it, but all of the contenders have glaring flaws that should rule them out of contention.

The "next in line" candidate for the GOP, a designation that can be helpful but that isn't all it's cracked up to be, is Mitt Romney, but his background and style seem flagrantly ill-suited to the mood of today's GOP base. The Republican Party that threw out Robert Bennett, Lisa Murkowski, Bob Inglis and Mike Castle in 2010 and that embraced Sharron Angle, Christine O'Donnell, Ken Buck and other Tea Party purists hardly seems poised to rally around a man whose dedication to the cause is as questionable as Romney's.

There's also Sarah Palin, who typically runs at or near the top of polls with Romney, but as my colleague Justin Elliott just noted, there are now clear signs that the Republican base is souring on the idea of nominating her as their standard-bearer. In the last year, according to a new CNN poll, the number of Republicans who say they'd be receptive to supporting Palin for the '12 nod has plummeted by 20 points. (Perhaps this has something to do with the increasing willingness of conservative opinion-shapers to cast doubt, however delicately, on the former Alaska governor's general election viability.)

There's also reason to doubt that any of the second-tier prospects will break out. Tim Pawlenty is trying hard -- too hard, probably -- but his platform seems too formulaic and his style far too bland to gain much traction. Mitch Daniels is just as dull, but at least he's getting some love from the think tank wing of the GOP; then again, so did Pete du Pont in 1988. Haley Barbour probably just talked himself out of serious contention. John Thune has crossed the Tea Party on TARP and now earmarks. Rick Santorum is old news. Chris Christie is a talented and charismatic communicator who actually seems well-positioned to tap connect with the Tea Party crowd -- but it's highly unlikely he'll run, since it would almost certainly kill his 2013 reelection hopes in New Jersey, and he just spent nearly a decade of his life positioning himself for that state's governorship. Plus, his wife is dead set against him running.

All of this brings me around to the one big GOP prospect I haven't yet mentioned: Mike Huckabee. My instinct has been to dismiss him as a serious contender, partly because I've assumed his appeal is too narrow (religious conservatives in the South and in caucus states), and partly because of all of the pardons he doled out as governor of Arkansas. But it's getting harder to ignore the polls: The same CNN survey that shows Palin's GOP support collapsing also shows -- not for the first time -- that Huckabee is the most popular '12 prospect in the party. 67 percent of Republicans say they are "very" or "somewhat" likely to back him for the nomination. Only 59 percent say the same about Romney. (Plus, 40 percent say they are not likely to back Romney, compared to only 31 percent for Huckabee.) The numbers are much worse for Palin (and for Newt Gingrich for that matter, if you think he's actually running.)

Republicans like Mike Huckabee an awful lot. Granted, it hasn't been that hard for him to burnish his image these past two years, with his syndicated and Fox News television shows. Plus, his fellow Republicans aren't out there attacking him, or drawing attention to those pardons, or to some of the other less-than-conservative pronouncements he's made and positions he's taken over the years. if he does run -- and, unlike with Romney, it isn't yet clear that he will -- Huckabee could see his lofty standing with Republicans erode quickly. But it's also worth acknowledging that, at least for now, he probably deserves the title "front-runner" as much as -- or more than -- any other GOP prospect.