Frigid hell night on the A train 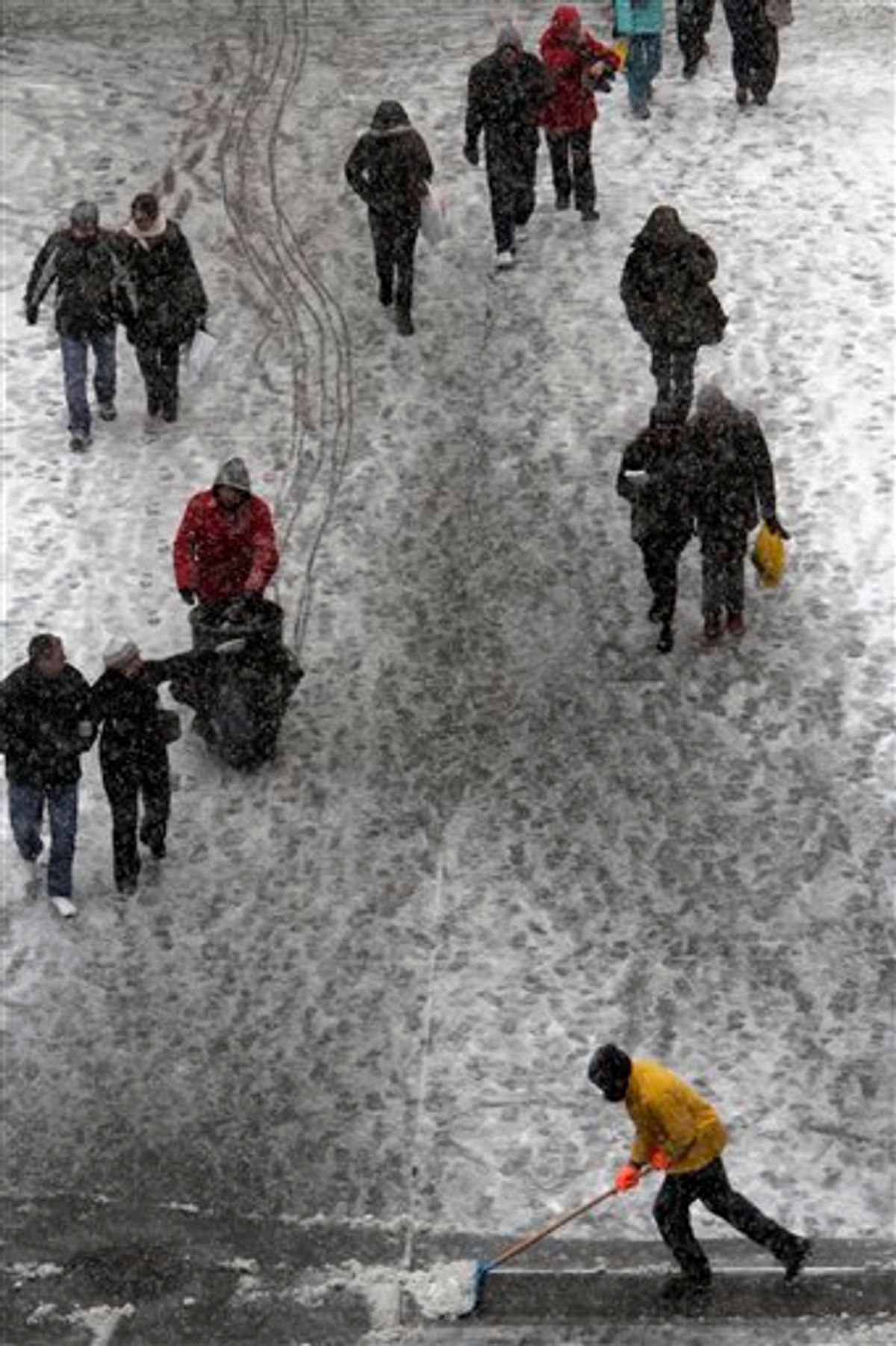 It took hours for Christopher Mullen to get off a plane from sunny Cancun and on to a half-empty subway car, his only way home. It would be another eight hours and more -- a night spent huddled under a thin blanket on the frigid, grungy car -- before he could get off the A train.

His feet soaked to the bone, with no food, water and hardly any heat, Mullen and 400 others lived through a New York nightmare on an elevated subway track, one of hundreds of stories of hardship caused by the crushing snowstorm that dropped more than 2 feet of snow on the Northeast.

By the time they got on the subway shortly before 1 a.m. Monday near Kennedy Airport, Mullen and his girlfriend were well into their ordeal battling the blizzard of December 2010.

Their flight landed two hours late. With snow whirling around the terminal, the airport train was down. There were no taxis. Wearing just a light spring jacket, Mullen stood in the snow and attempted to dig his car out from long-term parking. The only result: feet and legs that were soaking wet.

When the couple -- their diving gear and luggage in tow -- boarded the A train more than six hours after clearing Customs, it seemed that they were finally on their way. But the subway got only one stop before it was forced to stop by snow drifts piled on the outside tracks and thick layers of ice on the electrified third rail.

At first, it seemed the delay might be brief. A loudspeaker announcement said that a train up ahead was stuck on the track due to the weather and they were being held back. But the minutes stretched into hours.

The train was in the station, but in the dark of night with bus service down and car services shuttered, there was nowhere for passengers to go. Train operators kept the doors closed to keep out the cold, but the gusting winds rattled the windows and the chill of the storm seeped into the car, overpowering the faint stream of warm air coming from the subway car's feeble heaters. It wasn't quite cold enough for water in the car to freeze, but it felt nearly that bad.

The 400 on Mullen's train were unlucky, but they were not alone. The blizzard left thousands of travelers stranded, closing all three of the metropolitan area's airports and blocking most other means of transportation. Buses sputtered to a halt in snow drifts. Taxi drivers abandoned their cabs in the middle of New York's snow-clogged streets. At least one other subway train was stranded on the tracks.

"I just huddled with my girlfriend. We just tried to stay close. I was not dressed appropriately for the weather at all," Mullen said after the ordeal. "I didn't think I needed a heavy coat. I regretted my choice" to pack light.

Whenever cold air would hit his wet feet, he started to shiver, he said. "I was just concerned for staying warm. I was freezing."

Tensions in the car began to rise. No one was aggressive, but people were speaking forcefully to the conductor. Some demanded that city transit authorities bus them out. A mother with four children worried loudly that they had no water. Some worried about getting sick.

Men would walk onto the platforms connecting subway cars and urinate onto the tracks. Eventually, the train workers allowed passengers into the bathroom inside the train station. When it turned out that bathroom was heated, it caused a commotion.

"One woman came back and said, 'Oh my God, the bathroom is SO warm,'" Mullen said. She was very excited.

Twice, passengers called 911 and the Fire Department of New York responded. Passengers begged the emergency responders to take them away, but they were told they had to stay put, Mullen said.

At some point, it became morning. But the windows were too iced over to see the sun rise.

Finally, at around 9 a.m., the train began to move again.

Asked about the stranded passengers, Metropolitan Transportation Authority Chairman Jay Walder said, "We will of course take a look at that situation after the storm. I know it wasn't comfortable."

For Mullen, a 42-year-old art director for local cable news channel NY1, and his girlfriend, Melanie A. M. Hinds, it was another 3 1/2 hours before they arrived at his apartment. With no trains running to his Park Slope, Brooklyn, stop, they took a different subway, then made a fruitless attempt to find a car service to take them home.

Finally, a generous couple drove them as close as they could get. It took them 20 minutes to drag their luggage and gear three blocks, through snow drifts that, at times, reached 3 feet high.

Once he crossed the threshold, the first thing Mullen did was change into something dry.

From the plane to his front door, their 14-mile odyssey had taken them 18 hours.