The year in food

A look at the biggest food stories of 2010: We are one nation of eating extremes ... and extreme eating 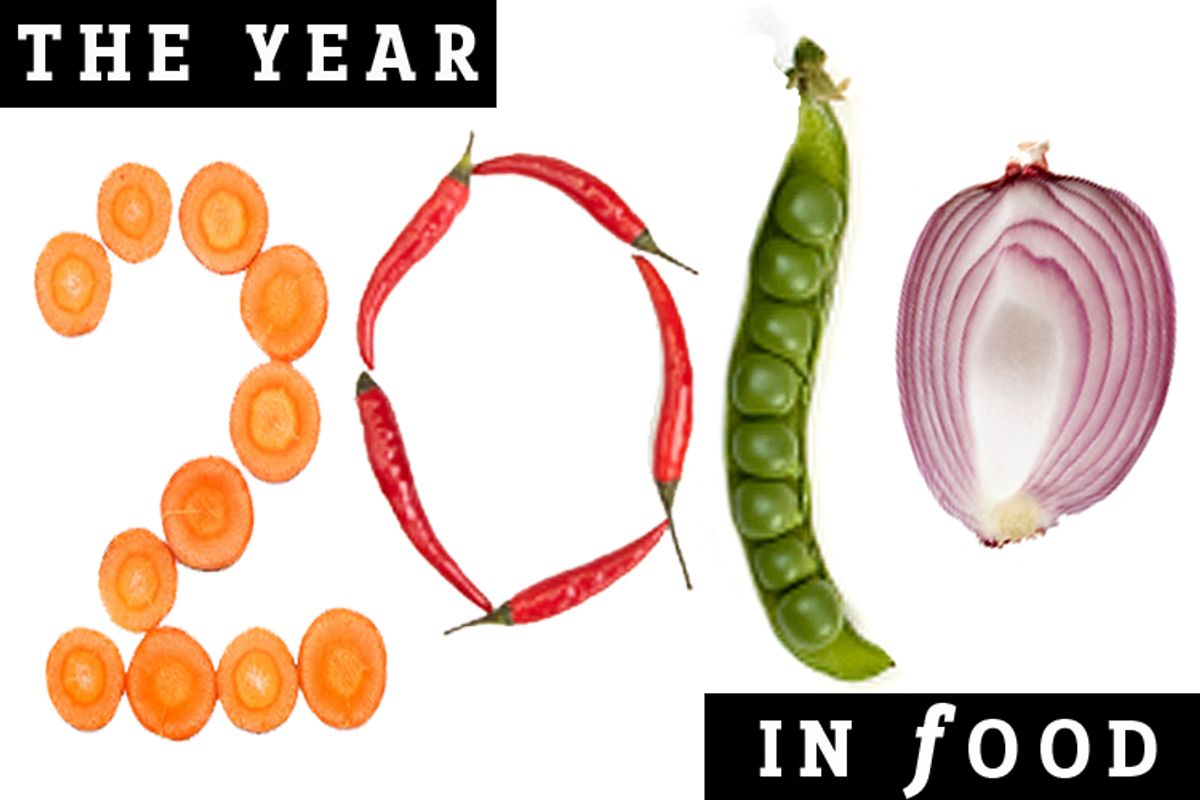 I'll start off with a naked admission: it is a fool's errand to recap the year in food. I mean, it's food. It's like trying to recap the year in breathing, or the year in being protected from the elements. But that's also exactly why we have to try -- food is so fundamental, so vital to our lives and culture that what and how we eat tells us so much about ourselves. And looking at the biggest stories of 2010 tells us that we're a people of passionate extremes, of trends that go off the rails and food fights for which we arm ourselves to the teeth. We go from being vegetarians to butchers, from prim fat-gram-counters to devourers of burgers that pack more calories than an Energon cube. And we drink Four Loko. And so, Salon presents: the food stories that made 2010 so hot, so tasty and so very, very greasy.

If the 2008 campaign nano-scandal of Obama's choice of hamburger mustard -- can you believe that elitist snob asked for Kraft-made Dijon? -- showed us anything, it's that the 2004 rubbing of John Kerry's nose in his Swiss cheesesteak wasn't an aberration. Rather, two years on, we have fully descended into the what-you-eat-is-who-you-are era of identity politics, as no matter big or small can escape the ever-politicized culture wars. Rush Limbaugh is out there touting the fact that a man lost weight eating only Twinkies as evidence that all nutrition science is hooey, because, as he said, "I know liberals, and I know liberals lie, and if Michelle Obama's gonna be out there ripping into 'food deserts' and saying, 'This is why people are fat,' I know it's not true." Sarah Palin tried, clumsily at best, to show us her every-gal workin' lady side by pretending to be a diner waitress on her TV show. And Glenn Beck tried to call Michelle Obama's campaign for healthier kids a communist plot to take away his … oh God, I don't even want to finish this stupid sentence.

On the other hand, the most productive / maligned Congress in history passed the biggest boost to child nutrition and school lunch funding in 30 years. So, hey: win!

8. The year in beverage: Raw milk and the one and only Four Loko

And in more socialist fascist American government news ... You wouldn't think there would be a lot in common between back-to-the-lander favorite, unpasteurized ("raw") milk and the insanely cheap, sweet, caffeinated and boozy Four Loko. But both of these found themselves in the crosshairs of authorities: raw milk for killing babies, and Four Loko for killing college-age babies' brain cells.

Despite supposed health benefits, small-farm-goodness, etc., fans of raw milk fight an uphill battle; the stuff is only legally for sale in 28 states. Four Loko, on the other hand, was widely available and marketed largely to urban (read: minority) young people but enjoyed by jackasses of all colors. Nicknamed "Blackout in a Can," it could make you feel hyper enough to rip the toilet out of the wall while you prayed to it, and it found consummate displeasure in state liquor boards. In an unusual move, authorities in New York, Washington, Michigan, Utah and Oklahoma banned this specific product, amid criticism of discrimination, unfair targeting, and just plain old waste-of-taxpayer-money weirdness. Interestingly, it was time for the young, liberal and reckless to rail against the Nanny State.

6. The KFC Double Down: The sandwich that launched a thousand defibrillators

2010 was the year we saw cynical blog-to-book sensation This is Why You're Fat -- which calls on readers to send in photos of outlandish food like bacon-wrapped cheesecake-stuffed fried chickens -- become reality. Corporate mainstream, find-it-on-any-corner reality.

But with all the entries to the gross-out food sweepstakes -- the Carl's Jr. foot-long burger, the IHOP cream cheese pancake stackers, the Burger King 9-inch Pizza Whopper -- one reigned supreme in its ability to get everyone in food media talking. The KFC Double Down, the cheese-and-bacon sandwich with fried chicken as the bread, blew everyone away with its brashness, its enthusiastic offensiveness, its gleeful thumb-in-the-eye to every doctor and chiding mother in America -- and even inspired a heart-stunning column of taste tests here on Salon. Yet, brilliantly, it wasn't anywhere near the highest calorie or fattiest fast food abomination in the land. And no one seemed to notice that, had they added a bun to it, no one would think anything of this new ho-hum double chicken sandwich. For that stroke of genius, we bow our heads in respect, if not for the fact that eating it was like getting beaten and left for dead in a salt mine. And speaking of salt ... after years of doomsday health warnings about low-density lipoprotein cholesterol and hydrogenated trans-fats, 2010's eat-this-and-you-die hoopla was mostly about ... salt and sugar. New York City Mayor Michael Bloomberg started off the year with fanfare, unveiling an official city list of guidelines on how much sodium food should contain. Cue the industry freakouts, the chefs daring the guv'mint to pry their salt out of their cold, dead, tattooed hands. But what people didn't notice, necessarily, was that 80 percent of the salt we eat comes from processed foods. So chill out, eat real food, and go ahead and learn to be friends with your salt shaker at home.

I would have started this next paragraph by saying, "Moving on to dessert, studies this year have also shown that our sweet tooth has now grown to Bugs Bunny-type proportions." But that would be wrong, because Americans now like everything sweeter than before, including their pizza, as Domino's found out by replacing their sauce with something just north of ketchup and finding millions of happy customers.

But are all sweeteners equal? Yes or no, the war on the ubiquitous-in-processed-food high fructose corn syrup (HFCS) looks like it might be a done deal at this point, with ginormous soda and food manufacturers catching consumers' drift and touting their new REAL SUGAR products. While we're no big fans of the syrup for its creepy environmental impacts, it is a little sad that what might be the nail in HFCS's coffin is a widely-misread study showing that fructose is particularly tasty and nutritious to cancer cells. (Technically, high fructose corn syrup has pretty much the same amount of fructose as regular sugar.) Score one for the earth and the humans, but not for the humans of earth to know the right way to use science ... or for them to actually eat sugar in moderation.

4. Cupcakes and their spawn

Moderation? But cupcakes are cute! How cute are cupcakes? They're so cute the English call them fairy cakes. They're so cute that 2010 marked something like the decade-long reign of cupcakes on the culinary scene brought about by, of all things, Sex and the City. (Yes, the longest-lasting food fad in recorded history was brought to you by a show about shoes.) But after 10 years on top, you could feel a revolution brewing; people are ready for the Next Great Cute Craze. And so we trotted out cake balls, which are what happen when you take a cake and frosting and squish them together and pretend like you just made something different. We turned to the French, with all their refinement, to love on their brightly-colored and myriad-flavored macarons. And we (like, four of us) tried to man up the cupcake with, er, "manly" flavors at the Butch Bakery like Rum and Coke, Mojito, and the tellingly-named "Driller." But try, try again, folks. Word on the street is that D'Iberville, Miss., just got its third cupcake shop. This train just keeps on running away in high heels.

3. Food trucks! People are selling food from trucks! Some of these people have culinary and even college degrees, unlike all the working class immigrant people who have been doing this for decades! Also: Twitter!

OK, are we done talking about this yet?

For the better part of a century, Americans have reveled in the easy availability of meat, once reserved for when times are flush. But then came nofun-niks like ... doctors and animal lovers and people who think that whole climate change thing isn't a conspiracy made up by liberal scientists. OK, well, I guess we should rethink how much and what kind of meat we eat, and 2010 saw intense wrangling from all sides, but with a new character -- sexy hip butchers. Some are sustainable-meat advocates, some are throwback craftspeople, some are beardos, some observe Meatless Mondays, and some are even vegetarians. Almost all of them, though, preach the culinary, environmental and ethical importance of eating less meat but better meat, and some of them will even invite you to a butchering party to get their point across.

Here on Salon, we also considered and wrestled with our own relationships to meat, from strong and strange desires to eat horse to my killing a chicken for your amusement. (I wasn't so glib at the time.) But it's a complicated world for ethical omnivorism, and it turns out that it's not just politics and religion that get people fired up to argue at the table. Whether or not to eat the beef does, too -- especially if you were a vegetarian seduced, sexually and carnivorously, into the carnal pleasures.

1. Gulf seafood, on the ropes

And in the year's most painful story, barely-hanging-on Gulf fishermen watched their livelihood and, for many, their lives, get coated in a shiny slick of poison. I remember watching TV footage of the Deepwater Horizon on fire, thinking, "Boy, that looks nasty." Then it sank. Then the oil bubbled up. And then we were in for months of bleeding.

In May, we ran a piece on whether or not you should avoid Gulf seafood -- the word then was that the product was still fine, but that the fishermen feared that panic would set in, collapsing their market, already fragile from cheap imported seafood. A month after, we found ourselves writing on the collapse of P&J Oysters in New Orleans, losing our nation's oldest oyster shucker and an integral part of that city's culture. And now, a million years of news cycles later, no one talks about the spill, no one talks about the seafood, no one talks about these fine people. Through the misery, New Orleans lived up to its reputation for fun and humor, with grocery stores baking BP thank-you cakes. And as for the poor shrimp… well, can you blame them for going on Prozac? So if you made it this far, thank you. And now looking back over our little year-in-food retrospective, it does seem awfully heavy on the, well, heavy. Conflicts and arguments and this'll kill you and that'll kill all of us. Well, as my high school English teacher told me, you always need conflict for a good story.

But let's not walk away from this little exercise thinking only of alimentary disaster. How was your year in food? What did you learn, what did you love, what did you make, what did you share? For me, 2010 was wonderful at table, filled with meals with friends and loves, sharing flavors and cultures, eating Chinese American food made by Italians and Italian food made by Chinese. I found a new favorite fish, I conquered a fear of baking bread, and a master taught me how -- and more importantly, why -- he fries chicken. I hope you have stories and meals you can cherish the same way. And I hope you'll spend 2011 eating, cooking and thinking joyfully. Even if you are slugging down bacon cupcake burgers at a food truck.