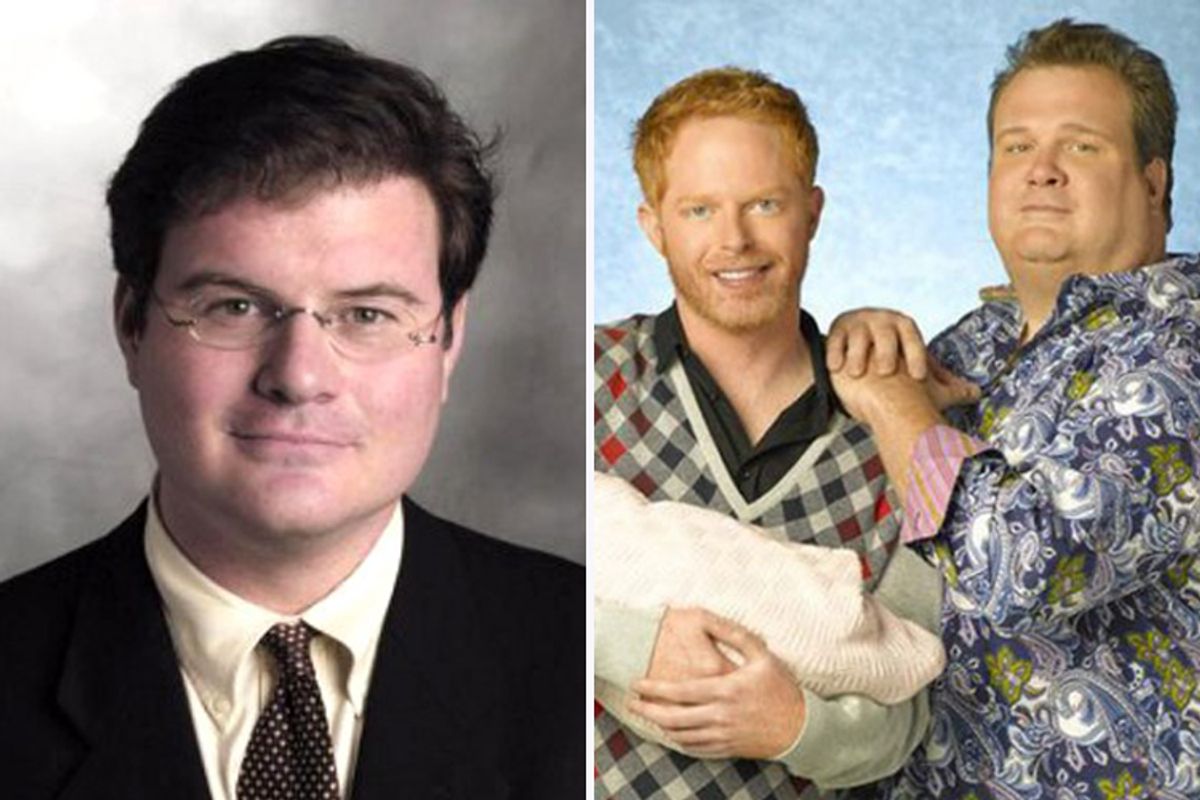 Jonah Goldberg has a doozy of a syndicated column today arguing that the repeal of "don't ask, don't tell" and the inevitability of gay marriage are both Officially Good News for Conservatives, because they are Bad News For Liberals, because now the gays are bourgeois. As we all know, what liberals have always actually wanted is not "equality" or "equal rights," but for our radical bohemian values to undermine society until it crumbles and we can erect a glorious anarchic state built on free-gay-child-love. But gay marriage will ruin our plans!

A smart person could write a good column about the trajectory of the gay rights movement, the long journey from Gay Liberation to NOH8, the story of how America deals with radical movements by eventually allowing formerly marginal minorities to join mainstream society. But Jonah Goldberg is not a smart person and this is not a good column.

The column encapsulates Goldberg's pathetic conservatism: It's a philosophy defined entirely by opposition to whatever those stupid liberals want. There's no principle beyond the adolescent desire to be contrary.

Two decades ago, the gay Left wanted to smash the bourgeois prisons of monogamy, capitalistic enterprise, and patriotic values and bask in the warm sun of bohemian “free love” and avant-garde values. In this, they were simply picking up the torch from the straight Left of the 1960s and 1970s, who had sought to throw off the sexual hang-ups of their parents’ generation along with their gray flannel suits.

As a sexual-lifestyle experiment, they failed pretty miserably, the greatest proof being that the affluent and educated children (and grandchildren) of the baby boomers have re-embraced the bourgeois notion of marriage as an essential part of a successful life. Sadly, it’s the lower-middle class that increasingly sees marriage as an out-of-reach luxury. The irony is that such bourgeois values — monogamy, hard work, etc. — are the best guarantors of success and happiness.

Any sources or citations for quote for any of this? (Monogamy is the best guarantor of success! QED!) No. But don't worry, he has a really good example coming up:

The gay experiment with open bohemianism was arguably shorter. Of course, AIDS played an obvious and tragic role in focusing attention on the downside of promiscuity. But even so, the sweeping embrace of bourgeois lifestyles by the gay community has been stunning.

Nowhere is this more evident — and perhaps exaggerated — than in popular culture. Watch ABC’s Modern Family.

Yep. "Gay people are all bourgeois now, I learned it on a TeeVee show I watch. Liberals stink!"

The sitcom is supposed to be “subversive” [no it isn't] in part because it features a gay couple with an adopted daughter from Asia. And you can see why both liberal proponents and conservative opponents of gay marriage see it that way. But imagine you hate the institution of marriage [only cartoon caricatures of radical leftists go around consciously "hating the institution of marriage" but OK] and then watch Modern Family’s hardworking bourgeois gay couple through those eyes [but if I hate the institution of marriage why the hell am I watching "Modern Family"?]. What’s being subverted? Traditional marriage, or some bohemian identity-politics fantasy of homosexuality? [Can a "bohemian identity-politics fantasy" be "subverted"...? Does anyone read these things before they're published?]

Goldberg goes on to note that Republicans love family but Democrats love murder, according to science:

By the way, according to a recent study, Modern Family is the No. 1 sitcom among Republicans (and the third show overall behind Glenn Beck and The Amazing Race) but not even in the top 15 among Democrats, who prefer darker shows like Showtime’s Dexter, about a serial killer trying to balance work and family between murders.

That study seemed like nonsense (conclusion: self-proclaimed conservatives like high-rated popular television shows slightly more than self-identified liberals do, and liberals also like less highly rated shows) but its methodology has nothing to with its relevance to Goldberg's point, which is none.

And we end on this note:

Personally, I have always felt that gay marriage was an inevitability, for good or ill (most likely both). I do not think that the arguments against gay marriage are all grounded in bigotry, and I find some of the arguments persuasive. But I also find it cruel and absurd to tell gays that living the free-love lifestyle is abominable while at the same time telling them that their committed relationships are illegitimate too.

Jonah goes on to explain what he means when he says gay marriage will be both good and bad, and he elaborates on which arguments from gay marriage opponents he finds so "persuasive," despite his obvious sympathy for the cause of gay marriage. Oh, wait, no he doesn't. He doesn't do any of that, he just ends the column with a dumb attempt to coin the term "HoBo."

So I'm guessing that he doesn't actually have any reason at all to think that gay marriage will be bad for anyone, but he has to pretend that he does, because otherwise K-Lo will cry, or something. Who knows.

I thought this would be the dumbest thing I read at the National Review Online today, until I read this, which notes that Mexico has only one gun store and comes to the conclusion "Less Gun Stores, More Crime"; and this, another episode of the on-going series "Andrew McCarthy proves that liberals love Islamofascists" (tonight's smoking gun: a New York Times profile of a Lebanese newspaper editor); and this astounding single paragraph from someone named Charlotte Hays that insists that snow will make people conservative, because it proves that government doesn't work. (Did the private sector plow Park Slope yet...?) Ms. Hays wrote a similar piece the last time it snowed, about how snow proves that the government doesn't work because the USPS website didn't announce that post offices would be closed. ("A murmur of approval greeted my suggestion that he call his boss and urge USPS to post information about delivery on their website, as any normal, unsubsidized business would have done by now." Tell that to every New York restaurant on SeamlessWeb, lady.)