I rolled my eyes at the dowdy dresses my mother sent, but I didn't understand then what she was really giving me 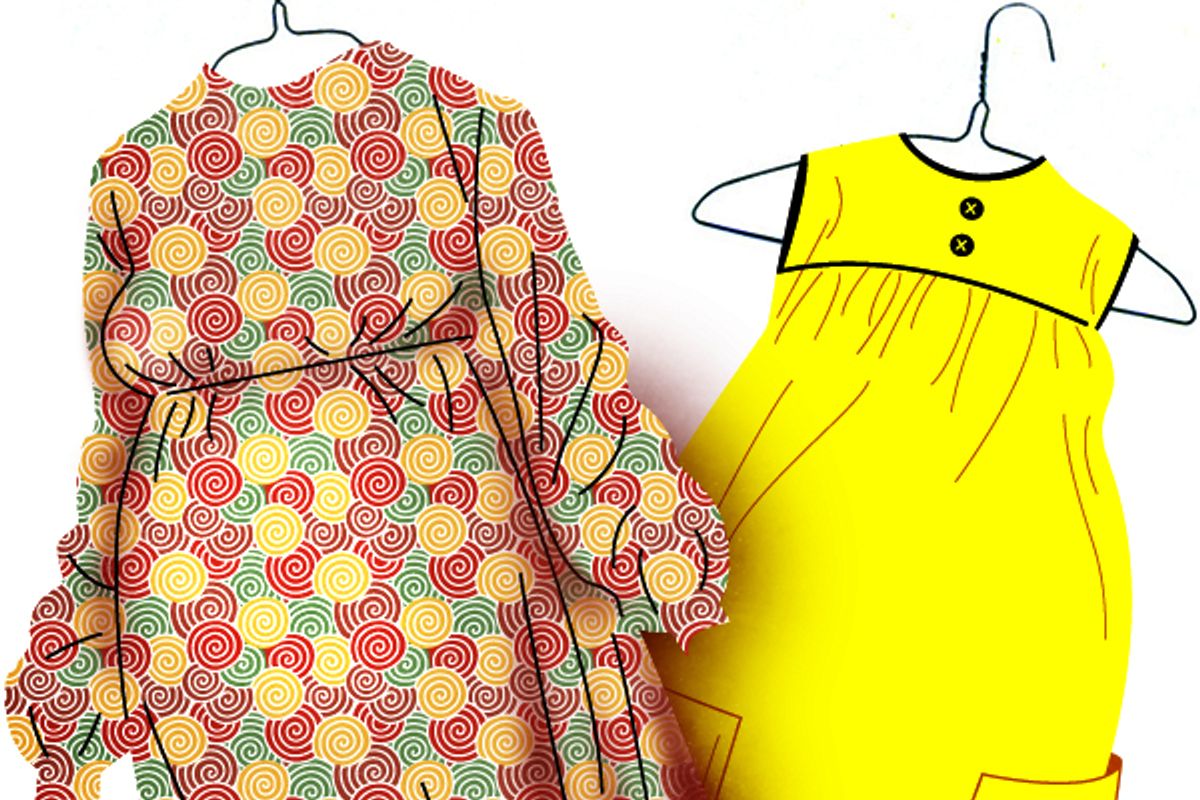 A few months into my first pregnancy, I got a phone call from my mother.

There was a long, portentous pause. I wondered if Mom was about to reveal a family secret, something that could only be passed along to pregnant daughters. Then again, my mother is capable of making a dramatic production of advising me to eat more dark, leafy greens.

"Yes?" I asked, with some trepidation.

"Oh, nothing serious. I mailed off the baby clothes today."

I relaxed, relieved that there would be no drama. For over 30 years my mother had carefully saved a box of her children's baby clothes, many of them hand-knit by my grandmother. I smiled, imagining those tiny hats and sweaters on my own child. Then Mom dropped her bombshell.

"Oh, and I'm sending the maternity clothes, too," she added, casually.

"Well, mine, of course. The ones I wore when I was pregnant with you!"

The enthusiasm in her voice made me blanch. "You saved your maternity clothes?"

Had I been one of those hip mamas so ubiquitous in my Portland neighborhood, sassy in their retro outfits, I might have been excited by this news. But I've always been a jeans and sweater gal. Besides, I was barely ready to contemplate maternity clothes at all -- let alone don the pregnancy garb of 1965.

She cut me off. "These are perfectly good clothes. You could wear them to teach in! There's a lovely dress, lime green with blue polka dots. I know how it sounds, but wait till you see it. And there's a navy outfit with big white buttons -- what's wrong with that? Really, they're classics."

I tried to squelch the horrid vision that arose: myself in one of these ensembles, facing a class of gawking and snickering adolescents.

"Uh, I appreciate the thought, Mom, but no thanks," I told her.

My mother was not to be put off. "Do what you want with them, but I'm sending those clothes."

I recognized the obstinate note in her voice. My mother joined the Peace Corps in her 60s. She performs in local theater and goes dancing every Friday night. "She's so hip," say my friends, admiringly. They're right -- up to a point. That point ends at clothing and items with sentimental value. Both were colliding here. Clearly there was nothing imbued with more sentiment in Mom's mind than the garments she'd worn when carrying her "firstborn."

I knew when I was defeated. "Fine, send them along," I said, resigned. "But I'm not wearing them."

A week later, the box arrived. Its contents would have elicited a shudder from even the most retro-chic pregnant hipster: the thick yellow cotton dress with black buttons and piping (for that pregnant bumblebee look), a brown wool number with a drawstring under the breast, and the dreaded lime-green and blue polka-dotted smock, which even my old Holly Hobbie doll would have scorned. That my mother believed I might wear these dowdy dresses was preposterous.

If I'd had any sense, I would have told Mom I loved the clothes and was wearing them every day. But I couldn't bring myself to lie. Instead, those vintage maternity dresses haunted our phone calls for months.

"So, are you wearing them?" my mother would ask.

Never a diplomat where family is concerned, I told her frankly that it would be a cold day in Hades before those fusty old threads got near my pregnant body.

"Ungrateful girl!" she retorted. "I spent good money on those clothes."

Eventually, my approaching due date overshadowed the clothes as a topic in our conversations. But though I never told my mother, I actually did wear her maternity dresses. Just once anyway, for a select audience of friends. There were universal groans as I emerged from my bedroom in each outfit.

"Um, what about jazzing it up with tights and boots?" offered one friend gamely after I struggled into the scratchy brown wool dress. I rolled my eyes and reached hastily for the zipper. My mother must have been a toothpick back in the day; this outfit barely fit over my belly. Not for the first time, I was thankful to be pregnant in an era with more sartorial options than the ones available to my mother's generation. These high-waisted smock dresses, with their big collars and floppy bows, made me resemble a pregnant little girl. I couldn't shed them fast enough.

It took awhile for my mother to stop harrumphing about my refusal to wear her maternity clothes. But by the time my baby boy turned 2, Mom had bigger fish to fry: Now she focused her energies on pestering me to produce a sibling for him. This time, I was happy to oblige.

Eight months after my second – and last – son was born, I was collecting items to take to the consignment store when I came across a box of my own maternity clothes in the back of the closet. There were the loose, comfy cardigans, the jeans with their stretchy panels, the overalls I'd vowed to burn as soon as I gave birth. All supremely forgettable -- except one item.

It was a dress I'd found in a resale shop. Made of wine-colored velvet, it was long, with close-fitting sleeves and an empire waist. No matter how awkward and huge I'd been in my last trimester, when I donned this dress, I felt graceful and dignified, like a pregnant Jane Austen heroine.

I took the dress from the box and held its soft folds against myself. I'd been wearing this the day my husband surprised me in front of the mirror, ruefully surveying my girth and wondering if I would ever go into labor. He put his arms around my huge belly. "Now I understand why ancient cultures worshiped fertility goddesses," he whispered.

Grappling with a nurse-all-day baby and a contentious 3-year-old, I hadn't spared a thought in months for those final, mysterious weeks of pregnancy, for the anxiety and overwhelming anticipation of those days. I looked at the dress again. I couldn't get rid of this. I wanted to pass it on. With a sudden pang, I remembered how cavalierly I'd rejected my mother's maternity clothes. Sure, they were frumpy. I never would have worn them. But now I knew what emotions those dated dresses represented. I understood why she kept them for me. If I'd had a daughter instead of two sons, I realized, this velvet dress would be saved for her. For her to reject if she pleased, but saved nonetheless.

In my situation, my mother would undoubtedly have set aside the dress for a future daughter-in-law. That much moxie I don't have. Instead, I mailed it to a friend who was expecting a girl. Maybe she would end up saving it for her own daughter. I couldn't help hoping she would.

Kate Haas is an editor at Literary Mama. She writes about books, motherhood and Peace Corps Morocco in her zine, Miranda. Her essays have appeared in Brain,Child, Babble and the Toronto Star. Her website is Katehaas.com.