The problems are on the ground, not in the air. On the plus side: Sweet unplanned Belgian vacation for the Pilot! 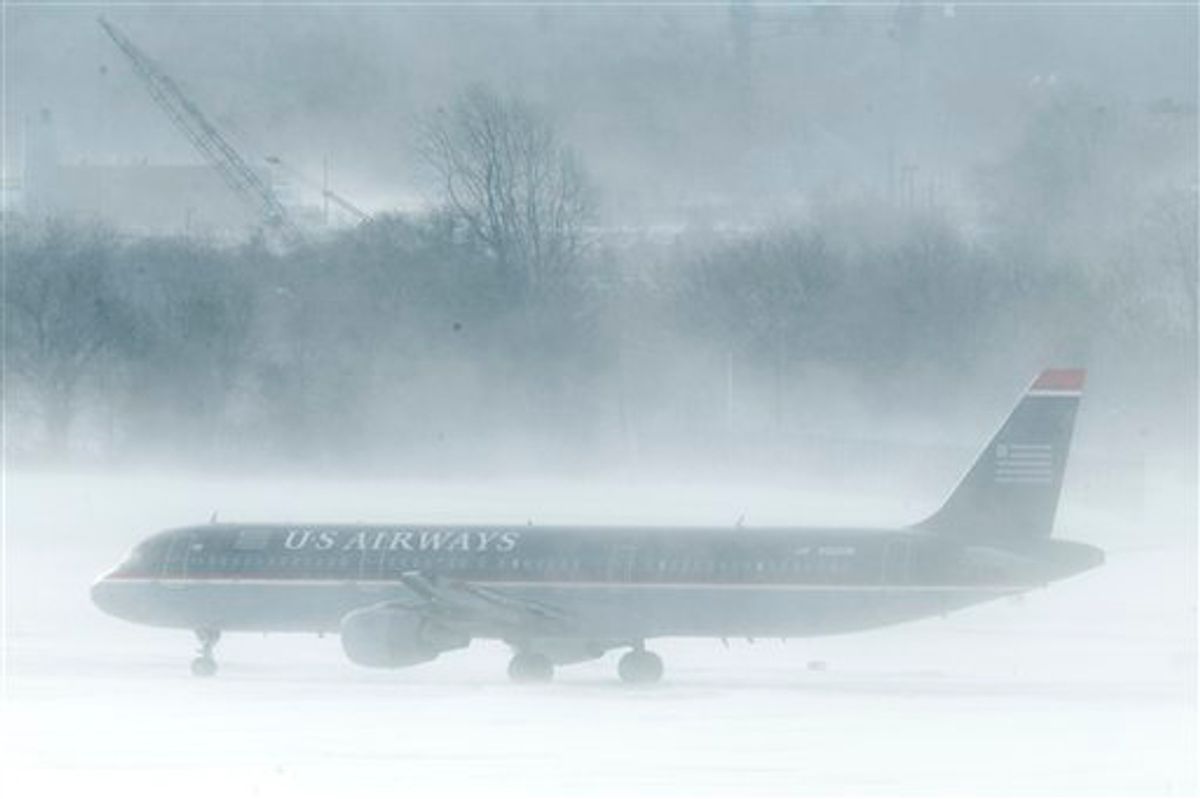 A U.S. Airways jet is seen amidst snow blown by gust of wind at the Philadelphia International Airport in Philadelphia, Monday, Dec. 27, 2010. A powerful East Coast blizzard menaced would-be travelers by air, rail and highway Monday, leaving thousands without a way to get home after the holidays and shutting down major airports and rail lines for a second day. (AP Photo/Matt Rourke) (Matt Rourke)
--

As this column goes live, word is coming out of an accident in Wyoming involving a 757 that may have skidded off a snowy runway. Little is known at this point, and I'll be en route to the U.S. as the story develops. I'll get to it later, in other words, if the story warrants.

BRUSSELS, Belgium -- Quick, how do you turn a pilot's 24-hour European layover in Brussels into a 120-hour European layover? Easy, just send a snow hurricane roaring through the Northeast corridor. I should call myself lucky, I guess. Other travelers have suffered far worse fates these past few days than a paid-for Benelux exile.

While the rest of you were stranded on tarmacs, sleeping under benches and sucking on discarded Chick-fil-A wrappers, I've been sightseeing and sipping on hot chocolate. Yesterday I hopped the train up to Ghent for a view of the newly restored Van Eyck altarpiece at St. Bavo's Cathedral.

Not to rub it in or anything.

The white stuff has been falling in Belgium too. Looks like I timed my arrival just right, as it were, smack in between the big European storm of two weeks ago and now the American one. I had dinner yesterday with a friend of mine, an Associated Press reporter who's based here. He said they never, ever get snow like this. And as a result, there was chaos across much of Western Europe. There were countless cancellations, thousands of airline passengers stranded. Brussels and Paris ran out of de-icing fluid.

The other day I shared a taxi with a fellow who'd finally made it back from London after several days of delay. Like many people he was less than impressed by the way British airport authorities had handled things, but had a special theory as to their lack of preparedness. "You know what the problem is?" he offered up.

"No, what? What's the problem?" Something in his voice gave me a bad feeling.

"The problem is that Europeans are idiots. They are buying into all that global warming shit. They aren't investing in snow-removal equipment because they actually think it's getting warmer!"

I see. I wasn't in the mood to tell him, but he's got it exactly backwards. The climate change models in fact predict snowier winters for northwestern Europe, with more frequent and intense storms.

Anyway, wherever they came from, these Christmas bookend storms have not only been a nightmare for passengers, but will prove murderously expensive for the airlines. Total losses will be counted in the billions.

And what is it, exactly, about winter storms that brings air travel to a halt?

Low visibilities, strong crosswinds, slick runways, potential icing -- all of these things spell trouble for pilots and cause horrendous air-traffic backlogs. But, as a rule, they aren't phenomena that airplanes or their crews can't handle. Generally, it's not the in-the-air aspects of a snowstorm that cause chaos, it's the on-the-ground aspects. Runways and taxiways need to be plowed and treated, while tarmac logistics go to hell as snow and ice accumulate. Luggage and cargo handling, fueling -- everything slows to a crawl as personnel and ground equipment get bogged down in the slush.

Not to mention delays caused by de-icing. Planes cannot take off with ice or snow adhering to the wings, and need to sprayed down by a heated mixture of water and glycol. Sometimes planes are de-iced at the gate, other times it's done remotely. Either way, depending on conditions, this can take a half-hour or more per plane, and to preclude further buildup it needs to be done as close to departure as possible. (And with fluid costing upwards of $5 per gallon, airlines dread snowstorms almost as much as strikes, fuel-spikes and recessions. When you add in handling and storage costs, spraying a single jet can cost tens of thousands of dollars.)

Crews take de-icing seriously, and while it seems pretty casual to the passenger, the spraying procedure is actually a regimented, step-by-step process. Procedures vary depending on the type of fluid used, ambient temperature, plus the rate and type of precipitation. The airplane needs to be configured a certain way, and pilots stay in contact with the de-icing coordinator. (The de-icing guide in my manual is about 20 pages long, with a series of graphs and charts.) We keep track of something called "holdover time" to determine if and when a second round of de-icing might be necessary.

There's much that can't be avoided. However, it does seem that winter storm delays are worse than they used to be. When I was a kid, a few inches of snow meant almost nothing. By comparison, a couple of weeks ago I waited at LaGuardia Airport for over three hours trying to catch a shuttle flight up to Boston. The culprit? Less than two inches of snow at Logan.

What's happened, mainly, is that our snow removal techniques haven't kept up with the growth in air traffic. And to some degree they can't keep up. There are roughly twice as many planes flying as there were a quarter century ago, while our airport and air-traffic control infrastructures have hardly changed. In the 1980s, closing a runway for 35 minutes so it could be cleared and treated had comparatively mild repercussions. Today, literally hundreds of flights can be affected.

For more on winter flying, icing and de-icing, see this 2009 column