Michele Bachmann revealed: Gore Vidal made her a Republican

The Minnesota congresswoman was apparently a liberal, until she read "Burr" 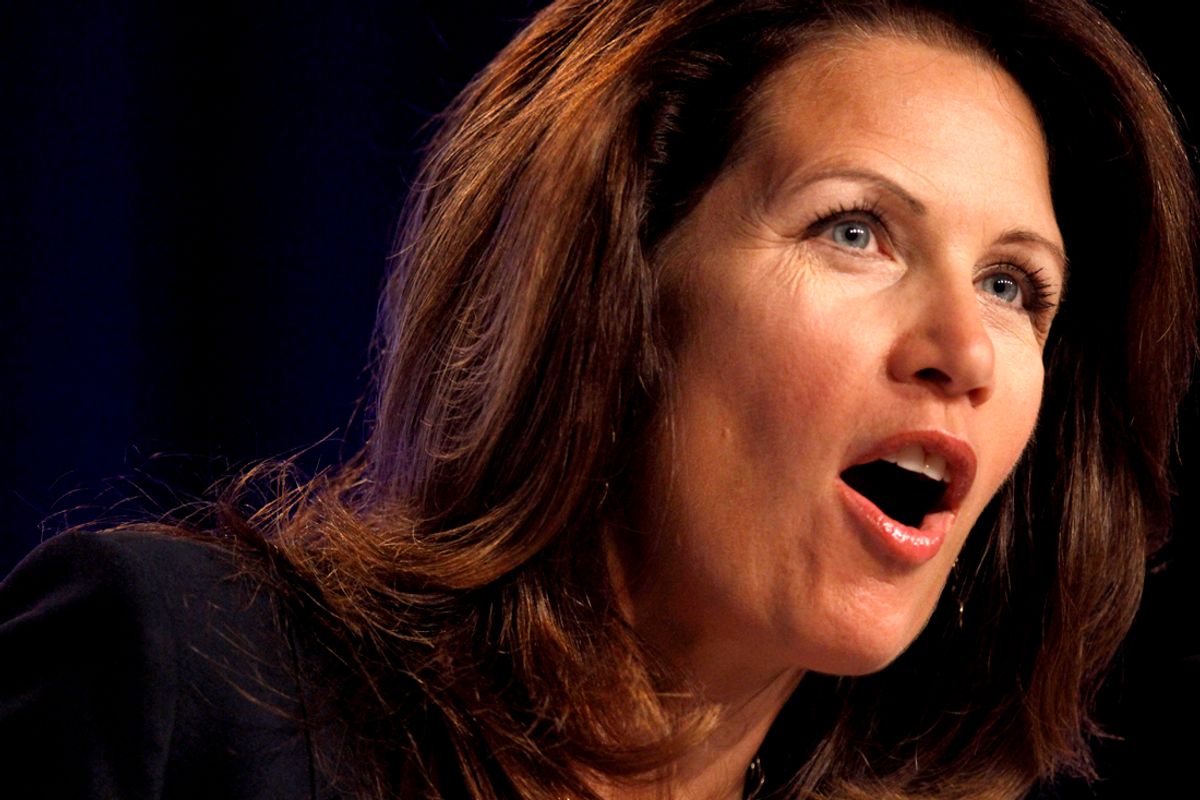 Every good conservative icon needs an origin story. The best ones -- the vast majority of them, if you believe them -- are former liberals, "lifelong Democrats," or even former Marxists. They become virulent right-wingers, usually, because of something horrible the Democrats did. Reagan was a Democrat -- and a union leader! -- until, in his formulation, "the party left me." (Around the time the party began supporting civil rights legislation, but that's neither here nor there.) But big events, or supposed betrayals, work best; 9/11 awoke the inner General Turgidson in every supposedly former liberal warblogger.

For Michele Bachmann, it was historical fiction.

Yes, Michele Bachamnn was a liberal until she read Gore Vidal's "Burr." Bachmann tells the tale of her creation about five minutes into the clip:

Until I was reading this snotty novel called 'Burr,' by Gore Vidal, and read how he mocked our Founding Fathers. And as a reasonable, decent, fair-minded person who happened to be a Democrat, I thought, 'You know what? What he's writing about, this mocking of people that I revere, and the country that I love, and that I would lay my life down to defend -- just like every one of you in this room would, and as many of you in this room have when you wore the uniform of this great country -- I knew that that was not representative of my country.

And at that point I put the book down and I laughed. I was riding a train. I looked out the window and I said, 'You know what? I think I must be a Republican. I don't think I'm a Democrat.'

Yep! Gore Vidal's "Burr" created Michele Bachmann. Because it was "snotty" to the founding fathers.

In my perhaps unrepresentative experience, Vidal's historical fiction -- especially "Burr" and "Lincoln" -- are the only things Vidal ever wrote that conservatives like. (I mean, thank god Michele didn't pick up "Myra Breckenridge.") But those are the conservatives who, I guess, are adult enough to read a mostly historically accurate account of the Revolution in which the Founders are portrayed as recognizably human and not become offended that the book is not a literary adaption of the Schoolhouse Rock classic "No More Kings."

Even if you dispute his characterizations, anyone with a genuine interest in our founders can find something worthwhile in "Burr." Unless Bachmann -- who's twice as smart as Palin but a much deeper believer in her brand of revivalist bullshit than the Alaskan opportunist -- never actually read the damn thing, but she knows that Gore Vidal is a gay liberal commie, and therefore to be hated.

And, christ, it looks like Michele's been dining out on this stupid story for years. She told it to the Minneapolis Star-Tribune ("He was kind of mocking the Founding Fathers and I just thought, 'What a snot.'") and she even told it to George Will ("I set the book down on my lap, looked out the window and thought: 'That's not the America I know.'") I'd imagine Will was somewhat confused, because it's a bit like saying his silly baseball books made me a leftist.

Barely related: Here's Pat Buchanan and Gore Vidal talking about Lincoln, syphilis, and Hemingway, in 1984. One highlight comes shortly after the five-minute mark, when Vidal reveals which one film he considers a true work of art.