Aaron Sorkin's dialogue is the real star of the Facebook movie. But in one tense sequence, David Fincher takes over 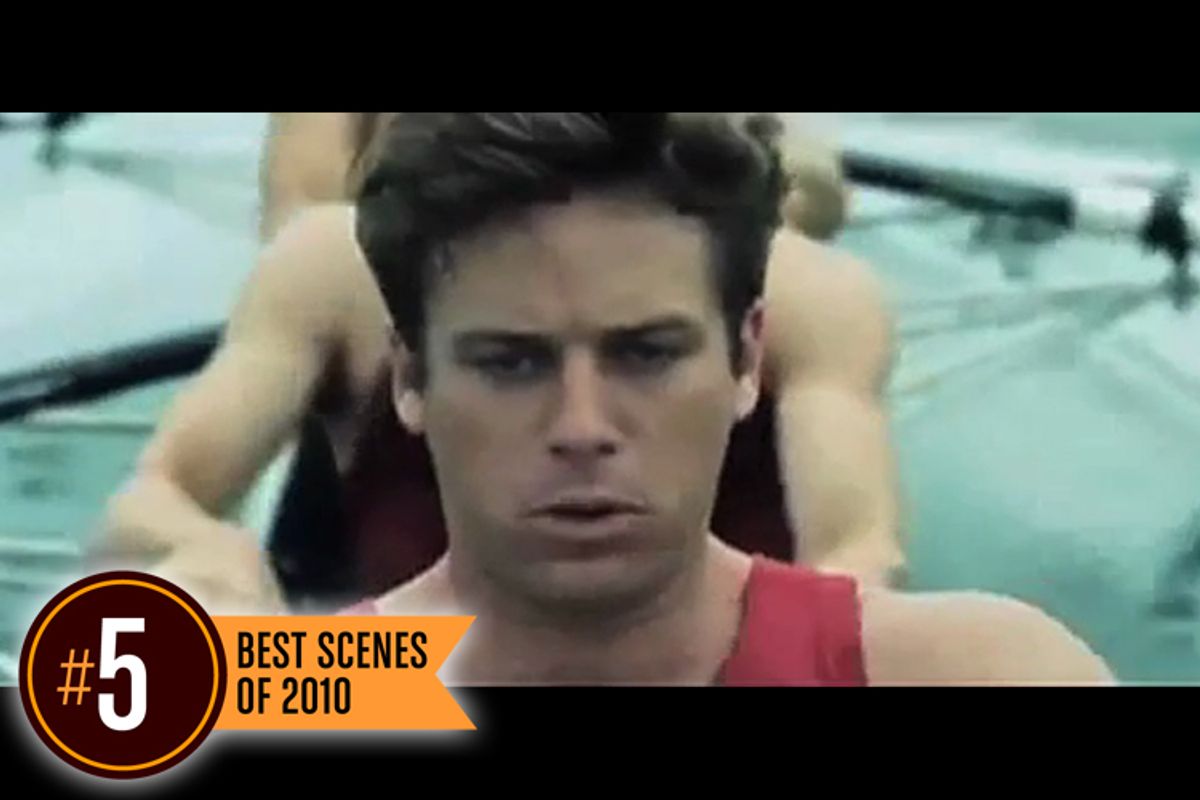 As written by Aaron Sorkin, this riff on the ego wars surrounding the creation of Facebook consists almost entirely of actors delivering rapid-fire dialogue in close-up. Sorkin's belief in the primacy of the word ensures that everything he writes -- from features like "A Few Good Men" to TV shows like "Sports Night" and "The West Wing" -- has a sawdust-and-footlights feel. David Fincher's adaptation of "The Social Network" is easily the most theatrical-feeling Sorkin story yet. The film has a spiky energy reminiscent of old Hollywood, a snap that can come only from a well-constructed script and merciless forward momentum.

But it would be a mistake to say "The Social Network" merely transcribes Sorkin's script to the big screen. Fincher's direction is unassuming, save for a few cocky technical flourishes (such as hiring a single actor, Armie Hammer, to play Facebook founder Mark Zuckerberg's identical twin nemeses, the Winklevoss brothers). But that's not the same thing as bloodless. As New Yorker film blogger Richard Brody pointed out:

Fincher uses his camera to go beyond the script to reach a high level of the art of portraiture — mainly done with fixed-frame shots that look long and hard and deep at the characters. In the October issue of American Cinematographer, Michael Goldman quotes the film's director of photography, Jeff Cronenweth, on the way that he and Fincher, shooting with a digital camera, contrived to get very shallow depth-of-field ... The effect is to keep characters in sharp focus and throw the background out of focus, in a classical visual trope of portraiture.

There's one spectacular exception to Fincher's otherwise modest approach: the rowing sequence. For about 90 seconds, the motor-mouthed script falls silent, and Fincher — a master of sumptuous imagery and geometrically exact cutting — takes over. The rowing scene works on its own as a short film about athleticism and entitlement — a portrait of rich young men who thought success was their birthright being crushed and humiliated. But there's much more going on in this scene, and it comes from Sorkin's theatrical flair and Fincher's wicked playfulness as he interprets it. Between the retro-19th-century boater hats on the male spectators and Fincher's use of special filters to make the whole thing look like a child's play set, the sequence feels like a high-tech homage to one of Sorkin and Fincher's inspirations, "Citizen Kane." The contest might as well be taking place inside one of Charles Foster Kane's snow globes. When that final buzzer sounds, the glass breaks, and Zuckerberg's foes are washed away in the flood.